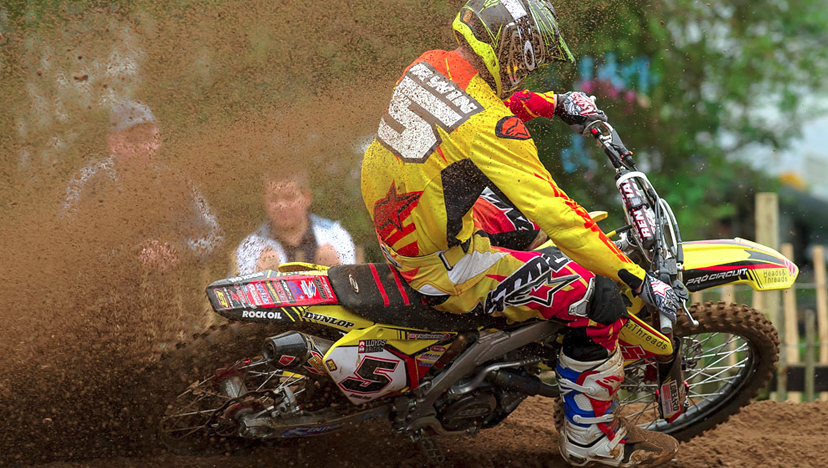 For Heads & All Threads Suzuki, Lyng in Norfolk is an hour or two up the road, and the Cadders Hill track on the outskirts of this tiny village hosted the second round of the Maxxis British Motocross Championship this past weekend.

Qualifying on Sunday morning didn’t get off to the greatest of starts. MX2 rider Luke Burton experienced some power issues and only got to go out for a quick lap with a minute or three to go, resulting in a thirty-first place. Colleague Ryo Sato quickly had to adapt to the odd track surface too, qualifying in thirty-fifth. In the MX1 class, Graeme Irwin finished the qualifying session in seventh, and in the subsequent super-pole improved that position to fifth.

For Burton, things went from bad to worse to better. After two crashes put him on the ground early on, he fought his way back to twenty-fifth in the first race. He followed that up with another start in the back of the pack, but fought his way forward throughout to end twenty-first. The final race was the best of the day. Off to a start just outside the top twenty, Burton made modest progress to eighteenth, where he finished the race after a consistent run. His points put him in twenty-third overall on the day.

Sato made some progress throughout the day. A first race start in thirtieth topped out in twenty-third, points just seconds out of reach. A bad start in the second race left Sato in twenty-sixth, and while a crash early in the last race cost him several positions, he was consistent throughout to end twenty-seventh.

After his stellar qualifying session, Irwin had an up-and-down first race that did not deliver much progress. A slow start early on dropped him back, but he soon recovered to end one place up. The second race had better beginnings, although the good start evaporated in a crash that set him back to eighth. A consistent race followed with an end result in seventh. As if to apologise for a bad showing, Irwin then pulled a stunner of a third race out of the bag. Second only to leader Shaun Simpson, Irwin had to concede two places by race’s end to finish fourth for a sixth place overall.

It’s been an OK day today with the MX2 guys. The MX2 class is so competitive, and today again we struggled with starts. In the last race Luke was twenty-second off the gate and that was a good start for him, and he worked his way up to eighteenth, it’s points that we’re looking at getting at the end of the day. Ryo is nearly last out of the gate every time. We tried something today and it didn’t work, but we’ll just keep trying. If we can get a good start, I believe both can be in the points. With Graeme, what I’m seeing in the week riding-wise is fantastic, and I saw that in the last few laps of the last race. The second race was good, and the last one was awesome as well. We’re getting things back together and moving forward. We’ve had a lot of stuff against us and it’s coming the right way at the moment. — Neil Prince, Team Manager

We started the day on the back foot. I had done a few laps in qualifying and knew there was something wrong with the bike, so we swapped over to the spare bike with just a few minutes left and it felt much better. Afterwards, we had a look at it and there was nothing obvious on it to tell us what was wrong, so I went back out on the race bike. It was still lacking power, I also made a few mistakes and a couple of crashes, and I wasn’t very happy with the result. Went out for the second race, had a terrible start, fell off the bike again twice, and the bike started to deteriorate more and more. Then when my mechanic was washing it, he noticed that it was leaking oil, so I had to get the spare bike out, which was bog standard with just my suspension settings. That bike felt like a rocket ship! It’s still not obvious today what the problem was. It’s been a disaster weekend but I’ve come away from it positively; I’m happy that we’ve gotten somewhere, we’re moving forward and we know where the problem is. Thanks very much to Neil and Rob for their patience for trying to solve this. — Luke Burton, MX2 #40

I did better than the last race, but I have to improve my starts more. I’ll also try to improve my position from bad to good to best next! — Ryo Sato, MX2 #99

The first race started off pretty bad, I rode a bit like an amateur to be honest. I started off seventh and then dropped to fourteenth, just trying to make passes and guys from behind coming through and it wasn’t very good. Then I got back to ninth but I wasn’t happy with that at all. Second race I got a good start, was fourth, then Brad and I got together and we both went down. That’s the way racing goes. In the last race I holes hotted it and in the first couple of laps was up there with Shaun; I felt really comfortable and maybe I just got a bit tight, but I felt a lot better. I fell back to fourth, but it was a lot better racing and I was only fifteen seconds off the lead compared to the previous race. So at least we went in the right direction, and it’s the same as the last round where as the day got on I got faster, so I just need to work a little bit more and get into race mode instead of still wanting to practice. — Graeme Irwin, MX1 #5