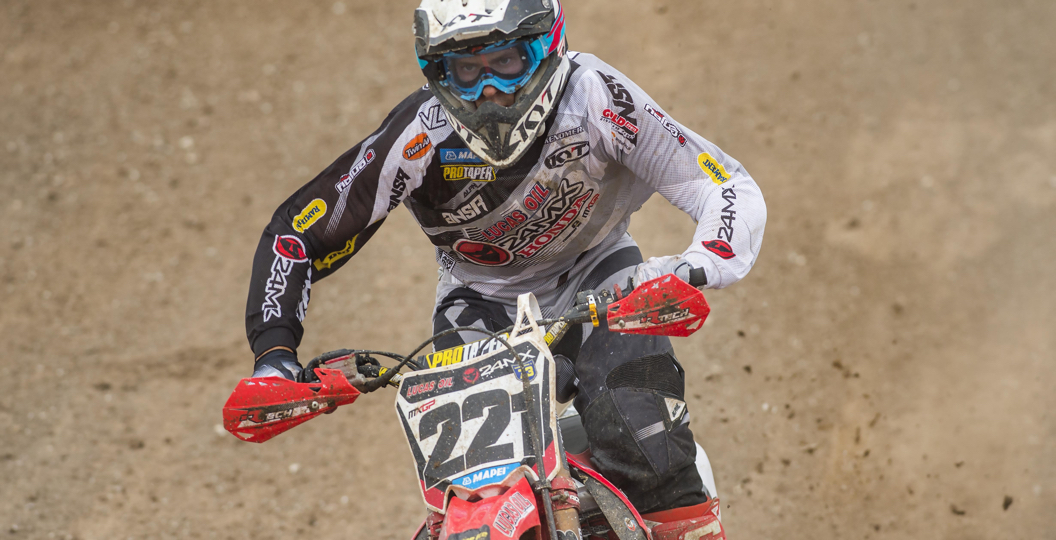 Monday, June 20, 2016 — Anticipation is greater than realization a wise man once said. And as far as anticipation goes the British MXGP in Matterley Basin was a big one. 24MX Lucas Oil Honda’s Priit Rätsep achieved a career milestone this weekend with solid 18-20 moto scores. Former EMX125 British GP winner Damon Graulus had to withdrew from racing after sustaining a thumb injury.

Both of 24MX Lucas Oil Honda’s replacement riders started their British Grand Prix weekend in fine fashion. Fresh from his Dutch Masters of MX podium and a strong MXGP debut in France, Graulus was keen to continue the momentum. He rode to seventeenth in free practice, Priit placed twenty-first. The fast and flowing Matterley course is especially rewarding for those who can get a great getaway.

While Rätsep managed a good rhythm in his qualifying race he was simply too far back in the start to make significant headway. The multiple Estonian champion thus finished twenty-seventh. Graulus’ faith was more dramatic though. The twenty-one-year-old Belgian got tagged on the rear wheel and hit the deck surprisingly hard. Suffering a painful thumb and blurred vision the incident prematurely ended Damon’s race weekend.

After a mid-pack start in moto one, Rätsep  managed to pass several riders in a gutsy downhill braking manoeuvre. Priit climbed up to sixteenth before losing a couple of spots. Competing in only his third ever MXGP event he delivered a creditable performance under pressure. With a freight train of fast and experienced riders behind him, Rätsep only succumbed to Clément Desalle; he kept Shaun Simpson and Tanel Leok at bay to claim eighteenth.

Even more impressive was Rätsep’s second moto. This time he produced an excellent start. Priit guided his Honda CRF450R to thirteenth in the opening lap while he would run as high as eleventh. Again a pack of world class riders was mounting a challenge, but the #221 24MX Lucas Oil Honda kept his cool under pressure. Even when supercross legend Chad Reed started to push, Rätsep didn’t crack. Only during the later stages of the thirty minute plus two lap race, it had started to drizzle by then, Priit started to lose terrain. Eventually he crossed the line in twentieth, bringing his points tally to four for the day.

Next weekend the 24MX Lucas Oil Honda will participate in round twelve of the FIM Motocross World Championship in Mantova, Italy.

Priit Ratsep: “Finally I scored my first MXGP points! Matterley was definitely a step in the right direction. With better starts I was also riding better and enjoying myself. It was a track where you needed to push, but equally you needed to stay cautious because it’s a punishing place when you get it wrong. Overall I made good progress compared to the Spanish and French GPs. It’s actually a lot like we anticipated that I needed the race rhythm to build up the speed. Particularly at the start of the second moto my riding was pretty good. Let’s see where my season goes from here.”

Damon Graulus: “I was really looking forward to this weekend, because Matterley is one of my favourite tracks. I was hit in the start of the qualifying race and since I didn’t see this coming I went down unexpectedly. I was feeling a bit disorientated and dizzy, because of the impact. When I fell I also hurt my thumb. The first examination showed that I sustained a small tear in the ligament, but I will no the full extent of the injury tomorrow.”