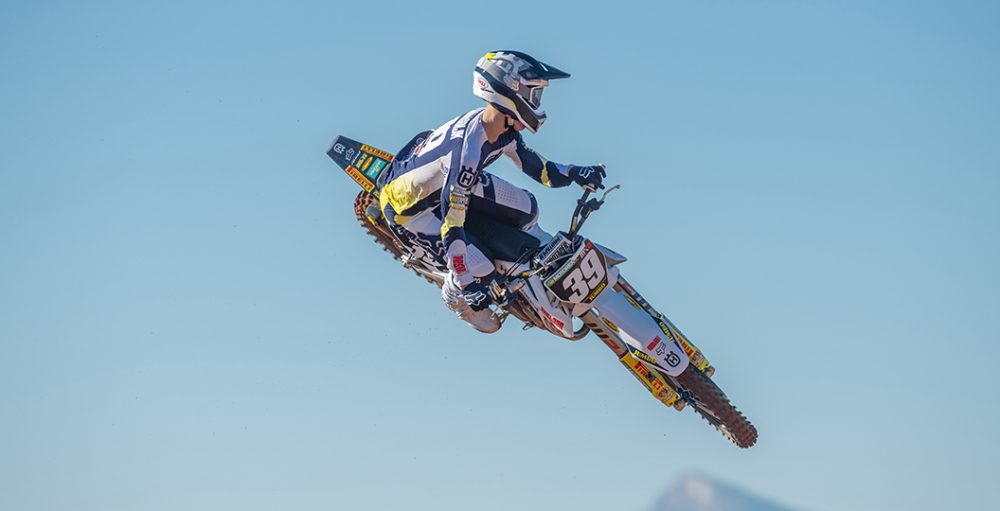 Since returning from injury at Lommel back in July, Roan van de Moosdijk’s progressed steadily in his search to get back to a level resembling his best.

Enduring a hugely challenging 2022 MX2 campaign, which was scuppered by a series of injuries suffered due to his devastating crash at round three in Argentina, it’s been great to see him back in the saddle after a long road to recovery.

Needing to not only have shoulder surgery but also breaking his collarbone and fracturing his wrist, this was quite the setback for the Nestaan Husqvarna Factory Racing starlet, who was eager to impress in his debut campaign with the team.

Making his long awaited comeback at the familiar confines of Lommel at the MXGP of Flanders, many positives could be extracted from his weekend. Leading laps, quickly finding his groove and adapting to the blistering pace in the sweltering conditions to ultimately go 6-5 for fifth overall, he was justifiably content with his efforts.

Having gotten some vital bike time under his belt, he then immediately switched his focus to Sweden, where he topped the time sheets in free practice and in warm up. Unfortunately, the opening moto didn’t go entirely to plan, as the tip from his rear brake snapped off, leaving him to battle through without this key component. To his credit, though, he dealt with this adversity admirably by navigating around the issue to finish 10th.

With the bike fixed and keen to translate his earlier speed into the second moto, things went far better for him in the final race of the day. Duking it out with the heavy hitters in the class in the early exchanges and enjoying an especially lively duel with Jago Geerts, the 21-year-old produced an accomplished ride to claim fourth.

Up next for the #39 was Finland, where he instantly felt at home in the rough, sandy conditions. Indeed, this was aptly illustrated by the fact he was in the top three in all the four sessions prior to the race except warm up, with his second in the qualifying heat particularly catching the eye.

Performing brilliantly in the opening race alongside teammate Kay de Wolf, van de Moosdijk stayed within the top five for the entire moto, as he clicked off his laps in a calculated, measured fashion to secure fourth.

He then carried his momentum into the second moto, where he clearly had the speed to win the race, as he handled the treacherous, deep circuit with aplomb. Bagging the fastest lap time of anyone by nearly a second and the only man to put down a 1:51, it was a joy to watch him thriving out front. But just when he appeared destined for victory, disaster struck late when he crashed before eventually remounting to come home in third.

“I had a good gate pick today. My start was not too bad in the first moto and I made some good passes early on. I struggled in the middle of the moto, because I need to get used to the intensity,” he explained after his overwhelmingly positive day that earned him fourth overall.

“Where do I even begin with the second moto? I took the lead and just did my own thing. I led for more than half the moto, but hit an edge in a corner and crashed. I am angry with myself. This is a big improvement though.”

Venturing to France for the penultimate round of the series and hoping to build on his exceptional work from Finland, while his early spill in moto one hindered his chances, with him forced to come through the pack to 13th, he constructed another excellent ride in moto two to capture fourth.

Hitting his stride in the rugged, rock filled terrain at St Jean d’Angely, how he remained composed and stuck to his task even though the likes of Tom Vialle, Thibault Benistant, Geerts, Liam Everts and Kevin Horgmo posted quicker times underlined his maturity.

Heading to Turkiye hoping to close out the season with a bang, van de Moosdijk did precisely that by putting in a showing that was littered with upside. Consolidating on his handy recent form by riding with speed, clarity and precision to claim third overall, there was no better way to sign off on what’s been a challenging 2022.

Entering race day knowing he had what it takes to mix it at the pointy end of the field, the first moto saw him start in seventh before strategically pushing his way up to fourth. He then eclipsed his first moto efforts in the second stanza, for he got off the line smoothly to give himself an ideal platform to piece together a polished moto.

In a race where he was one of only five men to post a lap time in the 1:52s or under, finishing in third to secure his place on the podium was the perfect way to rubber stamp his turbulent year. “It was very good in the end. I worked my way up to fourth in the first moto with some really good lap times,” gleamed the Dutchman.

“I was happy with that and knew it was possible to get on the podium. I knew I could get a trophy here, so I’m really happy. It was emotional! My shoulder injury was the biggest injury I’ve had, so finishing the season like this is great.”

His team manager, Rasmus Jorgensen, was equally delighted for van de Moosdijk when speaking to Lewis Phillips in his Fly Racing post-race podcast from Turkiye. “It’s been pretty impressive with Roan how he’s come back from that big of an injury and how fast he was back to top three. Obviously the intensity was missing in the beginning, which is normal. But to finish with a podium, I’m so proud of him,” he insightfully insisted.

“Roan has the full package. We really, really do believe in him. Seeing him ride this weekend, he’s very good on the bike. Very efficient. It doesn’t even look like he’s pushing like hell and then you see the lap times. He’s riding super good and feels really comfortable on the bike.”

Having notched eight top five moto finishes from the final five GPs of the year he attended, much encouragement could be drawn from his terrific results, as he reminded the world just what a special athlete he is.

Competent on all surfaces and unquestionably one of the fastest men in MX2 when fully fit and firing on all cylinders, if he can remain healthy there’s every chance he can fulfil his immense potential to emerge as a title contender in 2023.

But with him only featuring in 16 GPs in the last two terms due to injury, making every gatedrop will be imperative if he’s to harbour any intentions of becoming champion in what will be his final year in MX2.