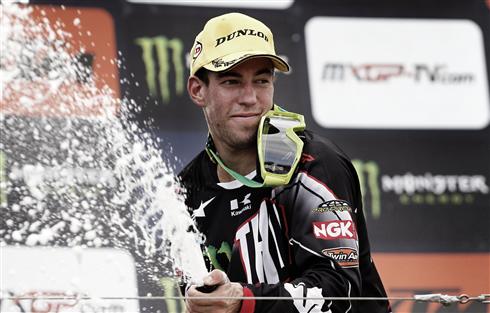 Frossard back with KRT Kawasaki

Following the recent announcement of Ryan Villopoto’s retirement, the Monster Energy Kawasaki Racing Team has reached an agreement with Steven Frossard to complete the season alongside Tyla Rattray.

Fifth last year aboard the factory Kawasaki, Steven knows the Monster Energy Kawasaki Racing Team well and will just need a few hours of training to become acquainted with the 2015 KX 450F-SR. Having won the Open class of the Motocross of Nations at the same track last year, he returns to Kegums with high expectations for this GP and also for the final six GPs of the World Championship. The team will line up two riders again, and wishes to thank all of its partners for their support throughout the season so far.

Steven Frossard: “Of course I’m happy to complete this season with KRT, and to be back in a team where I know everyone and have so many great memories from last season. For sure the first goal this weekend will be to get used to the factory Kawasaki again; the 2015 bike has new development evolutions, new suspension, and Kegums could be the best place to discover it as last year we ended the season there by winning the MX of Nations with the French team. A top five result would be great for this first race, then we’ll have a few more weeks to practice before Loket.”

Steve Guttridge (Kawasaki Motors Europe Racing Manager): “It’s good to welcome Steven back under our KRT awning ! We know what he’s capable of on our Factory KX450F-SR and I’m sure he’s going to prove it to us all very soon.”

Thierry Chizat Suzzoni (team owner): “We are pleased to see Steven back with us for the rest of the season, including the last two overseas GPs. We reached an agreement with the support of Kawasaki, and he will replace Ryan Villopoto for these races. We know Steven very well of course, so it will be easy for him to find himself within a few days; he has a ‘big heart’ and we know that he will give his best.”