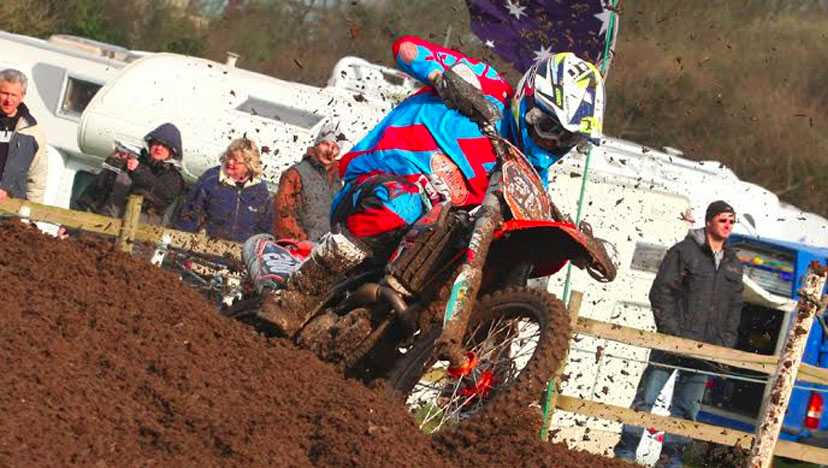 Last Sunday the Phoenix Tools Premier Motocross Championships made its way down to Cornwall to Fraddon Moto Parc for round 2 in the series. The weather was kind to us on the day, but the track was to really rut up after tons of woodchip had been added recently and things were to become very difficult for all classes.

In the Phoenix Tools Expert Open class it was Championship leader and defending Champion Luke Hawkins on the Phoenix Tools Rocket Honda who had set the fastest time in qualifying and looked to be the one to beat as he had the best start in the opening race from team mate Alex Snow, but they were soon joined at the front by wildcard James Dunn on the H M Plant KTM who was pressing hard. Dunn managed to get pass Snow on lap 2, but he had a lot of ground to make up to catch Hawkins who was well gone. Snow made a slight mistake on lap 3 which let the Crescent Racing KTM of Jake Shipton and the Oakleaf Kawasaki of Shane Carless both through, but Snow was soon back in to his rhythm and closed right up again and got back up in to 3rd and was soon closing in on Dunn who in tall had gradually reeled in Hawkins at the front. As they went in to lap 6 Snow and Dunn were having a real tussle and were to actually touch which ended in Snow going down which was to damage his radiator. Dunn really had his throttle wound back from there and closed right up on Hawkins and was to take the lead 3 laps from the end when Hawkins made a mistake on a lefthander and from there Dunn went on to take the win with Hawkins 2nd and Snow with a steaming bike taking 3rd. In the second moto this time it was Carless who led in to the first corner from Snow, but as they went in to the next corner they were to collide and both went down a long with many others. Will Worden on the 250 Gibbs Performance 2-stroke KTM was to head the pack on the opening lap, but all the time was being pressured by Dunn who was right there in his wheel marks and on lap 2 was to get pass Worden to take the lead and with a clear track in front of him was to ease away. Hawkins was to move in to 2nd and was giving chase, but all eyes were on Snow who had been 26th at the end of the opening lap who was absolutely flying up through the field and by the end of lap 5 had got the better of Worden to move in to 3rd, but the margin to make up on Hawkins was to much and he had to settle for 3rd behind Hawkins and Dunn who notched up his second win of the day. In the last race it was Hawkins who was to lead from the off from Shipton and Snow, but there again were a few fallers and in the thick of it was Dunn who was to rejoin well back with it all to do. Hawkins was giving his all at the front to get away from Shipton, but the latter was to stick with him for several laps until on lap 3 Shipton went through and from that point was to ease away from Hawkins. Snow was still there in 3rd and gradually closed in and passed Hawkins two laps later. Shipton was flying and was to go on to take the win from Snow, but this was not so as both Shipton and Snow were to get penalised one minute for course cutting which gifted the win to Hawkins with Dunn who had clawed his way up through the field taking 2nd with Shipton and Snow dropping back to 3rd and 4th.

In the Over 35 Championship class there were a few having difficulty with the conditions, but that wasn’t so for current Championship leader Nick Life on the Gibbs Performance/St Blazey Yamaha who was feeling at home in the tricky conditions like he puts up with at enduros and Nick was to totally dominate all three races winning them by well over a minute from his nearest rival. In the Over 40’s class the Championship was to have a new leader at the end of the day and that was to be the TwoNineTwo Factory Touch Honda of Chris Brown who showed his class with a hat trick of wins beating former Championship leader Jon Rutherford on the J R Racing KTM in all 3 races. In the Over 50’s class it was that rider again Mark Gleadhill who was to keep his 100% record a float with yet another hat trick of wins.

In the Tyremarks Junior Championship class there was great drama at the qualifying stages as Championship leader Luke Sturgeon who had won all 3 races at the opening round didn’t qualify for the main Championship races so there would be a new name leading the Championship at the end of the day and that was to be Jack Stevens even though he only won one of the three races, but being consistant was the name of the game. Wildcard Joe Clayton was to win the other two races with a fine display of riding, but was denied a hat trick of wins by a mistake on the opening lap of race 2 where he had to claw his way back from 31st but not a bad effort as he took 2nd passing Olly Jones on the final lap.

Report and Photos by Dave Rich