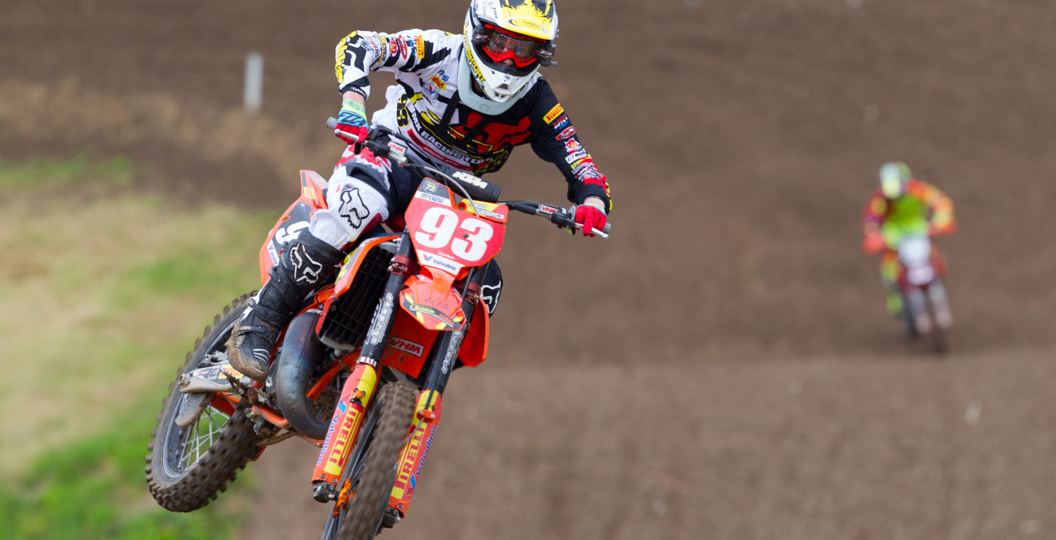 What can only be described as a hectic schedule of EMX races is well underway at Matterley Basin; there are four of the support classes tackling the scenic venue. Keeping track of those classes can be difficult, as coverage is limited, so here is a quick look at what has gone on throughout the weekend.

The results from the timed EMX300 session were fairly surprising and certainly bode well for the patriotic fans that have lined the fences here. Lewis Gregory, who did not actually race in Spain, topped the times by a considerable margin; a second and three tenths to be exact. Brad Anderson chased him in second, but will be searching for a way to close the gap on his teammate in sectors one and three. Those parts of the track are where Gregory is superior. Yentel Martens and Mike Kras occupied spots in the top five, but you just know they will come alive when the gates drop.

Parity is not a word you would use to describe the EMX150 action this year, as Emil Weckman is superior and topped the times yet again today. He was a second clear of James Scott, who has actually managed to break free of the rest of the pack, and another four and a half seconds ahead of third! That went to Hakon Fredriksen. Just how spread out is this class? The top ten are separated by nine and a half seconds.

The EMX125 times varied quite a lot from one session to the next, as track conditions deteriorated. Kevin Horgmo topped the first timed session with a 1:58.897, which was just sixteen hundredths faster than Luca Milec. It was that close! Gianluca Facchetti and Jago Geerts, some names that are more recognisable, completed the top four in this one. Brian Strubhart Moreau was the fastest in the second session, with a 2:00.870, and just two tenths quicker than Stephen Rubini. I get the impression that Rubini will continue to cut into Geerts’ lead this weekend, so that is an intriguing point to watch.

Thomas Kjer Olsen topped the weaker first EMX250 timed session with relative ease, as he was almost nine tenths quicker than Bas Vaessen. Josh Gilbert was another second further back in third, which was a little surprising and perhaps speaks for how uneven the two sessions were. But, then again, Darian Sanayei was just as dominant in the second group, as he too topped the times over Steven Clarke and James Cottrell by eight tenths. Jorge Prado Garcia qualified fourth in this group, not that it really matters. You know that he’ll pull a holeshot from almost anywhere.

The first EMX300 moto was all about Brad Anderson, as he took the early lead and sprinted away from the rest of the field. Although the lap chart shows that he was never really challenged, Lewis Gregory actually got really close at the end and may have even made a pass had there been another lap. The gap was two seconds as they crossed the finish. Mike Kras and Yentel Martens were a quiet third and fourth; there truthfully wasn’t much going on behind the top two. Matt Moffat was just under a minute down in fifth.

Emil Weckman was not really challenged in the first of two EMX150 motos, unsurprisingly, as he took the early lead and romped to a forty-four second victory. The top three riders (Luis Outeiro and Yago Martinez completed the moto podium) actually finished in the same spots that they ended lap one in, which should give you an idea of what the on-track action was like. Hakon Fredriksen was arguably the most exciting rider to follow, as he ended lap one thirteenth and crossed the line in fourth with the second fastest lap of the race! It remains to be seen if he can at least challenge Weckman for a brief period with a good start.

Jago Geerts controlled the first EMX125 moto on Saturday evening, but never really had enough of an advantage to get too comfortable. Geerts got a good start, which is something that he has struggled with recently, and put in some good laps early on, which ended up making the difference. His closest rival, Stephen Rubini, started on the cusp of the top five and got into second after just a few laps, but eventually ended up two and a half seconds down. Those two were in a class of their own, quite simply, as Roan Van De Moosdijk was another thirty-four seconds down in third!

Jorge Prado took yet another holeshot in the opening EMX250 moto and attempted to sprint away in the opening laps, but was just a little off the pace and couldn’t fight off the advances of Darian Sanayei. Sanayei took the lead on lap four and never looked back, as he won by more than five and a half seconds. That was his third consecutive moto win. Prado held second until there were just two laps remaining, but was passed by both Steven Clarke and Thomas Kjer Olsen in the closing stages.

Mike Kras really managed to turn things around from one day to the next, as he took a clear victory in the second EMX300 moto this morning. Kras led every single lap and eventually ended up with a nine second advantage, but it was not quite good enough for first overall. Brad Anderson claimed that, after working his way forward from the lower half of the top ten to second in moto two. Lewis Gregory rounded out the top three in the moto and overall classification.

The second EMX150 followed a similar pattern to the first, except for the fact that James Scott led for a brief period in this one. He soon gave way to Emil Weckman though, so the latter officially led every lap of the moto. Scott held on for second, but was twenty-eight seconds adrift, whilst Hakon Fredriksen started third and finished there, quite simply. Fredriksen did manage to take second overall though, thanks to a consistent scorecard, with Yago Martinez on the lowest step.

Multiple riders took turns in the lead in the second and final EMX125 encounter, which made it one of the more exciting races of the day. Pierre Goupillon led early, but could only fight off the advances of Kevin Horgmo for two laps. Horgmo then led for a majority of the race, but had the victory snatched from his hands with three laps to go by Stephen Rubini. Rubini would go on to win the race, the overall and also gain ground in the series standings. Jago Geerts had an awful start and slowly worked his way through the field; he eventually took third with two laps to go.

Jorge Prado didn’t actually take the holeshot in this one, but he was right there. Darian Sanayei managed to just pinch him off to take the early lead, but lost it to Steven Clarke just a lap later. Clarke led every lap from that point on, but Sanayei was right there the whole time; two seconds separated them at the end of the moto. Thomas Kjer Olsen took third after taking out Bas Vaessen. What about Prado? He was seen rolling towards the end, but salvaged a thirteenth.