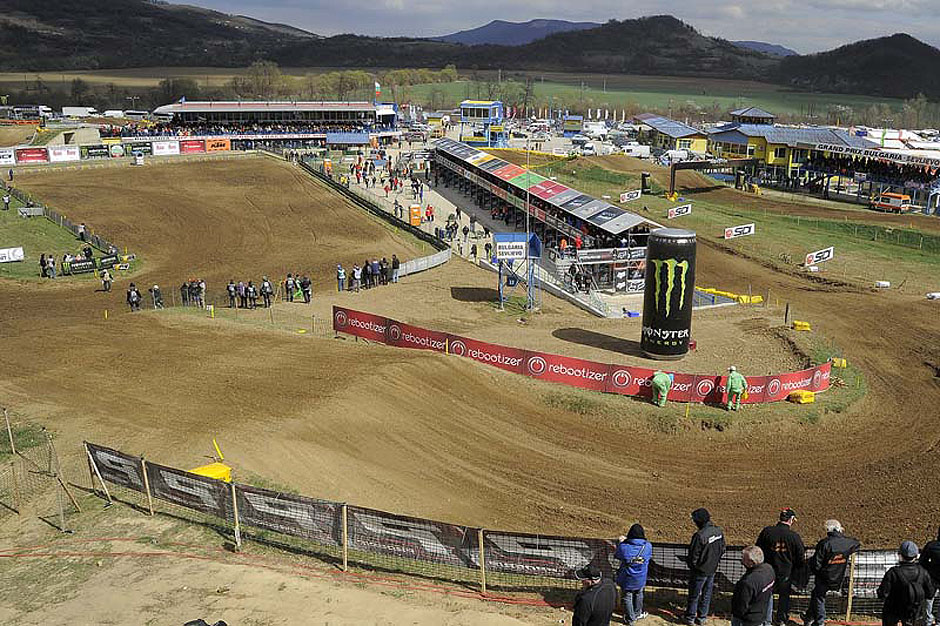 Don’t forget to cheer on our boys in Bulgaria!

As for every GP the lovely Marionna from Youthstream sends us the low down for the weekend. So here it is. We’ve got nothing to add to it really other than if you’re going, well have a great time, although you’re probably already there and having fun. So much so, you shouldn’t be messing about on the internet, you should be living life and enjoying the local culture. Oh and of course we should also give it the usual rally cry…. C’MON YOU BRITS, LETS BE HAVING YA!!!

After a week-break, the FIM Motocross World Championship is back to celebrate the second round of the season in the awarded track of Sevlievo, Bulgaria, where Antonio Cairoli and Jeffrey Herlings will give their best to keep the red plate on their KTM. Besides, the Gorna Rositza track will also host the first round of the UEM EMX125 championship.
In the first Grand Prix of the season, held in the sandy track of Valkenswaard, there was a clear favourite in the MX1 class, the multi-champion Antonio Cairoli. However, this weekend the races might be more disputed, as there are at least up to six riders who can fight for the win in Sevlievo.

In the MX2 class things are very similar, as Jeffrey Herlings did not have any opponent in Valkenswaard, so it is time now for the Dutch rider to defend the red plate on the hard pack of Sevlievo. However, there is another clear favourite to claim the victory this weekend, the British rider Tommy Searle.

The EMX125 Championship starts this weekend in Sevlievo and everything is open to see who starts dominating the series. However, there are already some names which stand out from the 51 entered riders; 2011 EMX125 runner up Tim Gajser, former FIM 85cc Junior World Champion Henry Jacobi or the promising Spanish talent Jorge Zaragoza.

MX1
In 2011 the FIM Motocross World Championship started in Sevlievo, Bulgaria, and the five times World Champion Cairoli had one of his worst starts of the season, finishing ninth overall and with an injury on his knee. This upcoming weekend, the Red Bull KTM Factory Racing rider will arrive at the Gorna Rositza track with the red plate on his bike and his goal will be to be on the podium and to keep the leadership of the championship.

Rockstar Energy Suzuki World’s Desalle is second in the MX1 standings, six points behind Cairoli, but he is facing the Bulgarian GP full of great expectations to do well and close up the gap with the Italian. Desalle went 2-1 last year in Sevlievo and he was on the first step of the podium, so he has some extra motivation to claim the overall victory this weekend.

Third in the MX1 point standings is Monster Energy Yamaha’s Frossard. The French rider made his debut in the MX1 class last year in Sevlievo and he already won the qualifying race and finished second overall. Frossard has admitted that he feels comfortable in the Bulgarian track, but he needs to avoid making the mistakes he made in Valkenswaard to be on the top of the rostrum.

Another French rider is in the fourth position of the MX1 championship, Gautier Paulin. In Valkenswaard, the Kawasaki Racing Team rider did two solid motos, even after being involved in a tangle at the start of the second race. Gautier is also another contender to be on the podium this weekend, as feels really good on hard pack and last year finished fourth overall in the MX2 class in Sevlievo.

HM Plant KTM UK’s Strijbos impressed many people in the paddock after obtaining an overall fifth position in Valkenswaard, so this weekend it is time to prove his riding skills on the hard pack and try to keep or even improve his fifth position in the point standings.

De Dycker, who is currently sixth in the championship, will race in Bulgaria to keep his position in the standings but also to forget his last year’s 19th overall result in Sevlievo. Gonçalves is behind the Belgian in the point standings and he has a good opportunity this weekend to improve his position, as he has always felt really well riding in the Bulgarian track.

Simpson is eighth in the Championship, followed by Leok and Philippaerts. Christophe Pourcel was sick in Valkenswaard and he is currently 14th in the standings, so this weekend needs to do well to cut the difference with the top three riders. On the other hand, Bobryshev suffered a heavy crash in Valkenswaard two weeks ago, and although nothing was broken, he has still some pain in different parts of his body, especially in one of his thumbs. This weekend he will have to test his fitness and try to improve his 17th place in the championship.

MX2
The first Grand Prix of the season was an easy weekend for Red Bull KTM Factory Racing’s Herlings, as he was riding home on his favourite track soil, but this weekend he will have to measure his skills with the rest of the MX2 riders on the hard pack. Herlings has admitted that he has been training a lot on hard pack and that he determined to claim the second victory of the season this weekend in Sevlievo.

However, Tommy Searle is very fast on hard soil and he already proved it last year in several occasions; in fact, the British rider ended second overall in Sevlievo, ahead the current leader of the series, Herlings. The Team Floride Monster Energy Kawasaki Pro Circuit rider confessed in Valkenswaard that this year he feels ready to be more on the top of the podium to fight for the Title, so this weekend can be a good opportunity for Searle to cut some points from the Dutch.

The third position in the standings is for Team Floride Monster Energy Kawasaki Pro Circuit’s Roelants, who might be one of the surprises of the season if he keeps on being on the rostrum in the upcoming Grand Prix. Last year it was not an easy weekend for Roelants in Sevlievo, so he will have to prove that his riding skills on the hard pack have also improved to be fighting for the MX2 title.

Red Bull KTM Factory Racing’s Van Horebeek started the season really well and he is now fourth in the point standings. The Belgian finished sixth overall last year in Sevlievo, so he might be able to fight for the top positions and keep on being close to the red plate holder.

His teammate Jordi Tixier made his debut in the MX2 class last year in Sevlievo and he finished 16th overall, so this year, being in the Red Bull KTM Factory Racing team and having finished fifth overall in Valkenswaard, he might be able to finish close to the podium this weekend. Tixier, who was the 2010 UEM EMX125 Champion, finished 13th in his rookie year in the MX2 class last year, but this 2012 may be the year where he proves his real potential.

Nicholls is currently sixth in the MX2 standings, followed by Anstie and Ferrandis. Teillet is ninth and Pocock, who will ride for Monster Energy Yamaha in Sevlievo and also in Fermo, is completing the top ten.

Michael Leib will be back in the FIM Motocross World Championship riding for Monster Energy Yamaha at the Bulgarian and Italian Grand Prix.

On the other hand, Christophe Charlier will not be able to take part in the Bulgarian GP as it had been foreseen, because his bone in his foot needs some more time to be healed.