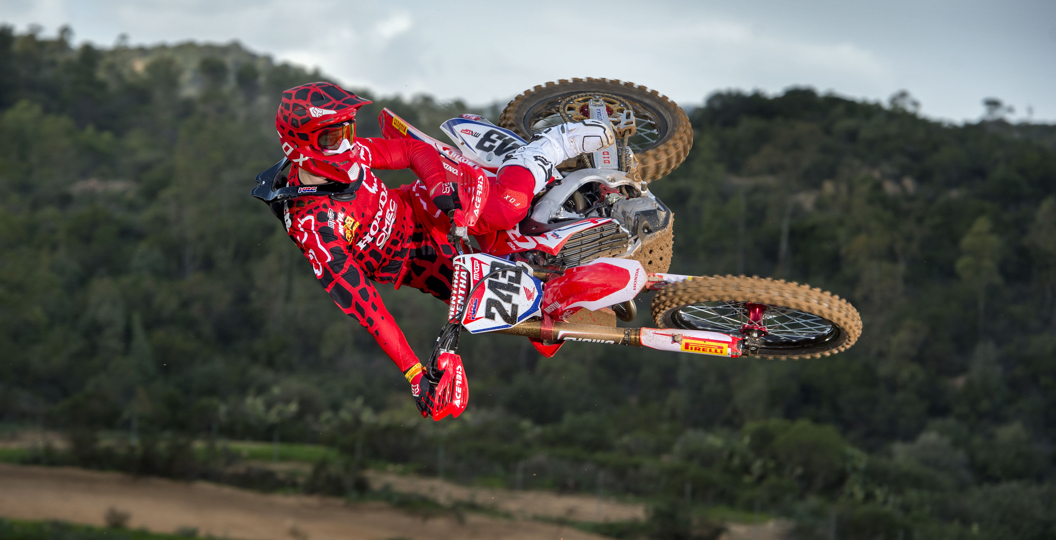 A tedious five months is about to appear in the rear-view mirror, as the 2017 FIM Motocross World Championship is just days away. The prospect of what lies ahead has fans on the edge of their seats, as four legitimate contenders will take to the Qatari starting line on Saturday. Anything less than a race win will be disappointing for the four guys listed in this regular ‘Dissected’ feature, but who is best equipped to stand atop the podium?

It is only right that one starts with the current champion, Tim Gajser, when attempting to establish a hierarchy in the premier class ahead of the first FIM Motocross World Championship round. Much like Romain Febvre the year before, Gajser rose to prominence in his rookie season and dominated proceedings. Will he, again like Febvre, falter under the weight of expectation in his sophomore season and relinquish his grip on the number-one plate?

Although Gajser had the red plate on lockdown from round eleven on, mistakes were prevalent through the latter part of the season and may be cause for concern. There were three Grand Prix rounds in succession, rounds fourteen to sixteen, that were turbulent for the Slovenian, who floundered in four of those six motos. That is just a small sample size, of course, but you must question what would occur when pressure is applied in the points. It is worth considering that consistency was a strength of his across the entire season though.

Speaking of his strengths, raw speed is undoubtedly his greatest advantage. Just look back on the various times that he recorded in practice last year for proof of that! Gajser was the fastest rider in time practice at eight of the seventeen rounds that were run and sat on some impressive margins. Jeffrey Herlings may be able to match that, now that he has entered the premier class, but that is certainly an area where the reigning champion excels.

Experience will only aid Gajser and his charge also; he has a pair of title-winning seasons in his back pocket now. Those campaigns occurred in completely different circumstances also, so he has dealt with most situations, but he has not yet entered a season as the heavy favourite to lift the crown. It will be most intriguing to see how he handles that pressure and attention later this week.

The lackluster performances that Antonio Cairoli recorded last year were puzzling and, as a result, onlookers began to push him to one side. Throw all of that out of the window though, as there appears to be life in the old dog yet. Cairoli stormed to a pair of titles in the Italian series that was run over the last month and won five of the six motos.

Although it is wise to not put too much stock into what goes on at those international events, Cairoli won with such conviction that it is simply impossible to ignore. The field that he handled with relative ease featured some of the biggest stars, like Romain Febvre and Tim Gajser, so it is certainly something that is worth taking into account as we enter the Qatari fixture. Perhaps the niggling injuries and ongoing bike issues were really to blame for all of the problems that he encountered last year?

Even if his competition really were mailing it in, which is again hard to believe, the confidence that he gained will make him dangerous this year. If we are now talking about the same Cairoli who won eight titles, then it is almost impossible to name a weakness. There is one element of his results from last year that concerns me, however, and that is the fact that he needed a good start to contend for a win or even be a factor.

If you look at all of the races that he won or did well in last year, he started near the front or at least near his main competition. In the races that he struggled in, like the Grand Prix of Spain, he just started where he finished or around there. Is this a situation that is similar to Chad Reed in the USA, where the raw speed is no longer great enough for him to rip through the field with ease? Perhaps, although that could have all changed again now! The rider with the most impressive résumé is arguably the biggest question mark.

Romain Febvre appeared to be the superior talent through the first half of the 2016 FIM Motocross World Championship, but then things started to unravel quite quickly and various injuries put a halt to his charge. Everything started to come around again at the Motocross of Nations and Monster Energy SMX Cup though. It seemed that all was well at that point, especially seeing as he spent a lot of time perfecting his setup for this year during the latter part of last season, but there has been another crash since then.

A hard hit at the first Italian fixture last month left him with a concussion and some pain in his neck. Although he was back on track a week later and there were no lingering issues, the fact that he is starting to earn a reputation as one of the guys who either crashes or wins is most intriguing. Unearthing that potential to conquer each week is clearly not an issue though; he dominated on a hard-pack circuit in Thailand a year ago and then rode incredible at the next round in the sand of The Netherlands.

If he can implement that consistency that he first found in his title-winning season then he could just win a second title and, at this point, one could argue that he is an underdog to do that. Febvre had an average-starting position of eighth across the races that he completed last year, so that is obviously a weakness. An influx of poor starts in the second part of the season brought that average down, but that was an area that he was trying to improve without sacrificing performance on other parts of the track. His starts in the Italian Motocross Championship were good, just not great, so that is something to look out for.

Oh boy, how do you even begin to predict what Jeffrey Herlings will do? All speculation is irrelevant if he cannot stay healthy and, although he has never raced a 450F in the FIM Motocross World Championship, it seems that is almost impossible. Herlings sustained a minor wrist injury at the beginning of this year, but it kept him off the bike for a short period and was really no big deal. The crash that he had at the final Italian round just last weekend was massive, however, and will hinder his results through rounds one and two.

It has been confirmed that Herlings will indeed make it to Qatar, but he has stated that getting a good result will be a tall order. Could that be a blessing in disguise? All expectations and pressure will be alleviated and, as a result, fans will shift their focus onto the other three riders mentioned in this ‘Dissected’ feature. Herlings will then be able to go about his business, which may stop him from making another catastrophic mistake.

There are so many ways to view the situation that Jeffrey Herlings finds himself in. Some argue that he crashed so much in MX2 for three reasons; his mind wandered whilst alone out front, he was so much better than the competition that he felt invincible and the win was all that mattered. All of those factors will be eliminated now and finishing fifth will be acceptable, so perhaps he’ll back it down and take note of that? It is easier said than done.

The way that he has performed at the Motocross of Nations proves that he has the speed and ability on all surfaces, not that confirmation of that was needed. If he can just keep it on two wheels he’ll be a formidable contender and could be the third rookie in as many years to claim the MXGP title.