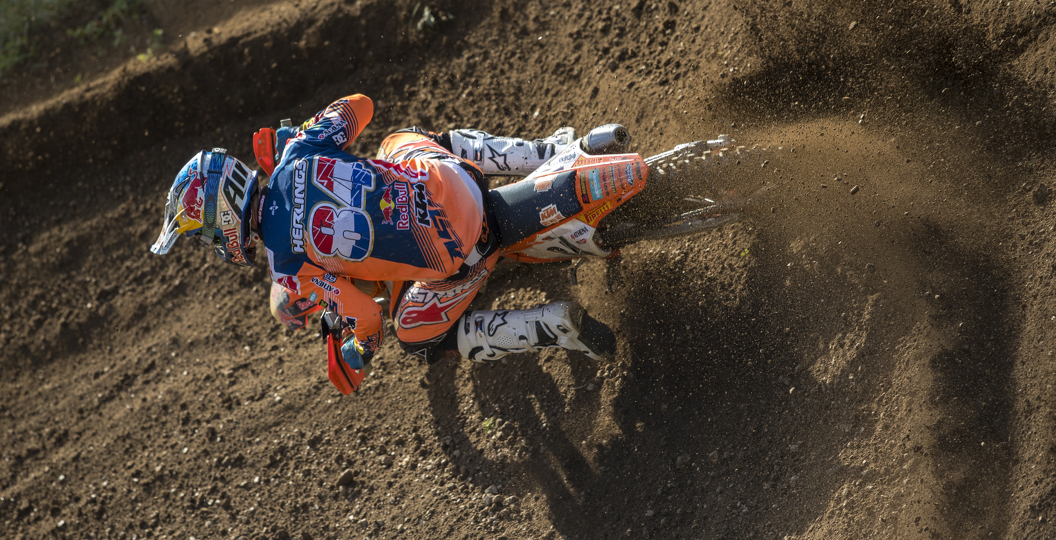 Loket is not exactly a highlight on the FIM Motocross World Championship calendar, but it may go down as underrated. The Czech event, which has been a part of the series for as long as most can remember, often hosts memorable moments that shape the future of MXGP.

The thirteenth round of the current campaign will be remembered for all the wrong reasons, however, as an unfortunate incident that claimed the life of Igor Cuharciuc cast a black cloud over the event. The jump that the crash occurred on is often labelled as problematic. Pauls Jonass had a horrific crash on that very obstacle twelve months ago, of course, and it also caused Josh Coppins to lose out on a maiden world title. Could a change be on the way? One would argue that there has to be, simply as a sign of respect, but action will undoubtedly occur in some form.

There is simply no reason to doubt that Antonio Cairoli will claim the title, his seventh in the premier division, so the focus has now turned to each specific event, rather than the championship standings. The Czech Grand Prix was set to be one of the most exhilarating stops on the second half of the schedule, as it was presumed that ‘222’ would find it most difficult to acquire a trophy and thus the door would be open. That was not the case, however, as he stormed to a brilliant victory and made his rivals look rather average.

There were so many opportunities for others to capitalise and steal a win, as well as some points to aid them in their respective battles. Tim Gajser did find a hint of consistency to compliment his blistering speed in the first of two motos, but succumbed to pressure from his rival when conditions deteriorated in moto two. Clement Desalle was poised to claim a third victory and make himself one of the most successful racers at Loket in recent memory, to his credit, but again came up short when it really mattered. What does this mean as we head onto Cairoli’s preferred surface? Prepare for him to establish a lead that’ll ensure that his ninth title is celebrated at the final flyaway of the current term.

Although his results left a little to be desired, Jeffrey Herlings continues to boast speed that has most frothing at the mouth at the prospect of what is on the horizon. “Awake from now” was the instruction that his mechanic dropped on his pit board early on in that second moto, which sums up his showing in the Czech Republic and at prior events perfectly. Herlings is lacking intensity in the early laps, which was actually something he strived to achieve earlier on in the season, but manages to turn it on in the dying moments. That would work perfectly, but he just needs to uncover that speed a little sooner than he has been.

Just before the halfway point in the season, which seems like an eternity ago now, Herlings commented that he was attempting to emulate the strategy that has led Eli Tomac to so many victories in the USA. That involves pacing yourself at the beginning of a moto and then pouncing towards the end, when the track is at its roughest and competitors begin to fade. That has worked wonders in the past, and even helped Herlings on a few occasions, but opting for a strategy that relies on Antonio Cairoli fading towards the end may not be advisable. Imagine if he finds a way to ride to his full potential for the duration of a moto?

Starts continue to be a huge source of debate for Jeffrey Herlings and those in his corner, so perhaps the intensity in the opening laps will come with being near the front? The lap charts show that he started ninth and sixth respectively in the two motos, but the image below shows that he was actually further back than that. The good news is that the brutal sand in Lommel, the next stop on the FIM Motocross World Championship calendar, will ensure that it is much easier for him to move forward after a poor start.

Romain Febvre can sympathise with that problem somewhat, but there is cause for concern beneath the Monster Energy Yamaha Factory Racing awning. Febvre, who has stated on numerous occasions that he would be able to contend with a better start, was poised to breakthrough in the second MXGP encounter. Fourth was the position that he occupied at the conclusion of lap one. Seeing as he dominated at this venue twenty-four months ago, one would think that he would be able to hold onto that position. That was not the case, however, as he succumbed to the advances of Herlings and Gautier Paulin.

Both Herlings and Paulin are incredibly talented and consequently losing positions to them is certainly not something to be ashamed of, but this was a perfect scenario for Romain Febvre. Expecting Febvre to contend for a win could now be considered ludicrous, but there is one solution that may catapult him to a position of power again. The 2018 YZ450F will be beneath him by the end of the season and, although the machine did not drastically alter Arnaud Tonus’ starts this past weekend, there is reason to believe that it will at least aid ‘461’. Even a slight change will undoubtedly reinvigorate him at this point.

Signing that three-year contract with Monster Energy Yamaha Factory Racing at St. Jean d’Angely last year, which took place just two weeks before a crash that ultimately led to his downfall, is proving to be an extremely wise decision. Whilst his ride may not be in danger until the end of 2019, there is pressure to perform and acquire a position on Team France for the Motocross of Nations. The latest rumours indicate that the team is going to be Marvin Musquin (MXGP), Benoit Paturel (MX2) and Gautier Paulin (Open). It would certainly be peculiar for the winner of three of the last four motos at the event to be healthy, but not selected.

Max Nagl, another underperformer, is in a much more precarious position than most in the premier division, as his future in the sport is undetermined. Nagl has not yet unlocked the potential that once made him a title contender, as starts are restricting him. That is a common theme here, huh? Perhaps that metal mesh is playing havoc with certain riders more than they are letting on? Nagl has explained exclusively that he had to turn his set-up upside down in order to ensure that he would be competitive out of the gate, but that has not yet had the desired effect. The third that he acquired in the qualifying heat was a sign of promise, one may argue, but then he only had the eleventh-fastest time.

The advantage that Pauls Jonass currently holds over his rival, Jeremy Seewer, seems fairly minuscule when you put it up against the lead that his MXGP counterpart is sat on. One could argue that Jonass is just as comfortable though, because he is simply faultless. It remains to be seen what would have to happen to keep him outside of the top five. It would be interesting to see him fall in turn one and then push forward from the back, but it is most unlikely that will happen. It is hard to even imagine either Jonass or Jorge Prado starting outside of the top ten!

Jeremy Seewer has been interviewed on MX Vice countless times this year and, when hit with tough questions about the title chase, he remains upbeat. Go back and look at him up on the Czech podium though, because the frustration has shone through for the first time. A handful of insiders within the paddock are now starting to state that ‘91’ is only in such a hole because of a mechanical failure that occurred in Latvia. That theory is not exactly fair to Jonass though, because he too did not score points in a moto in the Indonesian mud. The amount of bad luck that has been distributed between the pair is fairly even.

Things are only going to get worse for Jeremy Seewer too, one would presume, as Pauls Jonass will be the heavy favourite at circuits like Lommel and Assen. If those events play out as expected, the title may be clinched at the latter. That would arguably be the best-case scenario for ‘41’, as his loyal legion of fans would not find it as difficult to make the trip over from Latvia. On that topic, whatever happened to the group of Latvian fans that followed Matiss Karro everywhere? What a way to sign off!

Thanks for reading. Now to get started on a ‘Stat Sheet’ that is sure to be stacked! There is never a dull day at MX Vice. Speaking of that, if there is something that you would like to see then hit me up on [email protected]. We’re always looking to cater to your needs!