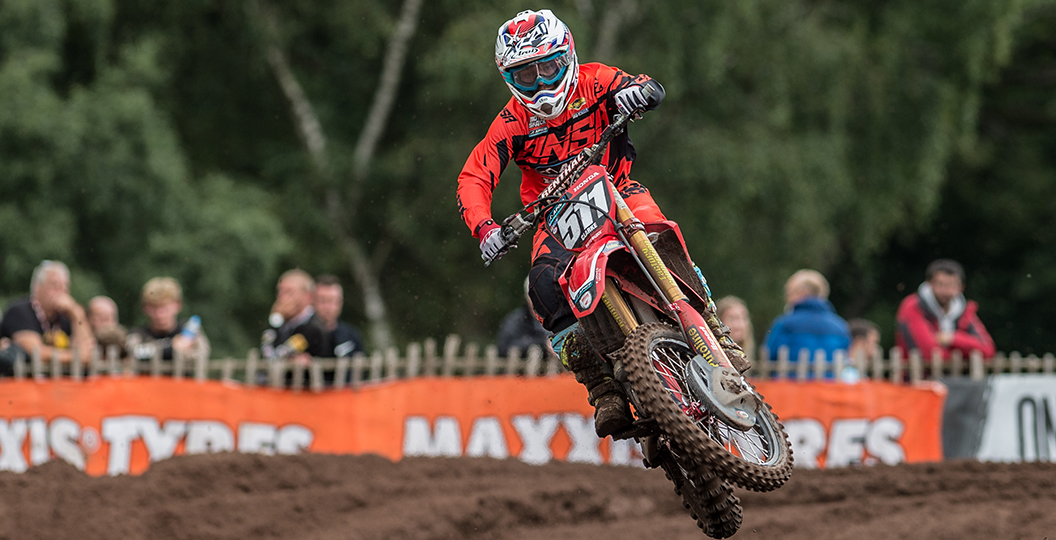 Steven Clarke has had a turbulent season, both on and off the track, as there have been extreme highs and then crushing blows. Now that the Carglass Honda squad have shut up shop, Clarke has formed an Apico Honda outfit and will finish the year surrounded by some familiar faces. All of that is discussed in this exclusive MX Vice interview, which was originally posted as a podcast.

MX Vice: Busy couple of weeks for you and now you are back in Britain. I am sure you would have liked to win the second moto, obviously, but this was a solid start to your new programme.

Steven Clarke: Yeah, it was good. First moto was okay. I had an average start but I got up pretty quick into the top five, then on the last lap I made a small mistake and got passed by Liam Knight. In the second moto I had a holeshot and led for a while, which was nice. I sort of rode my own race. It was good. I set quite a good pace and I felt pretty solid. Then two or three laps from the end Pocock got me and Liam Knight. They were both riding really well. Not to make excuses, but I have been pretty ill.

I have been in all week with a chest infection, so I was not quite up to par at the end of the race, but hats off to them guys. They were behind me and they finished in front of me. It was good. It has been a lot of trying to get everything sorted out. I have had my Carglass Honda team fold and I had to sort of step up and make my own team again. Dylan from Apico and those guys, and Sally from Putoline, have really pulled their hand out of their pocket and sorted me out. It is not easy to get sponsors this late in a season, so it was good that I got them on board. I hope my results today have done them proud.

Going back to that whole Carglass situation, how did it unfold? I think the news that you were moving back to Apico came out before they said they were shutting up, so obviously you moved on knowing that was kind of coming?

Yeah, it was a bit of a bad situation really. The team manager quit after round two of the EMX and that just sort of then left the team spiralling downhill sort of thing. Peter Stiphout is the name of the team owner and he is a great guy. He paid me on time every month. He made his way to the races, despite not even having a truck or a team manager, and he was even at Lommel and cheering me on, even though I had different graphics on. It just kind of shows you what kind of guy he is.

After the team manager quit it just sort of spiralled out of control and caused itself to fold up. I have had a bit of help through that from Honda Europe to continue on for the rest of the season and do it on my own, so I am happy with that. It is good. It is nice to have a sponsor behind you like Honda, who is capable of being able to do something like that and even willing to do so. We’ll be good.

It was even a bit messy at the start of the year, wasn’t it, with parts and things like that? It was not a complete programme?

No, they struggled. There was some nagging things from last year, some bills and some parts were missing from last year’s go at the team. It just sort of caught up this year. There were bills that needed paying. I do not want to get too deep into it and say some things I should not say, but it was not ideal. It was not bad though, if you know what I mean. They were not bad to me. They were not mean to me. They did not hold anything away from me. They still provided me everything that they could. It was not everything that I needed, but it was everything they could provide me with. No hard feelings there.

You are back in Europe and kind of doing what you used to do. Are you happy with where you are at? You have done a full season of it again now. Are you content and wanting to move forward with this or are you just thinking that you need to get back to America?

I am thinking I need to go back to America, mate. I feel really good in my career at the moment with my riding, my fitness, my training programme and everything. It all seems to be flowing really well. So I thought, while I am feeling this good and while my bike still feels as good as it does, I need to get back over there today, because I am dying to get on the podium. I know I am capable of it. I just need to be there to do it.

Do you know what you are doing next year then? Do you have anything set in stone? I guess you are moving forward and trying to get to America?

Honestly I have not even got any talks with anybody at the moment. I have only just finished sorting out this year’s deals. I want to make it through the end of this without any other focusses on my brain. I have got a lot of points to make up if I want any chance of winning that EMX championship or even being on the podium; it is full steam ahead for Foxhill, Lyng, Bulgaria, Switzerland and Assen now.

I know in the past you have kind of been a bit pissed that you have not had proper support in America. Would you go back and do the whole privateer thing again or, if you go back, would it have to be with the right bike and the right team, so you could just give it a proper go?

Honestly, I will go on a privateer bike. I reckon I could beat them on that privateer KTM. I was so fit and ready for it last year. My engine went out in practice and I broke my collarbone nine days before the first round, which was such a kick in the nuts. I was fit, healthy, ready for a podium and to get knocked down like that was hard. I found it quite difficult to sort of put my head back on straight after that. It took me up until I started racing again in the outdoors to even start getting results, get my fitness back and get my bike flow back. I will go back there on a TM if I need to. I am trying to think of a bad bike. There are none anymore. They are all good bikes.