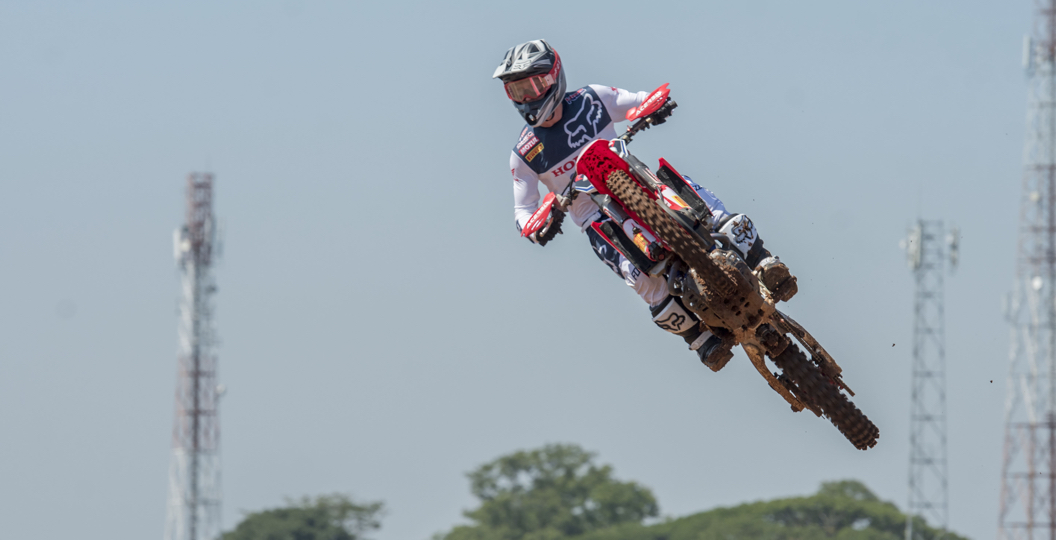 Calvin Vlaanderen has had an incredible couple of weeks, with his maiden Grand Prix victory and another very strong ride at the thirteenth round at Semarang. It has not all been good, however, as there has been some controversy with the federation in South Africa, just as he explains in this exclusive MX Vice interview from the Asian Grand Prix.

MX Vice: Third overall, which compared to last week obviously does not seem as good, but I thought you rode amazing. You came back better than the Husqvarna guys in the first race and then passed Thomas Covington right at the end of the second race. I thought it was really, really good.

Calvin Vlaanderen: Yeah, it was really good. Last weekend was a win and this weekend was third overall, like you said, but it also felt like a win with my riding today. I think if I got two holeshots I also could have been up front and could have maybe won, but that is how it is. First moto I had a good start and was third behind Pauls [Jonass] and Jorge [Prado], but I went down and was dead last. Had to fight my way back through the pack and finished fifth, which I was stoked about.

To be honest, I find there is no one in MX2 anymore. I think there were ten riders here and the rest were the Indonesian guys. It was quite easy to come back through the pack. I still came back pretty well and finished fifth, which I was happy about. The second moto I got off to a good start and had a good battle with Covington for quite a few laps. I tried to stick behind Jorge the first two laps and he was on another mission. He was quite fast and I could not hold his pace.

Then I had a good battle with TC and got stuck behind him a little bit. Kind of found a rhythm behind him and got some good lines, then tried to save a little bit of energy. I knew it was going to be a long race. The last few laps I kind of took a deep breath, went for the pass and made it stick I think with one lap to go. I was really happy with that. I knew with that pass I would have been on the podium. It was really good. I am happy to walk away here with third overall. Last weekend was a win and now I am really happy to go home.

Honestly I think the rest has helped me a lot. I had a good rest this week. I have been training really hard. I have had a really bad sickness this season after Valkenswaard, which put me back health-wise. I am over that now. Everything is just clicking. I am working well with my trainer. We are doing our thing in the week and it is showing on the weekends.

I am clearly not asking the right questions whenever I interview you, because this is the first I have heard of the illness. When did you actually get better? Even when you were on the podium in Germany and Britain, were you still feeling it then?

I would say it was over by then, but I still was not one hundred percent myself. I think with those podiums it gave me more confidence and that has helped these podiums come a lot easier than those ones. That sickness put me back quite a few weeks with training. I could not train. Some days I would just lay in bed the whole day. It was just a bad virus.

I have heard from a few MX2 guys that before your second moto the track was watered like really bad on the faces of jumps and all that. Did you think it was sketchy or over the line?

To be honest, it was quite sketchy the whole weekend with them putting water on it. I found they actually did a pretty good job with the cards that they were dealt. It was quite a hard-pack track and they could not just not put water on the whole weekend. It would be dry and dusty, so they tried to put a little bit of water on here and there. I thought it was obviously slippery the first few laps, but during the moto it got better.

Not really. I was stuck behind [Brent] Van Doninck for I think ten minutes. I could not get past him. I tried everything. At one stage I just said, “I just have to be aggressive and push my way past,” and that is what I did. I found I think two places on the track where I could pass and I used those for the other guys in front, but I was a little bit lucky with some guys going down. [Thomas Kjer] Olsen went down, Covington went down and Jago [Geerts] made a mistake. He let me through. [Adam] Sterry went down, who I passed, so I was a little bit lucky with the guys going down, but all in all I was still happy with the fifth in the first moto.

You are Dutch again this week, so I guess you are just changing that every week depending on how you feel?

There is actually a big story about that. This week MSA, which is Motorsport South Africa, they complained to Youthstream because I have not asked them for permission to ride with the South African flag. I think it is ridiculous. I am really pissed off about it. That is why I just said, “You know what? Screw that. I am going with the Dutch flag from now on.”

MSA have never helped me in my career, never once. Now I am really proud to represent South Africa and to put them on the top step of the podium and also on the podiums before that. When I hear that they complained, because I did not ask them for permission to ride with the flag, that is just ridiculous. I am really pissed off about it. I am obviously still a South African and I am proud to be South African, but I am also half Dutch and now I am also proud to be half Dutch.

How does that work then? Why would you even have to ask permission? If you are South African, you get that. You do not have to ask anyone. They do not control the flag. It just sounds a bit fucked up.

It is a bit fucked up. Sorry for my language, but it is fucked up. I have a Dutch passport and I ride with a Dutch license and the Dutch Federation helped me with that. They paid for my world championship license. I chose to ride with the South African flag and, because I am riding with a Dutch license, I think they complained because I am not on a South African license or some shit like that. So, anyway, I am going to post something about it this week on social media, because I am quite pissed off and I hope all my South African fans will understand me and my decision to go with the Dutch flag.

Can you ride for Holland at the ‘Nations then? Are you enough Dutch to do that or how does that work? Are they going to let you ride for South Africa?

There is also a lot of talk with what is going on with the ‘Nations and things like that. It is cool. I am excited. We will see what happens. I cannot really say what I am going to do yet. Obviously not going to ride for South Africa. I probably could ride for Holland. We have a good team with Jeffrey [Herlings] and Glenn [Coldenhoff]. We could go for the win actually. We will see what happens. I think the Dutch federation will let me ride if I want to.

I am just not happy with some Dutch fans. They do not really understand. They do not really accept me riding for Holland, because I am not truly Dutch. It hurts sometimes to see all the posts and some people talking shit about me, because I am not truly Dutch and riding with the Dutch flag. But we will see what happens. I think I just need to do what I want to do and that is it.

I guess if you win the ‘Nations no one will complain then. That is how it works, right? You get a good result and everyone is happy?

That is true, but that also comes with more pressure to do well at the ‘Nations. But we will see what happens. I am not really sure if I will ride or not. We will see.

Finally, I meant to ask you this last week. You obviously won your first GP. It was great, amazing, best day of your life and whatever. Is it a bit weird winning it overseas? If you were in Europe you would have had your family there, your girlfriend and all of that. Is it kind of like a weird experience?

Yeah, that is so true. I would have loved to win my first GP in Europe rather than here in Indonesia. It is still a win and I still want to get another win going back to Europe now. I think if I get another win in Europe it will feel like the first win again. Of course my girlfriend would have been there and she is not here, because she has to work, and my family and all that. Also the European fans and all your own fans and things like that are around, whereas here in Indonesia there is not really many people. You just do not really know anyone except for the team. But a win is a win and I will take it.