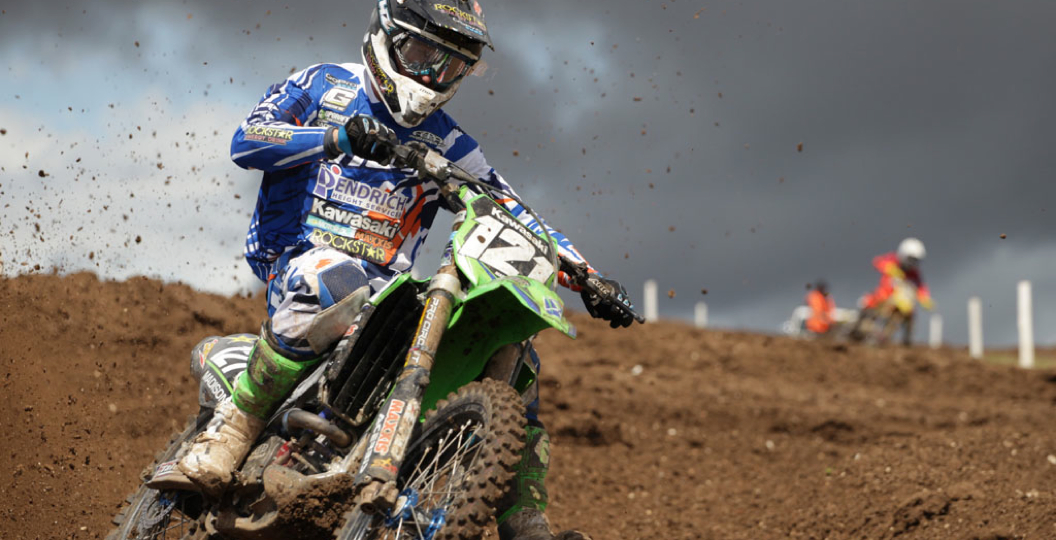 Back when Maxxis British Motocross Championship promoter ACU Events announced that Drumclog (Scotland) was off the menu, and the unknown track of Cusses Gorse was its replacement, there was a lot of turning the air blue in the Pendrich Height Services Kawasaki workshop, not because of the choice of track, but rather that it meant having to make a trek from nearly one end of the island to the other. That severe weather in the form of the remnants of Hurricane Bertha was forecast filled the team with doom too, and with that, the trek down south for the penultimate round began.

Sunday morning dawned to a track that had held up beautifully to the onslaught of wave after wave of pounding rain overnight. MX2 pilot extraordinaire Bryan Mackenzie went out and qualified fifth, improving on that in the super-pole. MX1 colleague Ross Rutherford put in a time that placed him twenty-sixth.

For Bryan, this is where the good fun stopped. Off to a great start in the first race, while holding down third place trouble in the KX250f’s gearbox locked him out of all but third gear, putting him at a distinct disadvantage, and leaving him in eighth at the chequered flag. A manic scramble between races ensued, one that saw Bryan roll into the parc fermé with his backup bike instead. The second race was solid enough, but it forced Bryan to be more conservative with his racing, ending the moto in fifth. The final race was another manic scramble as the gearbox woes continued to haunt mechanic BC on the way to the waiting zone and again Bryan was forced to pull out the backup machine, however still managing to pull another top five out of his helmet, finishing fourth, and fifth overall on the day.

Ross didn’t escape the day unscathed either, although the day had started for him in a decent fashion too. A top fifteen start developed into a solid ride in fourteenth before arm pump started to set in and he had to back off the pace. A small mistake late in the game left him in nineteenth at the finish. The second race got off to a mid-pack start, but much to Ross’ dismay, entry into the rhythm section went wrong and he found himself in the dirt with the bike bent out of shape. Without a bike to ride, Ross had to push it back to the pits. After some Deano love and attention, the bike was ready for race three, but Ross himself had also taken a hard hit and after the first lap in agony realised that it was a lost battle and called it a day. The end result was a disappointing twenty-fifth place.

Ross; Today wasn’t brilliant, I’ve had better. Qualifying was terrible, I never qualify well so we just went with it. In the first moto I got a bad start but I rode really good, I think I got myself up to fourteenth, and I kinda struggled a bit with arm pump, I dropped it and loads just passed me and I ended nineteenth. In the second race it was the same story, I didn’t get a great start and actually rode pretty well again, then I hit a kicker in the fast whoops and went arse over tit and wrecked the bike and myself a little bit. That was that race over. The last race I tried to go out again but I was just too sore and so I called that a day. Hopefully we’ll finish the next round on a good run.

Bry: It’s been a complete drama-filled day for us. It actually doesn’t look that bad on paper, fifth overall and 8-5-4, but believe me, in the awning it’s been flat-out all day. In that first race, I got a decent start and was in third, and in the third lap the gearbox broke and ended up jammed in third gear. So I rode the rest of the race in third gear, but for a couple of laps I had to take it easy to make sure it was fine and that it wasn’t going to lock up over a jump or something. I lost a lot of places and ended eighth, which is still decent considering the circumstances. Between races, BC and Deano worked super-hard to try and save the day to get me back on that bike and we thought he had it done, but just before we went to the waiting zone, something else happened with it and I ended up on my spare bike. I made the best of a bad situation there, and in the last race the same again, we thought we had the race bike going, and as BC was riding it down to the waiting zone, the gearbox let go again, so it was a mad rush to get the spare bike again which incidentally I prepped in-between races myself just incase I had to ride it as the boys were flat-out busy. But to salvage fifth overall was a pretty decent day and hats off to the boys, we all worked worked for it today!