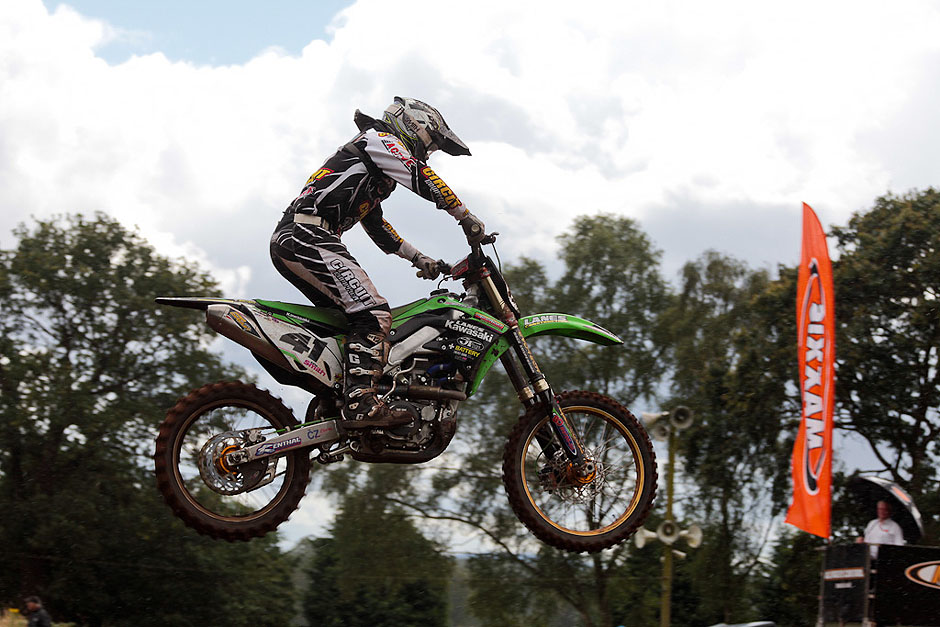 Close by no top 10 cigar for Lanes Kawasaki

A week after debuting on the Lanes Kawasaki KX450F in Scotland, Alfie Smith returned to Hawkstone Park to join Sunny Thompson as a replacement for Dutch rider Marc de Reuver at the sixth round of the Maxxis British Motocross Championship this past weekend. The team was also joined by veteran rider Greg Hanson on the day.

Qualifying on Sunday morning did not quite go as planned for the team as Smith qualified in seventeenth in the MX1, with Thompson qualifying somewhat further down in twenty-eighth in the MX2 class. Hanson proved that he was still the best of the vets by qualifying in pole, a full two second faster than anyone else.

Thompson’s outing on the day was unfortunately very short-lived. After a start just outside the top twenty, Thompson was looking to enter the points but a hard crash half-way in left the young rider in pain and unable to continue, returning to the paddock and sitting out the second race.

Smith proved himself over and over. In the first race, the youngster got off to a good start, putting him just outside the top ten on the first lap. A solid race whilst fending off any challengers gave Smith a twelfth on the finish line. In the second race, a somewhat more difficult start still gave Smith plenty of opportunity to get aggressive with rivals ahead of him, taking twelfth place after one lap, and progressively moving in on tenth place with the two-lap board out and securing the position for the team. With a top ten place in the bag, Smith then proceeded to the super-final, in which he got off worse than others with a start in the mid-twenties. Fighting his corner against not only his own class, but the elite of the MX2 class as well, he found himself going to ground after some race contact with another rider. Hurting all over, Smith called it a day, opting to keep the first two race points only, and ending in eleventh overall on the day.

Hanson found himself in some illustrious company on the start. Leading into the first corners and hotly chased by the likes of Terry House and Dave Thomson, the reigning champion had to see his lead fade into the distance, ending the race in fourth. In the second race, Hanson had to fight his way forward from a start in seventh, bagging third place two laps later. It was not to last as rival Gary Hoptrough forced him to relinquish fourth to end the day in fourth overall.

“Today started off well! In qualifying, Alfie qualified well, Sunny not so much, but then again we know Sunny’s better during the race,” commented team principal Dean Lane: “Coming into the first race, Alfie got an average start and worked through like a trooper, the boy never gives up and fights right through to the end and in the races we were blessed with a good tenth overall. I think that’s the best he’s done in the British all year, and then he went out into the joint super-final at the end of the day. He was running fairly well but he clipped someone going into one of the bomb holes and ended up crashing out and injuring himself again and hurting more than he was last weekend at Duns.

“Sunny tweaked his leg in the first race, and he was unable to carry on for the rest of the day. Greg Hanson rode for us this weekend, he qualified first and rode smooth for a fourth in race one. I never got to watch their second race or where he finished overall. He needs to win at Little Silver and Phil Mercer to have a problem now to clinch the title.”

Alfie Smith (#51): Qualifying wasn’t so great, but in the first race I got a twelfth which was ok, and in the second race I was strong towards the end and got tenth and I was happy with that race. In the last race I crashed out again, which was not so good. My neck is aching again, and my back and my chest. Overall I’m happy with today, I don’t really like the track so it’s probably the best I’ve ever ridden here.