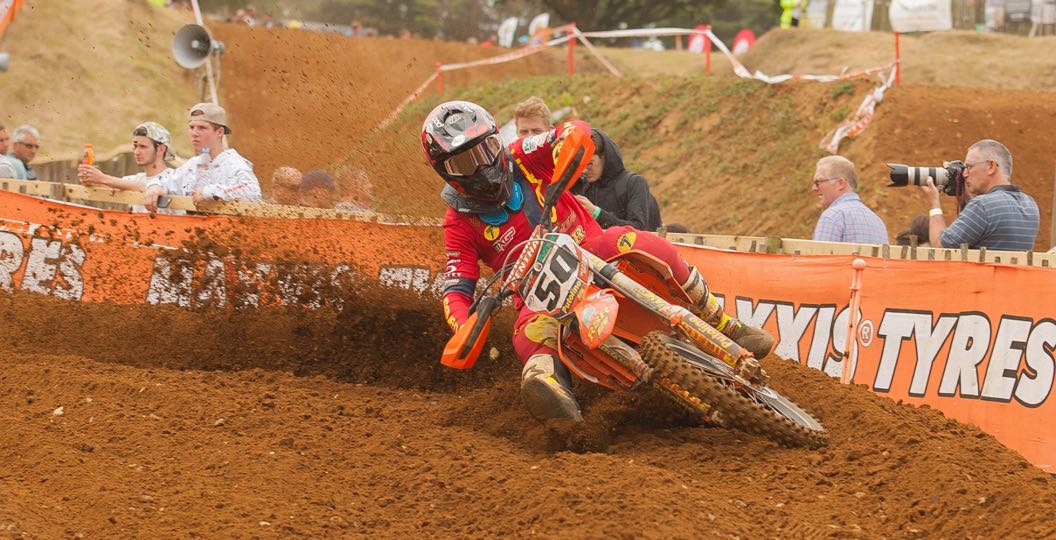 Securing a deal early on during silly season is undoubtedly a blessing, as it alleviates a lot of stress and worry. That is, of course, unless things don’t turn out as expected. Martin Barr found himself in that situation last month, when an opportunity to run his own team again fell through. The likeable Irishman was, consequently, left scrambling for a new home and was fortunate enough to land on his feet with the established Buildbase Honda squad. With his new deal out in the open, we caught up with Martin to get his take on everything that has happened over the last few months.

MX Vice: Some pretty big, and surprising, news dropped yesterday, so fill us in on how the new deal came about…

Martin Barr: I’m really excited to join one of the biggest and most professional teams in the paddock. I can’t wait to get started! I was offered the deal in the summer, but back then I basically had everything sorted for 2016. A few weeks ago it all fell through though, so we got to work and put a bit of a deal together. I’m really excited. I’m back on the 250F again, which is something that I enjoy. I’m lucky enough to be one of the riders that can jump on either the MX1 bike or MX2 – it doesn’t really bother me. I have a lot of work to do, with it being a bit last minute. It’s nothing we can’t get on with though and, by the time the first race comes, we’ll be well and truly ready.

What happened between the time you were offered the deal originally and now then?

It was out of my hands. Unfortunately something happened within KTM and I got a phone call saying there was nothing for me, even though we had everything agreed. That’s business and that’s all behind me now. It’s all about concentrating on the future with Buildbase Honda, getting our bikes ready and making sure we’re fighting for championships for next year.

I guess you regret not taking the deal in August, but it was one of those things where you never could have known what would happen?

Yeah, definitely. Obviously I built up a relationship with KTM – I’ve been with them since 2013. I had all my product sponsors on board and was set to run my own team again. It’s easy saying that now but, in hindsight, I thought I was safe and everything was done and dusted. Looking back I wish I would have took it, but that’s life sometimes; you just have to deal with it and move on. I just want to thank Dave and Neil Tuxworth for giving me the opportunity, as a lot of people would have just said that they had already offered me a deal and it’s gone now. They both have faith in me to put the new Honda 250F up on the podium each weekend.

You touched on your own team there, but what did you have to go through exactly to get your bike out on track each weekend?

It’s not easy. I was doing everything myself, bar ordering parts. I was the one doing the graphics, the plastics and things like that. I was trying to get sponsors on board too, on top of all the travelling – I think I did forty-eight tor forty-nine boat crossings this year. I was doing all the driving, as well as trying to organise the team and practicing in the week. It was a struggle, but I was just happy to get on with it. When we got to the races I thought it was all pretty well turned out.

My good friend and sponsor, Nick, from Manchester was always with me, and my Dad was always one hundred percent behind me. It wasn’t just me, there was a group of us, and I thoroughly enjoyed it. My plan for the future is to have BRT back out there, when my racing days are over. I want to have a full-blown team and help develop younger riders – there isn’t anything like that over here in Northern Ireland. For now, 2016, my main goal is this MX2 championship with Buildbase Honda though.

Considering all of that, I guess you’re pretty stoked with you’re results this year? Seventh in the championship, but it could have been so much more…

Yeah, definitely; I felt I should have had third in the championship, but I unfortunately didn’t finish five races. It was just because of mechanical issues that were out of our hands, and I did my scaphoid after a crash at Canada Heights. I’ve always known that I can still do it, but it was just a case of putting it all together. It was nice running my own team and still fighting for podium positions each weekend.

Is it going to be a case of, after doing everything yourself, you’re going to appreciate everything a lot more next year?

No, not really. I’ve been with teams before and been doing my own thing since 2013, with help from a couple of KTM dealers. I was back as an official KTM UK team this year though. I respect all the work – I think a lot of riders out there don’t appreciate how much goes into getting everything ready. Us riders have a lot to do ourselves, obviously, but a team manager has to make sure the products are there, as well as looking after the financial side. It’s definitely not easy. I respect everything, especially the mechanics. I don’t think they get enough praise for what they actually do.

From where I’m sitting, it seems that raw bursts of speed are one of your strengths. Do you think that will make this transition to MX2 easier?

Yeah, I think so. It won’t be too bad on me either, because I was riding a 350F this year in the MX1 class and you have to kind of ride it like a 250. It’s not as if I could just rely on the power of a 450, where you can just point and squirt. On the 350 I had to be precise, make sure I was in the right gear and hitting the right lines. That’s definitely going to help me get back on the 250 – it won’t be too much of a change for me. I definitely believe the Honda 250F can do the job too.

In an ideal world, would you have liked to continue in MX1 or are you excited about making a change?

With my own team everything was in place for me to stay in MX1 – I was training for that. It doesn’t really bother me, as I’m one of those riders who can jump on anything, but I just had to change my training programme slightly. I’m happy to go back to MX2. There are a couple of old dogs in there; I’m sure I’ll be battling with Neville Bradshaw and Bryan Mackenzie at some point next season.

Speaking of training, the Buildbase Honda team are working with Alan Milway now. Does that programme tempt you or will you be sticking to your own routine?

No, I’ll just be sticking to my own programme. I have support over here and my personal trainer, so things have been going really well. It’s basically on my doorstep, so we have a really good relationship. I’m quite happy with where I am at the moment with my current shape and physical form.