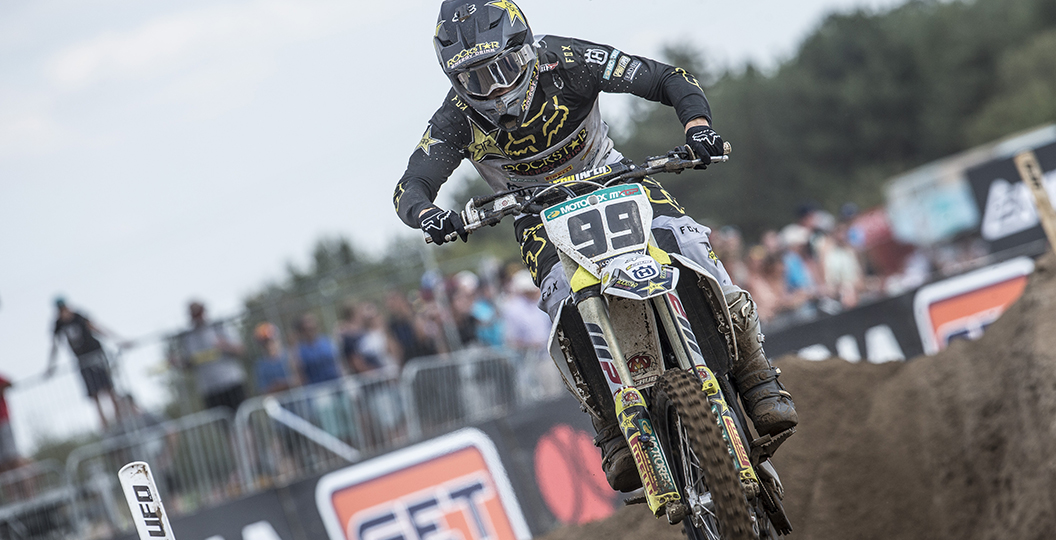 Max Anstie climbed back onto the premier-class podium at the Grand Prix of Belgium, Lommel, following a brace of fourths on Sunday. It was a strong ride and one that he recapped in an exclusive MX Vice interview on Sunday evening. Additionally, his plans for next year were discussed along with the Motocross of Nations.

MX Vice: Back on the podium, third overall. I feel like if there is a way to get third overall, then that is it. It was a strong way to do it.

Max Anstie: Yeah, it was a tough day, man, with the heat. Obviously it was the same for everyone, but we expected it to be tough and it was. Second race I got into third and I passed Glenn [Coldenhoff] and got a bit of a gap. I could see Romain, because he has been riding really well all weekend. I could see that maybe he had used quite a lot of energy in the first race. I kind of had quite a good gap on him. I was like, “Okay, no problem” and then I crashed! Then I was battling with Glenn and I knew Romain was close behind. I could not get around Glenn again.

I was eating loads of sand, but eventually I saw that Romain was maybe getting tired and he backed it off a bit. Glenn was riding… Definitely after I crashed he was pushing. He wanted to get that third in that moto. Fair play, he rode well, but it was nice to get on the box. It is nice to be up there, but it is tough. It is not easy to get on the box. Definitely a nice way to end off the weekend.

I saw a comment on your Instagram this week that got me thinking. Someone commented something like, “Third overall this weekend. It is yours!” I read it and just thought, “Why not second or first?” It seems like people automatically give that to KTM guys. Do you even find people coming up to you, acting like that and you kind of have to remind them that they are beatable? People have done it and people will continue to do it.

Yeah, I just kind of stay on my own and do my own thing. Actually, I was quite pleased with this weekend. Normally this weekend feels a little bit like a home GP in a way, because you do have loads of British fans and it is really busy. But actually this weekend I felt like it was pretty smooth, quiet and not that bad. That was good. I just focus on my own job. You can only do the best that you can, but the KTM boys are very good. It is hard to be on the podium. I said it in the press conference that last week or a few weeks ago in Czech Republic, I battled up front. You could have a great race and be third, then you could have a not-so-good start but have a great race and finish tenth.

It does not look good on paper, but you have actually rode just as hard or had a great ride battling with some great people. From third to tenth, the guys are very close and very strong. The two KTM’s, yeah they are beatable and you can say they are beatable, but at the moment they are bloody good. It is not that you are giving it to them, but they are so consistent. I know how hard it is to be on the podium. Today was hard. Any other time you ever get on the podium it is so bloody hard and yet they are very consistent. They have got something figured out and they have got that little bit. I feel like the gap was not actually that big today, surprisingly.

I actually felt like even Antonio [Cairoli]… I know he crashed but I crashed as well. I think Jeffrey [Herlings] may have crashed. The speed and the lap time difference was not that much. I know Jeffrey put a fast lap in on the first lap probably, but I was pleased with that. We go to Switzerland now and I like it there. I have been strong there before. We are working on things. I made a few changes to the bike in the last week and tried just stepping everything up. We have got… I do not even know how many races left. I am just focused on trying to do the best job I can and try and get back on the box.

You have obviously done a lot of races at Lommel and had success at them as well. How do you sort of rate this track compared to previous years? Was it rougher, easier, drier etc? What label are we putting on it?

Last year was definitely wetter. It rained. This year they flattened quite a bit of it. It was still really, really hard, but the berms were quite like you had to be quite aggressive. There was not much rhythm to it. Then the singles you are landing really heavy. It was a tough one. ’14, ’15, ’16 I cannot really remember too much, but on the 250… It was always hard but I think the heat definitely made it tougher this weekend on everyone because it was only fifteen minutes in and you are thinking, “This is going to be tough.” Everyone’s feeling the same. For sure, it was a tough one this year. Definitely probably one of the toughest that we are going to have and probably the toughest of all year now.

Let’s smash out two hot topics, seeing as people will shout at me if I do not ask. Firstly, we know you are kind of up in the air with what you are going to do next year. Anything going on? I guess it is just lots of talking. Jamie [Dobb] is doing lots of talking, anyway.

Yeah. At the moment, nothing is sorted out. At the moment I am just focused on doing my job and making sure that the Rockstar Energy Husqvarna Factory Racing team are getting the best results that I can do for them and that is it at the moment. I am focused on making the best possible situation I can for them and doing the best job that I can. That’s all I can do. I am lucky Jamie Dobb is my manager and he is able to sort those things out. I am not sure. I am not the only one in this situation, so it’s all right. Hopefully this podium might have helped a bit.

No. I have not heard, but I know Mark [Chamberlain] will be busy. He came to Switzerland last year, so maybe they are going out then? I really think Ben Watson’s been riding really well and he deserves a place on the team. He has done a great job the last few races and it is good to see. It is good to watch him and good to see him progress. I did not watch him this weekend, but I know for sure he has been riding really well. I think he will definitely be a strong one for MX2. We will see. I do not know.

You have got Shaun [Simpson] and Tommy [Searle] both riding really well at the moment. Mark’s obviously got to decide on the 450 guys. I would hope that I am in a good position to be on the team. I like RedBud. I have raced there before. I have been good there before actually on a 250F in the AMA Nationals. I feel like I am coming into my own in this part of the season. I know it is a shame we struggled a bit earlier on in the year, but I feel like now we are getting there. It will be good. I do not know for the ‘Nations, but I am one hundred percent for Team GB and going to do the best job I can if I do get picked. Hopefully we do so we can go and hopefully try and get back on the box again.