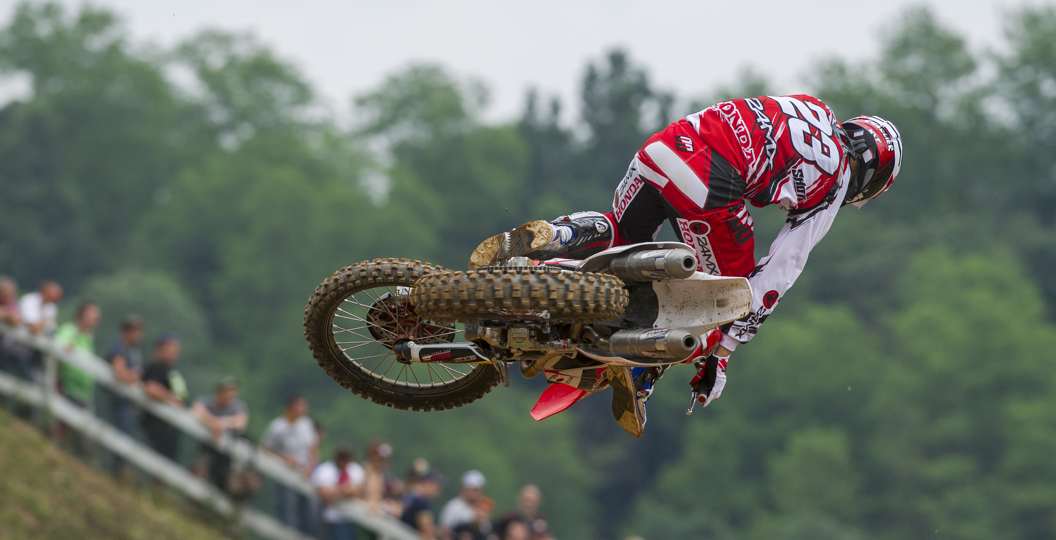 After his shock win at the Belgian championship race of Kester Christophe Charlier was keen to continue the trend in Italy. Whilst debuting the 2016 Shot Racegear line Charlier rode to 12th place in Saturday’s free practice which he backed up by an impressive 4th in time practice. Struggling with front brake issues in the qualifying race the 23-year old Corsican was forced to retire.

While Saturday had been nowhere near the predicted deluge of rain, on Sunday the steep uphills were slippery, muddy and extremely challenging after horrendous downpour. Christophe and many of his MXGP colleagues sat out the Warmup session to concentrate on the  two 30 minute plus two lap sprints. In spite of an unfavourable gate pick he rode his Dunlop-shod CRF450R to a strong start inside the top-7. Unfortunately the 24MX Honda rider found himself caught up at the inside of the tight second corner. As a result Charlier was relegated to a spirit-crushing last place. However some good lines and good-old fashion persistence allowed him to take 11th. A remarkable effort given how hard it was to pass and how many riders struggled to find a comfortable pace.

In similarly tricky circumstances Charlier good off to another good start in the second moto. Circulating in eighth at the start of the race he lost ground when he ran into trouble with his goggles. Once his vision problem was restored the former European MX2 champ would plug away to re-pass Bobryshev for tenth.
The popular Talkessel circuit in Teutschenthal will host the Grand Prix of Germany next weekend for round 10 of the series.

Christophe Charlier: “Believe me I’m glad that Sunday is behind us! But these kind of conditions are a part of racing as well. I was a little unlucky on race day but overall it was a solid, building GP. We made some more progress in terms of lap times, I had two good starts and I’m having fun on the bike again. In MXGP all details are important but we’re working in the right direction. I’m regaining my confidence and we continue to make improvements on the bike.”