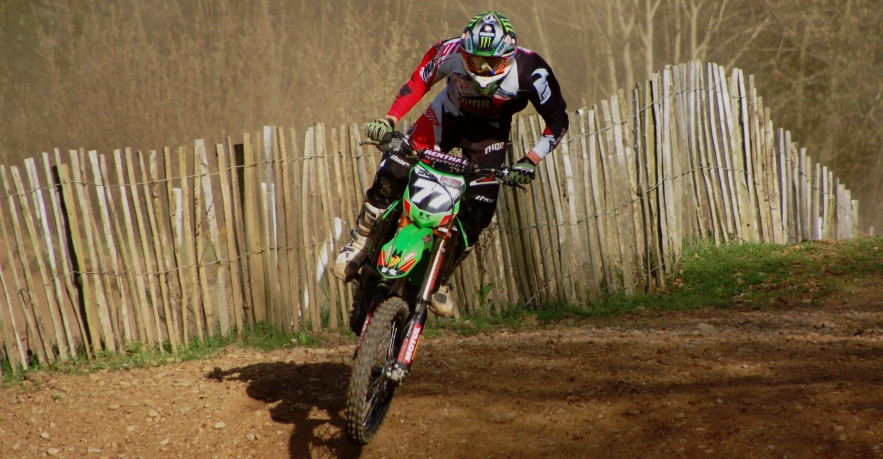 Catching up with: Jason Meara

Young Jason Meara provided a bit of a shock at Lyng by winning both MXY2 races!

The 16 year-old raw talent from Northern Ireland now leads the series but Meara isn’t getting carried away and knows there will be a lot of hard work and ups and downs ahead.

Meara has shown everyone in Ireland know how talented he is over the last couple of years but he knew he had to bring that talent to England if he wanted a shot at the big time.

A switch to Watt Kawasaki in the off season has paid dividends but Meara knows he has to perform this year to give himself a chance at his dream of becoming a professional rider and getting full British Championship ride in 2015.

At Lyng he showed everyone the potential he had and then followed that up by winning the first round of the Irish MX2 championship last weekend.

We caught up with Meara to find out about his off-season changes and his blistering start to 2014.

MX Vice: You moved to Kawasaki in the off-season and switched from the British adult championship to MXY2. That is a lot of changes, are you happy with it?

Jason Meara:  Yeah the Kawasaki is a lot faster than the Honda and it handles pretty similar so I am happy with the bike for starts. It has helped me get out of the gate which was my downfall all last year.  So that has helped a lot.

I decided to drop down to the MXY2 this year and try and win. I have plenty of time to go to the adults so we will see how it goes.

MX Vice: You were a bit under the radar coming into Lyng and didn’t have many races before to prepare, what were your expectations?

Jason Meara:  Going in, deep down in my mind I wanted to be on the podium but to take two holeshots and two wins with leading every lap – I didn’t expect that!

MX Vice: Where the races easier than you thought? Or was the competition tougher that you expected?

Jason Meara:  The competition was tough but the starts helped. My first two laps were really good and I was able to get a gap and then I could just ride my own race.

MX Vice: After the first moto where you thinking you could win again or just going for the podium?

Jason Meara:  Well it was a big high after the first race but I wanted to do the same in race two although I would have been on the podium but a wins a win so I will take it!

MX Vice: So you have the red plate, how do you feel about the rest of the rounds, are you thinking title?

Jason Meara:  Yeah that’s the goal to take the title. I will give it all I have got to do it!

MX Vice: How do find the tracks in England have you ridden the tracks you’re going to have to race on?

Jason Meara:  I have ridden Canada Heights and I rode Fatcat just last week but it doesn’t make a difference to me, a track is a track, we will try and do the same as Lyng anyway.

MX Vice: Are you going to try and do any of the EMX2 this year?

Jason Meara:  I was thinking of trying to get into Matterley Basin but I am not sure what way the schedule is here at home and if I am able to race it, so I will see what happens.

MX Vice:  And just on today, you won the MX2 overall in the last turn – it was a tough!

Jason Meara:  Yeah! The first race I was up front riding really good with the 450s but then had a big crash and that knocked the wind out of me and I was in a bit of pain for the second two races. The last race I made it tough for myself with a crash and then I slowed down with two laps to go because I thought the race was over and lost the lead again! But I got it back going into the last couple o turns so I was happy enough with that!