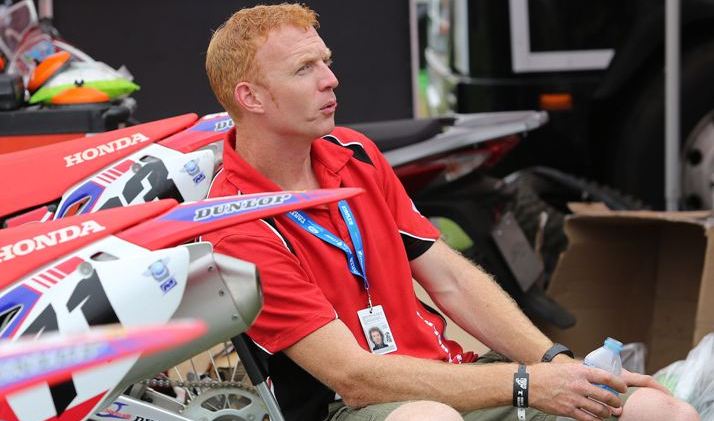 Catching up with: Gordon Crockard

Gordon Crockard is into his second year of being a riding coach for the successful EMX150 series run by Honda.

With Grand Prix wins and three British Championships to his name, plus running his own training camps in Spain the last few years, Gordon is more than qualified for the role of bringing young talented kids through to international stardom.

We sat down with Gordon to discuss the recent EMX150 training camp in Spain as well looking forward to the five rounds of EMX150 racing that beings in a month’s time in Valkenswaard in Holland.

We also discovered he is keen to do more racing himself if a suitable opportunity arises!

MX Vice: The Honda EMX150 is starting in a month’s time…

Gordon Crockard: We are into our second year and it is a three year commitment from Honda to do this 150 job, we have five rounds and we had a training camp just last week in Spain.

We have a full grid plus reserves which is a big improvement over last year. Last year it was difficult due to rule changes, advertising and things like that. Last year was pretty much a case of showing and now a lot of guys are pushing to get it.  Of course we just don’t want full grids we want full grids of good riders and we want the best kids in the world to try and win this.

MX Vice: Is the standard higher this year than last year?

Gordon Crockard: The standard is higher, the top guys, Albie Wilkie won at Matterley Basin last year and he is in it again so I don’t think there is anyone a lot better than Albie but there are some guys that could take it to him. I think the standard of the winner is going to be the same as last year, which I think is a high standard but we have a lot more depth now with a lot of guys that speed.

We have five rounds with two races at each round which is a ten race championship whereas last year it was three rounds with only one race at each. So there is a lot more this year in terms of what the riders get out of a weekend, they get their two races and all the normal practice and qualifying, we have Valkenswaard which will be the first time they will have been in sand, they have Matterley Basin at the end of May, we have Teutschenthal which is of course a great circuit, we have Sweden in Uddevella which is great it’s going to Scandinavia.

Scandinavians’ have a great develop development system, they do a lot with the younger riders and the federation really are involved in coaching their riders. Sandinavian’s are very proactive with applying themselves to being better riders so it’s great that it’s going to Scandanavia. Then we have the final round in the Czech Republic in Loket.

So five rounds and we have already done a training camp we have full grids and 2015 there is already another series planned and we would look to expand the rounds and again we are always looking to attract the best riders from around the world.

MX Vice: How do you go about choosing the riders?

Gordon Crockard: It went through the federations. For instance the Dutch had their own selection day where they had five or six of our 150s and they invited who they thought were going to be good and then they selected out of who showed up who they wanted to be put forward to us. My boss Gerry is involved in that end of it, you have to submit an application and you fill out your CV so to speak and your accomplishments.

I didn’t have to do a selection this year but it isn’t something I’m scared of because it’s quite obvious who you select, it’s the fast guys, it’s easy! It’s laptimes and of course you look at their technique and the way they ride the bike, because you might have a kid who is fast but is at his limit, because of his style he is just fast because he has the throttle open. Then maybe there are other kids who have a lot of ability and a lot of room to improve but they are just not opening the throttle enough. So you have to take that into consideration as well.

MX Vice: How did the training camp go? It seemed very professional in the video.

Gordon Crockard: The training weekend was brilliant. There was a lot of structure and great opportunity for the riders to get some bike time on that bike prior to the first race.  A lot of them had never rode a 150 before so putting them in a non race situation gives them some track time to get familiar with the bike.  We give them options on harder fork and shock springs or lighter or fork and shock springs. We give them options on bar raisers so all those things can be done in a non time pressure situation when it’s on a training camp.

What I thought was brilliant was that I got to ride a 150 for two days and I am quite happy to say I was faster than all of them! Why that is brilliant is not to flex my ego, but for those kids they might actually sit up and listen to what I am saying to them. Let’s remember the age of the them, they are age 11-15, well some of them kids were two years old when I was winning GPs, so they maybe don’t care what I say! So in terms of me instructing, coaching and teaching, they need to value what I am saying so they have to a level of appreciation of what I can do and that I am qualified enough to tell them.

So riding the 150 was awesome it is a really fun bike to ride. It took me minute to get used to the size of because it is obviously really small and we were doing some massive jumps and big whoop sections. It was a great exercise for me to do as well in terms of knowing the capability of the bike. So when we were doing track walks I was able to say to them, ’this is the maximum you can do with this thing, you can make that step up.’

So the camp was good from that side of things and it gave all of the dad a chance to get familiar with the bike because they have a role of being mechanic on the bike over the weekend and it gave them a chance to understand the structure of who’s in charge, who to go to for technical assistants. We have three mechanics there, two Kiwi’s and a guy from Northern Ireland, Michael Gibson. Michael has been a mechanic for me so he is working for them as well.

The parents that are looking after the kids bikes are familiar with knowing who to communicate to if they need a filter, chain lube or spare parts. They know the system.

It was education for riders and parents and also for me because I have learnt how kids prepare in different ways to help them. If you can understand their personality you are able to them more. It’s a competition at the end of the day and these boys are finding their feet. They all want to know who is faster and where they stand. So they are really competitive and although it is a training camp I was constantly policing them from racing each other! We didn’t want danger, we didn’t want them racing.

MX Vice: Were you working more with technique and lines?

Gordon Crockard: Yes technique and lines, just navigating the track, brake application, stand up, sit down all the methods to be fast and safe and preserving the bike as well. A lot of them aren’t mechanically minded because they are too young and they are on the limiter, revving and clutching. It is totally unnecessary, you have to teach them that if the bike breaks you don’t get any points!

It’s easy I find not because I know it all but because I have been through all the steps they are doing. I enjoy it.

MX Vice: The tracks are quite varied too.

Gordon Crockard: Yeah that’s a good thing actually, I support that because I think it’s fair, the same guys still win and it’s a much better test for them. The opportunity to ride on GP tracks- the more variety they have the better.  They are going to develop into international riders much faster if they have that variety.

We teach them everything, we teach them how to do interviews, to represent themselves in a professional manner for your sponsors in the paddock. I just keep telling them to watch the pros, because that is top level and that is what you are aspiring to get too. Don’t have your work area like a  helicopter crash, have your tools in one area, your oils in another and your bike facing the same direction as everyone else. Act like you are an actual pro because you are representing Honda, you are representing yourself in the world view – the media is watching.

We teach them all these things because they have never had to think about that before.

MX Vice: What about translators?

Gordon Crockard: We have translators although the main language is English and they know that because that is pretty standard in motocross anyway. But we have French translators Dutch and Flemish translators, Spanish , German so we do have them amongst the group and it’s successful.

MX Vice: Are you planning on doing any racing this year?

Gordon Crockard: I am, I want to race because I enjoy it, if there is a track I like I will go and ride. I am practicing loads, I have my practice track back so I am riding loads now which is great and if opportunities come up – it happened last year when Nagl got injured I was asked to ride the GPs, but my thumb was in no condition to do it but it taught me to be ready. I still train pretty much every day and I have the same lifestyle as I always have.

I ride bikes because they are fun and I train because I like being fit. Josh Brookes is living here so we are always training anyway so I am going to be ready to ride bikes but I am not going to get sucked into going every weekend just because there is a race on.