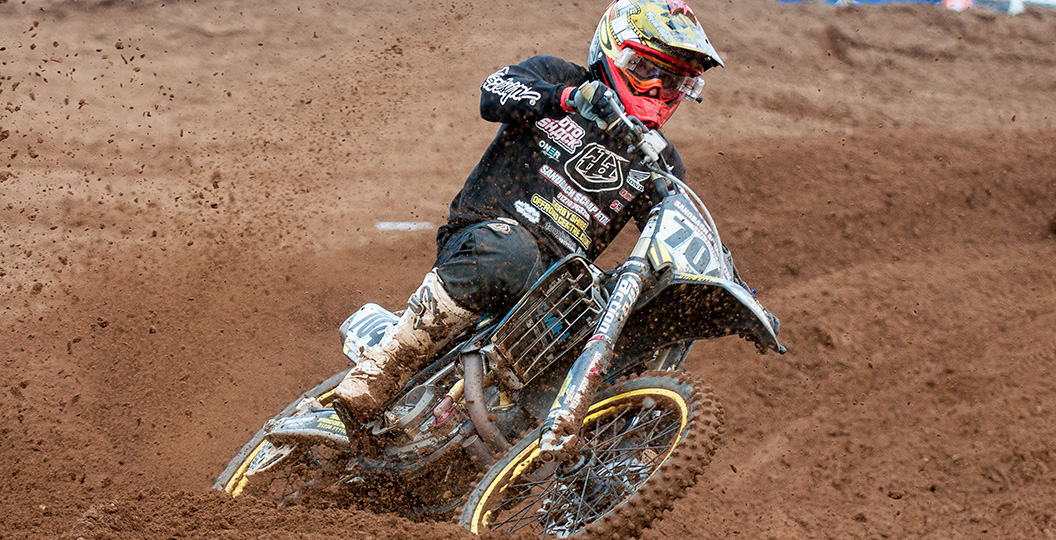 Catching Up with: Ashley Wilde

Ashley Wilde has posted consistent podium finishes as a privateer for quite some time, but he is finally going to get the opportunity to race for one of the elite teams in the paddock in 2015, as Buildbase Honda is giving him a shot. We caught up with Wilde at Culham to discuss this, among other things.

MX Vice: Ashley, it was revealed this week that you are going to join the Buildbase Honda squad in 2015. What are your thoughts on the new deal?

Ashley Wilde: I am over the moon really. I can’t wait for next year to get started and to get the ball rolling with the team.

MX Vice: You have obviously put a lot into your racing over the last couple of years. Do you feel like you have been rewarded for all the hard work that you have put in?

Ashley Wilde: Yeah, definitely. It shows hard work does pay off, as hard it seems as times. I’ve gotten better over the last three years, and this year I have been a consistent top fifteen finisher and pushed towards the top ten. I’ve done that as a full privateer that works during the week. Hopefully with this new opportunity I can start to push towards the top ten all of the time.

MX Vice: A lot of people see your sponsors and presume you are a team, rather than a privateer that fits racing around work.

Ashley Wilde: Yeah, I’m a full-time privateer. I’m very fortune to have the sponsors that I do; a lot of them have stood by me for four or five years now. They put the money up every year and get me racing. I work Monday to Friday, but I’m lucky to have a business partner that lets me get out in the week if we’re not too busy. Most times I’m out on a Wednesday. I’m not one of those people that won’t admit that I ride in the week, I do. However, the way that it has been this year I have been working a lot of the time.

MX Vice: Will the sponsors that you have accumulated over the last couple of years still be backing you in 2015 as personal sponsors?

Ashley Wilde: Yeah, I think so. Everyone who has helped me over the last four years is really happy for me and to see that the hard work has paid off. So, yeah, I think there will be a lot of people sticking with me as personal sponsors, which is great.

MX Vice: What races are you going to do in 2015? Will you be doing the Maxxis British Championship and the MX Nationals? Are there any GPs on the cards?

Ashley Wilde: I’m not too sure about GPs, but definitely the Maxxis British Championship. I’ll speak to the team, but I’m sure we’ll be doing some other championships because eight races aren’t really enough.

MX Vice: Is there any added pressure on you going into next year?

Ashley Wilde: No, I definitely don’t feel like there is any pressure. I have earnt my place there; I haven’t just been given it. Obviously there will be a little bit of pressure, but when you ride for a team like that there is bound to be some. No one has put any pressure on me, so hopefully I’ll just have fun and enjoy the experience.

MX Vice: I guess it’s going to be a little weird for you going into next year with the big awning, which is very different to the set-up you have with your family at the moment.

Ashley Wilde: It’s definitely been very close with the family over the last couple of years, and it is going to be a massive change. But I think it is going to be good. I’m really looking forward to doing some testing, which is obviously something I haven’t done before, because I haven’t had a budget. I don’t know what my dad is going to do with himself; he’s going to be very lost!