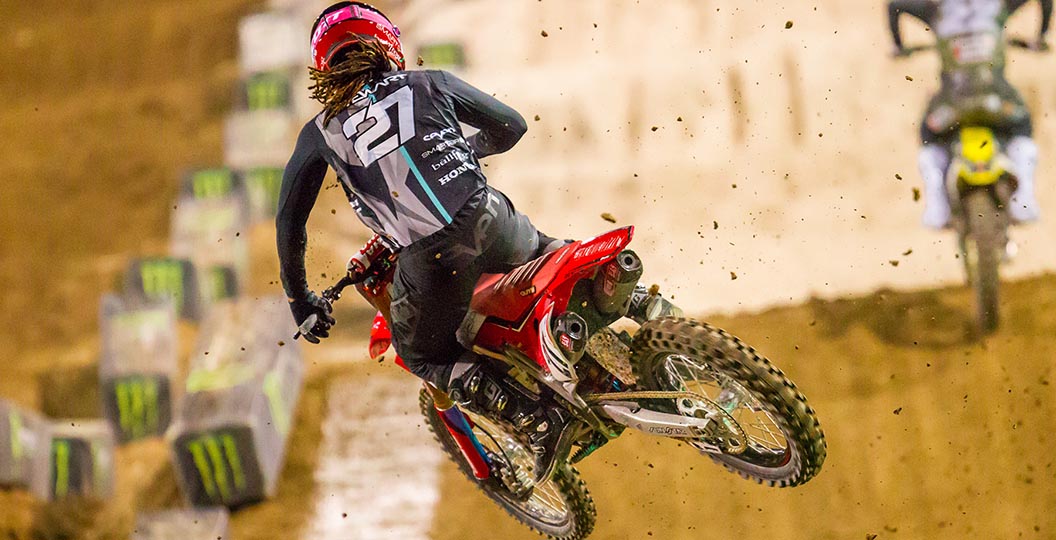 Although Malcolm Stewart competed in Canada, with a lot of success, a couple of weeks ago, the Monster Energy Cup acted as his real debut with the MotoConcepts Honda squad. It went fairly well too, as he ticked many boxes and even slid into the top five in the overall classification. Stewart discusses his night in Las Vegas, as well as his future, in this exclusive MX Vice interview from the event.

MX Vice: Pretty good day all around, really. You showed speed and consistency. Top five at the end of the day. Happy days.

Malcolm Stewart: Yeah. It’s cool. This is like my first big race with the team and stuff, so I’m happy. The day was great. The track was super fast. It is what it is. We went out here and got a solid top five. I think my teammate Vince [Friese] got seventh overall as well, so it was a good day for the whole crew. I definitely want to thank Mike Genova for even just giving me the opportunity to even let me ride the motorcycle. That’s awesome. Tony Alessi has been fantastic. We have all been working hard. It’s been a long couple weeks for me. I’m still getting used to the bike. From here on out, we all got a big learning curve. So, after tonight, the team… We all just sat down and talked to each other. For us, it was good. It’s nothing but positive from here and I’m excited.

Did anything earth-shattering come from that talk with the team? Anything you have kind of learned that you are going to take forward to make big improvements?

Yeah. I got a lot of improving on myself and I can tell you the last two weeks… For me from two weeks ago until now is definitely ten times better. I can’t wait for what Anaheim 1 brings me, so as long as we stay trucking. Hopefully I can earn this spot. I think the resume is looking better now.

Speaking of making changes with yourself, I think I read recently that you have actually done that. Like away from the track, you have kind of fixed your situation a little bit and made sure there’s nothing but positivity around you?

Yeah. Like I said, I’ve been working at the W with [Gareth] Swanepoel a lot. Just kind of having fun. Just doing me. I think getting to ride this team… Definitely making some changes. The biggest change for me is I don’t have to worry about… I don’t have to be a team manager and a rider at the same time, because that’s just way too much stress factor for me. As long as I can go to sleep knowing my motorcycle is going to be there, that’s the biggest picture for me. So now I can just really focus on myself and only grow and be better from there. I think that’s one of the biggest changes for me and I’m happy about it.

That’s a good point. I guess a lot of people hear that and be like, “You were on JGR last year. That must have been the same.” Even with that deal though, you were kind of still being the team manager for yourself every two weeks or every time that deal needed to be discussed again.

Exactly. There were times where I would do two weeks and then it would be like, “What do we do after the race?” Then they’ll let me know Tuesday. It was stressful, man. But honestly, so far everybody’s been doing good. It’s still early. The goal is to stay trucking. Hopefully we land something here and we keep going, man. That’s really what it is about. Like I said, I’m working hard and I can’t wait for Anaheim 1.

I think the best thing about today is that fifth overall was a great result and definitely something to be happy about. I feel like with your speed and everything though, you could have even done better. That’s obviously a nice feeling to know that.

Yeah. Like I said, we are getting more used to the bike. Not only that, plus we got some more overseas races. We have got Tokyo. We have Spain. We got Italy. We have Switzerland. Like I said, I got myself a world tour. So the more time, and the more time I get more gate drops, it’s only going to make me better.

You learn that intensity. That’s the biggest thing. I’m riding against the top guys, so that’s obviously a big learning curve for me. It was fun. It was a fun event. Obviously gate drops, suspension and chassis set-up. Obviously you don’t want to set your chassis up too much for this type of event, but there are little things like the dragon’s back. There were a couple things that you would have at a normal supercross track and I think it’s nothing but positive. Any gate drop is positive. That’s the bottom line.

Obviously it is tough to say, but nothing’s locked in with this team for next year yet. Is it looking good though? Are things going in the right direction?

Well, as of tonight I think getting a good resume and getting a top five should definitely help a little bit. Hopefully I’ll know something here in the next couple days.

Do you even have to worry about a back-up plan if this doesn’t work out? Are you still thinking about that in the back of your mind?

If it don’t work out, you ain’t going to see me at supercross. I’m way too invested in trying to make this deal happen. I don’t know. I’ve done threw all my eggs in one basket, so let’s not even think about option two. We’re thinking about option one only.