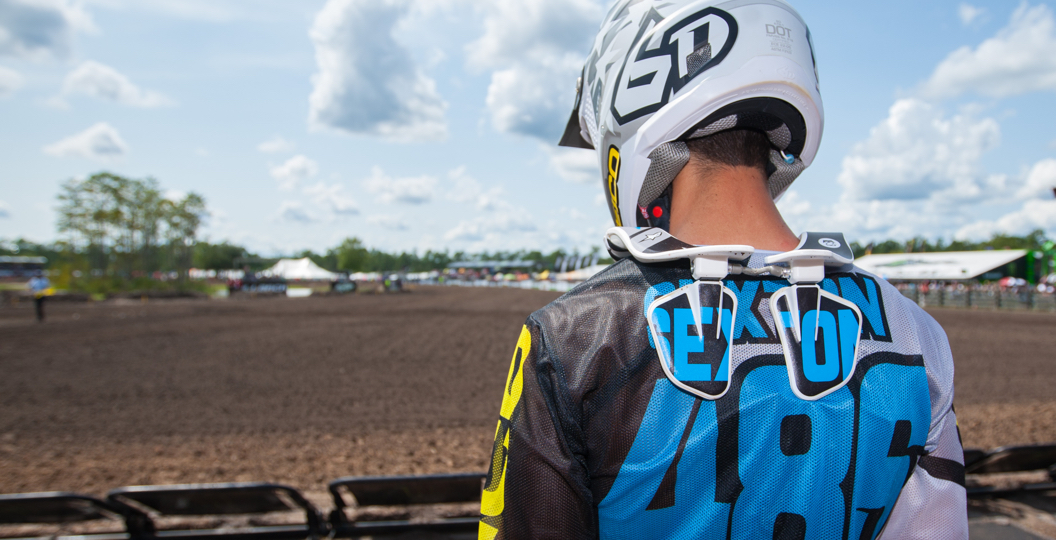 Chase Sexton may have only completed ten races as a professional, including the Monster Energy MXGP of USA, but he has certainly left a lasting impression on fans across the globe. Poor starts hindered the GEICO Honda rider at WW Motocross Park, but he once again showed both grit and determination whilst cutting through the field. That tenacity left him sixth overall on the day.

MX Vice: I feel like the results were good this weekend, but the riding was better than they showed. I think that, with a good start and all of that, you could have easily been on the podium?

Chase Sexton: Yeah, for sure. First moto was pretty good. I came from probably around twelfth to sixth, so I felt like I rode pretty good in that. In the second moto I thought I had the holeshot. I looked over and I got blown by. I don’t know if I missed my shift, did it late or something. Then I was still about fifth, but I made a mistake and went a little further back.

I made a few passes but, honestly, the track was pretty hard to pass out there. I think the man-made track makes it one-lined, but I felt like I rode good. Sixth overall, which is pretty good, but I think a podium was realistic this weekend, for sure. RJ [Hampshire] won, so it was a good weekend. I think we can take some positives away, but it was good racing some different people and being able to race the GP guys.

Considering how hard it was to pass out there, did it surprise you how much progress you made each time? I haven’t looked into it, but you probably made more passes than anyone else.

Yeah, for sure. It was definitely hard to pass, but I feel like my speed was good enough where I could pass up to around the top five. Then they started going around my pace and it started to get harder. I made a lot of passes though – that’s for sure. I made a lot of passes this whole year, even in the motocross series. It was fun. Like I said, it was fun to race other people and the guys that do this each weekend.

Obviously we are in America, but you don’t really have any man-made tracks like this in your series. So, with all the jumps and everything, did you like it compared to what you have? Did you feel like it was overkill a little bit?

Maybe a little bit overkill? The jumps, some of the faces and stuff were a little bit for how small the jumps were. There were definitely some big jumps. I feel like on the GP circuit, there are a couple man-made tracks, so these guys might be a little more used to it, but it was a good track. It was a really fun track, to be honest. I think it made it a little hard to pass, but we’ll take away the positives from this weekend and move on.

They definitely built up the lips before your second moto, right? Did you notice that?

For sure. I came around and they built up the two tabletops in the back, then they came around and there was a single table. I cased the crap out of it on my sight lap. I was like, wow, you guys are taking it to a whole new level. I think they wanted to do it for the crowd. It was definitely fun. I can’t say it wasn’t fun. It was just a little hard to pass, but it was a good weekend. We’ll go onto the off-season now.

I know a lot of the regular MXGP guys struggled in the heat this weekend, but obviously you train in Florida. Is this normal for you? Did you feel it at all?

Yeah, it was normal for me. In the first moto I think I spent a little too much energy coming through the pack, but I had to do what I had to do. I kind of ran out of gas in that second moto. I hit kind of a wall. It was just from the heat and stuff. It never gets easier, training in this stuff, and for the GP guys this was probably a shocker. It was definitely physically demanding. It was good racing in this heat though. I have trained all year to be able to race one race in the heat. It was good and it was fun.

The format here is a little different, especially with the metal starting gates and just the way they do things. Did anything kind of spin you out or muck you up? Was there anything that you just struggled to get used to?

The starting procedure is a little different for me. The qualifying race I had no idea what I was doing up there. Honestly, I just did what everyone else did. When they clicked it into gear, I clicked it into gear. When they started revving the bike – that is when I did. I got used to it by the end of the weekend though. It is cool, because they take it so seriously. I think it is good for us to come here and race. It is definitely a good series. I think these guys have a good future and I think the series is going to keep getting bigger.

I want to come back and do more of these, for sure. We were talking and maybe do a couple of rounds overseas next year to actually race those guys on their soil, but these guys are fast. They kind of caught me off-guard a little bit. Yesterday was a little rough for me. I think the Americans came around a little bit the second day, for sure. I think there were three of us in the top six or so, so it was good. It was really fun for sure.

You have blown my mind a little bit with that. How are you going to fit in some more GPs overseas with your schedule? You have got like twenty-nine races. That is 450s, but you’re still preparing for supercross in that time and all of that.

It is definitely going to depend on what my schedule is, but possibly if I do east coast I might have a little bit of time. When do they start?

Beginning of March. Maybe you could do some in the east-coast swing?

Yeah, for sure. Even when the west coast guys come back, maybe I can head over and do a couple of rounds. I think it is a really good series and I’m definitely looking forward. I was talking to the team owner and he was possibly thinking about doing some more of these, so I was automatically down to do more. I think it could make me better, for sure, on outdoors and get me ready for that outdoor series next year. If they have a USGP next year, I’ll for sure be in it.

Quickly recap your season in America or at least the races you did after injury. I feel like it was the same as today. The results could have been much better and, once you kind of looked into it, it was sneaky good.

Yeah, I was kind of under the radar a little bit with my starts. They have not been the best. I figured them out at Indiana last weekend. I rode third. I think everyone saw I ran into the back of a lapper on the last lap, but I have definitely shown my speed and my potential. I think everyone’s been happy with my results this year. I think when we get those starts down I think next we’ll be podium contender and race-win contender, for sure. I ended up getting ‘Rookie of the Year’ from the series, so that was good. It is a good accomplishment. I wanted that when I started. It was a good series and I’m glad to get this off-season going and take some rest.

Just talk us through what you have planned for the off-season. Are you going to be in full swing? Do you have to let some of your injuries from earlier in the year heal up a little more, take any plates out or anything like that?

Actually I’m getting some screws out on my knee from my rod in my femur, but it takes like ten days to heal my stitches then I’m good to go. I’m going to take some off time, but for my injuries and everything I feel good. My body is fully healed and I feel like I’m back to normal. We’ll take some time off and then go into boot camp for next year and get into supercross.