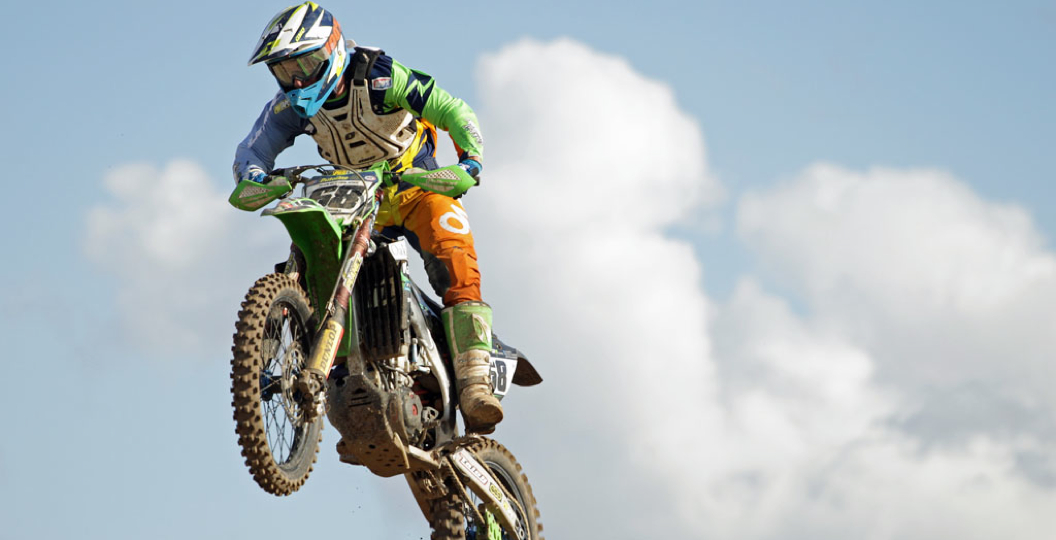 The decision by ACU Events to replace Drumclog in Scotland with the unproven track of Cusses Gorse in Wiltshire for last weekend’s penultimate round of the Maxxis British Motocross Championship proved to be quite fortuitous for Oakleaf Kawasaki. An hour’s drive from team HQ, the track had been prepped perfectly by track owner and manager Justin Barclay, and it held up well against the severe weather the night before the event.

Qualifying got underway on a wet track, and while Shane Carless had to make do with twenty-third after struggling to find a setup that worked, Priit Rätsep was able to improve on his eleventh place in qualifying in the super-pole to end ninth-fastest.

Rätsep’s first race was steady with a start and finish in tenth, punctuated by several skirmishes for his position. The second, after a mid-pack start, was a steady rise up the ranks before settling in in eleventh at the finish. In the final race though, a terrible start left Rätsep in the back of the pack. With the track drying quickly and the loosening dirt making the track tricky, Rätsep found himself struggling to make headway, ending the race in seventeenth and the day outside the top ten, in eleventh.

Carless suffered from mid-pack starts throughout the day, but despite this, still put in incredible effort to overcome that disadvantage. The first race saw him move quickly to fourteenth before a struggle to get into a groove cost him a place in the points. Once back in a rhythm, he quickly recovered to eighteenth. The second race started outside the points; Carless quickly had his rhythm back and found himself in nineteenth before a big crash cost him dearly. After restarting dead last, he was able to recover seven positions in four laps to end twenty-seventh. The final race was his best. Another start outside the points ended in fifteenth after a quick move into seventeenth and some quick gains in the closing minutes. With two races in the points, Carless ended the weekend eighteenth.

Not a good day today, I think. My speed was all-right for that kind of track, actually, but I struggled with the starts. When you don’t get the start, you have no chance to get back through from the back. I finished tenth and eleventh, and the last race was really bad, eighteenth, for eleventh overall. The track was rough today and for the last race already quite dry and slippery, so I struggled a lot. The positive side is that I’m still ninth in the championship, so no loss there, yeah, and I’m healthy. Again my thanks to Oakleaf Kawasaki who did a great job this weekend, and we’ll see what happens next.