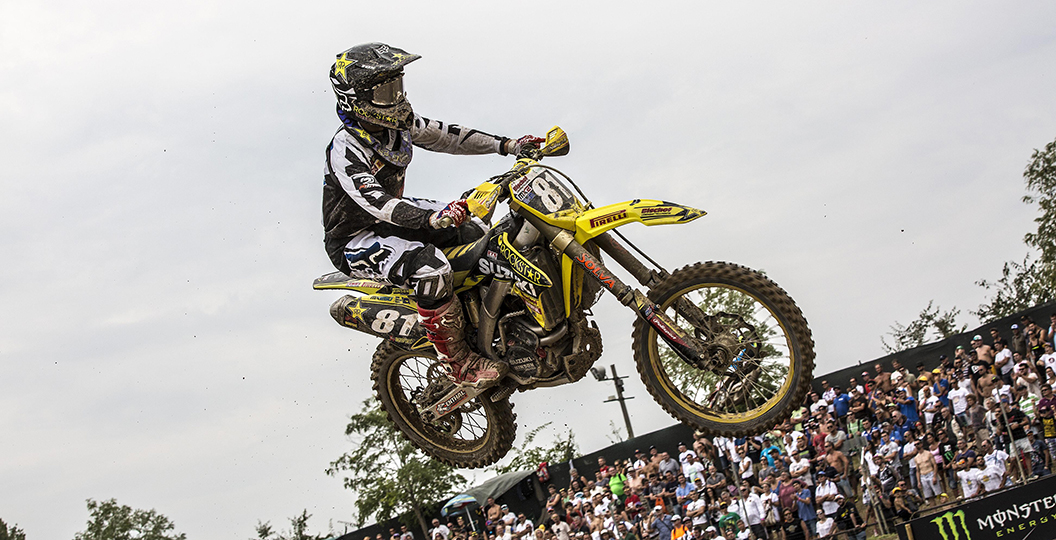 Rockstar Energy Suzuki Europe’s Jeremy Seewer finished 15th under cloudy skies at the Grand Prix of Lombardia but was fortunate to walk away from the 15th round of 18 in the FIM Motocross World Championship after a huge crash at the start of the second moto.

The Swiss was joined at the Mantova circuit in Italy by German talent Brian Hsu, making his MX2 GP debut, and the teenager enjoyed one excellent moto and, like Seewer, suffered bad luck in the other sprint.

The meeting at Mantova took place on the rough but hard-packed Italian sand and while the terrain offered grip and line-choice, it was also tricky to find a decent rhythm because of the many jumps and obstacles.

Seewer had Hsu as a team-mate through the Grand Prix sessions and races for the first time this season. The Swiss had previously been carving a lone furrow on the RM-Z250 but the German had been drafted into the MX2 fray ahead of his final appointment in the EMX250 European Championship next week and with an eye to perhaps making the jump to the highest level in 2016.

In the first race Seewer repeated his holeshot performance from the Qualification Heat on Saturday where he headed the pack around the tight left-hand first-turn then got boxed-in and fell. From there he had a hectic race ahead to score ninth. The diminutive Hsu was also well placed and ran a consistent rhythm in eighth position and ahead of fellow EMX250 racer Adam Sterry to stake a firm claim on the ranking (incidentally what he had also achieved in Saturday’s Qualifier).

By the time of the second moto, Seewer was determined for more but his race was almost curtailed before it started as he became entangled with several riders that developed into a mass pile-up. The ‘#91’ was able to pick-up the RM-Z250 and again made a comeback to the top-10 but his motorcycle did not last the distance. Hsu was also involved in the mess at the start. The teenager was able to recover but soon pulled into the pits with a broken radiator.

Seewer is sixth in the MX2 championship standings and 14 points behind the absent Jeffrey Herlings and his objective of a top-five finish for his second campaign in Grand Prix.

The Grand Prix of the Netherlands takes place next weekend at Assen and is the final appointment for MXGP on European shores this year.

Jeremy Seewer:
“The day started really well with the holeshot but Max [Anstie] took the better line out of the corner. There were a lot of us really close together and I found myself without any space and I crashed. It was so difficult to come back in those conditions. I like the track but it was a special place to pass: just one main line and it was difficult to carve around and you had to be smooth. Being aggressive didn’t work. Ninth was OK but a bit disappointing after Saturday. In the second moto my start was OK but [Damon] Graulus just came across and we caught handlebars. It was a hard crash and I had pain in my neck. I rode back to 10th but then the bike stopped before the end. This was one of my worst days this season but I hope it will turn around at Assen. Top-five in the championship is still there and is still my goal.”

Brian Hsu:
“Today was just for experience and I wasn’t so confident in the first moto because everything was new, but I got a good start and was almost first! I settled into a rhythm, I knew I could run and eighth was ‘wow’ for my first GP. I couldn’t believe I was in the gate doing MX2 and had that result. I felt much better for the second race with the track and my confidence was up but I got swept-up in that massive group and it all happened so quickly. My foot got stuck underneath the bike and Guillod’s bike was also on top. I was going to continue but my radiator was destroyed. Anyway, I’m happy with what I did.”