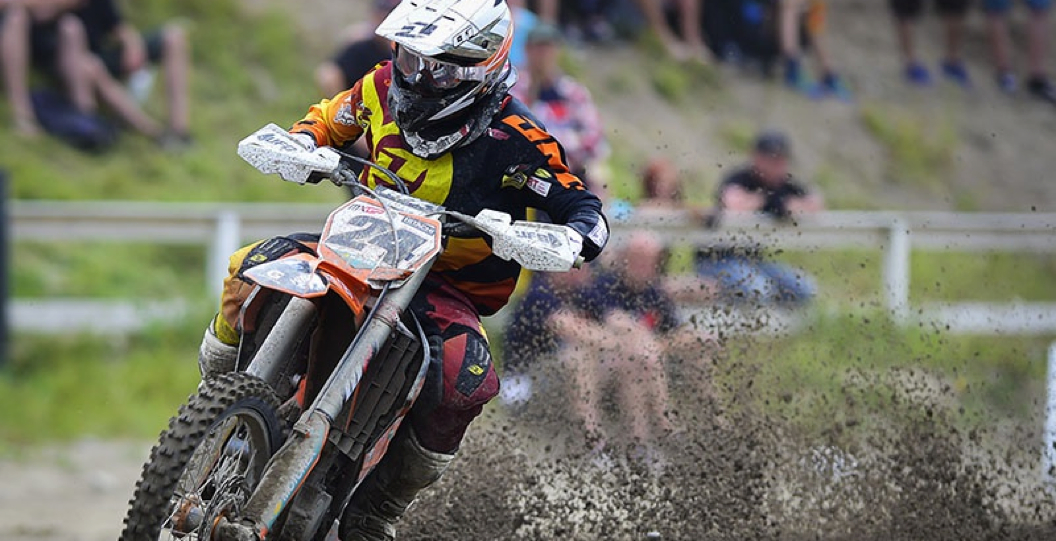 Hitachi Construction Machinery UK KTM could have been on the cusp of their first MXGP podium finish today at Hyvinkää for the Grand Prix of Finland and their thirteenth meeting of the seventeen on the 2014 FIM Motocross World Championship slate. 17,000 spectators witnessed Shaun Simpson experience contrasting motos. The Scot had to recover from two early crashes in the first race to take twelfth spot but then ran as high as second in the next moto and finally claimed a season-best finish of third by the chequered flag.

One week after the slippery hard-pack of Uddevalla in Sweden the team encountered a different kind of terrain in Hyvinkää. The shallow sand was treacherously bumpy with many small ripples and edges among the stony surface. Lap-times were short and the layout was fast, flat and basic but the rough course help raise some of the technical difficulty.

Simpson scored a decent third position in qualification on Saturday (his career-best is a second place) and had firm designs of breaking into the overall top five on Sunday. In the first moto the Scot had a disaster in the opening metres. He tangled with another rider and hit the ground, thankfully without injury. The 26 year old quickly restarted and pushed as hard as he could from last to arrive to twelfth.

The second moto was fantastic. Shaun deflected the close attention of Max Nagl in the fight for third place during the initial phase of the race and this turned into a tussle for second spot when Jeremy Van Horebeek crashed. Later Steven Frossard joined the spat and although the British Championship leader could do nothing about the Kawasaki rider’s pace he pulled clear of Nagl and then used his last remaining ebbs of energy to resist the attack of Kevin Strijbos on the last lap. At one stage Shaun had fourth place overall but the shifting order of the second race – coupled with his bad luck in the first – meant he ended the weekend with seventh overall.

Events in Hyvinkää mean that Simpson slips to sixth in the MXGP world championship standings, 11 points behind Frossard.

In the MX2 class Mel Pocock was frustrated to enter the start gate almost last on Sunday. A broken rear wheel ended his progress on Saturday and the DNF meant a lowly gate pick. Doing his best with the position handicap Mel made ground and took sixteenth spot at the first time of asking and then tried to do better in second race but classified seventeenth.

Ben Watson was in action again with the 250SX-F in the penultimate round of the European EMX250 Championship. The teenager flew to fourth position on Saturday in the first moto. He seemed to tire in the second race when holding ninth and was demoted to tenth with three laps remaining. Despite the low-key end to the weekend Ben still holds third place in the championship standings and will have to beat Adam Sterry in the Lommel sand on the first weekend of August to make sure of a final top three finish.

Round six of eight in the Maxxis British Championship in the sand of Fatcat in Doncaster is the next engagement for Hitachi Construction Machinery UK KTM next weekend before the race truck then packs up to leave for Loket and the Grand Prix of Czech Republic and their last race meeting in July.

Shaun Simpson: “Ups and downs like we’ve had before. I was looking forward to this race but if I’m totally honest I never really enjoyed the track all weekend. It was harder than last year. My speed wasn’t too bad yesterday. I got a good start in the heat race, stayed out of trouble and checked a few lines. Took third behind Van Horebeek for a good grid position for today. I wanted to get out of the gate and do my thing and I believed the podium might be in reach but in the first one I went down the straight and Cairoli came across on me and pushed me into Goncalves. My handguard got caught under my front brake so it was jammed on. I went from left to right, right to left and my legs came off and I crashed. My leg was caught in the rear wheel. By the time I got going from that and caught up to the back of the pack I crashed again. I battled the whole moto and came up with some reasonable speed. Overall I was quite happy to salvage something. In the second one I was happy to prove that Saturday wasn’t a fluke and I could ride at the front. I had spent a lot of energy in the first race. I wasn’t completely ‘hanging’ but I was tired. If I could have conserved something from Moto1 then the next race would have been a lot easier and I could have gone with Frossard. Overall, best moto finish of the year and a good haul of points. I kinda kept my gap ahead of Nagl although Frossard had a good day and now I need to catch up by eleven. British Championship next weekend and then onto Loket and Lommel, two tracks that I like.”

Ben Watson: “Saturday was good but we made a mistake with a new clutch which made the start difficult but I managed to push my way through to fourth. That wasn’t bad. Today was different. I had another bad start and struggled to pull through. Ninth wasn’t the end of the world but it could have been better. Lommel in a few weeks and I’m looking forward to it.”

Roger Magee: “After yesterday’s strong qualification in MXGP by Shaun a potential podium was within sight in today’s GP of Finland. However the rather freak crash on the start-straight before the first corner in moto1 meant that the chance of an appearance on the box was extremely diminished. In true Simpson-grit he regrouped for moto 2 and brought home p3 at the flag despite extensive pressure from a number of the factory team riders for the full duration of the race. Mel’s starts let him down today and he circulated mid-pack in both motos for two points scoring positions. Hitachi KTMUK now look forward to next weekend’s sixth round of the British Maxxis Championship where we will be looking to maintain the red plates in both classes.”