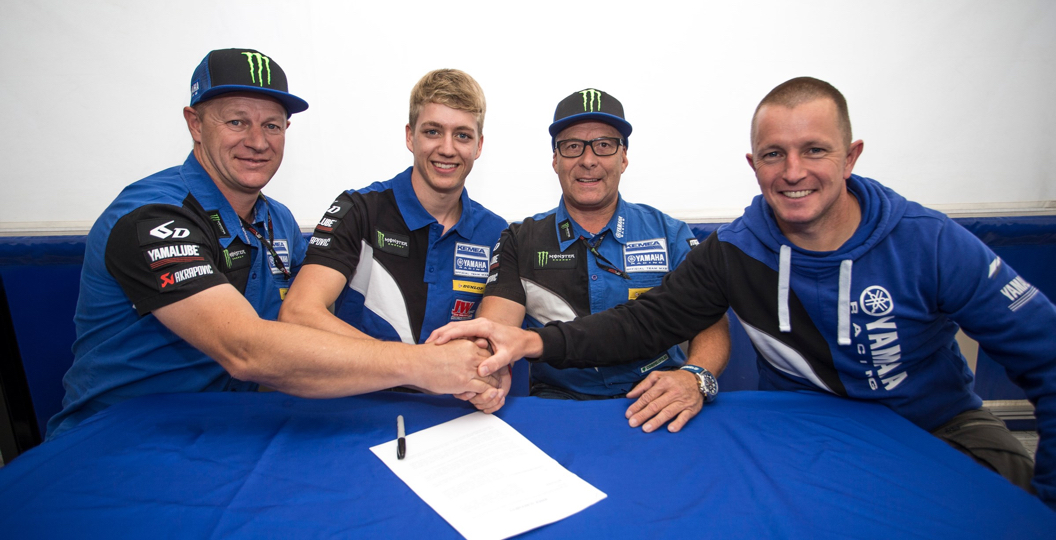 The team will place a Yamaha YZ250F in the capable hands of the 20-year-old Brit where he and his teammates, 22-year-old Russian talent Vsevolod Brylyakov and Belgium’s teenage sensation, 17-year-old Jago Geerts, will hotly contest the highly competitive 2018 FIM MX2 World Championship.

Ben Watson has been on Yamaha’s radar for many years having won multiple national championships in the youth ranks before making the leap into the European EMX250 class in 2014, where he proved his worth by finishing inside the top-three in four races, two of which, he won.

After finishing fifth place in the 2014 EMX250 Championship, Watson entered his rookie season in the 2015 FIM MX2 World Championship where he finished 21st despite missing a number of rounds. Having learnt and developed from his first term in MX2, the promising young Brit lined up competed in three rounds of the 2016 MX2 World Championship before a leg injury at the MXGP of Argentina put him out for the remainder of the year. Fully recovered in 2017, the teenager completed his second season in MX2 where he finished inside the top-ten in eight races and was fifteenth place in the final classification.

The entire Kemea Yamaha Official MX2 team are all set to begin their preparations for the 2018 FIM MX2 World Championship season. The new combination of Watson, Brylyakov, Geerts and the potent YZ250F is an exciting prospect. All of the riders will be based in Belgium, less than 45 minutes from the team’s base in Genk. They will be trained and mentored by former world champion Jacky Vimond with added support from the team manager and legend in his own right, Marnicq Bervoets.

Ben Watson: “I am ecstatic to have received this opportunity. I have worked my whole life to get to the top of racing and to finally feel confident with the team and support that I am getting, it’s really exciting for me. It’s even more exciting to have a fresh start, and to ride a new bike and be around new people. I have heard so many people talk about how awesome Yamaha’s are, and now I finally get to experience it. We are ready for the new chapter.”

Erik Eggens: “This is a very exciting agreement. We have been following Ben for many years, right from when he was young and excelling in the youth championships. He has been on the radar for some time and I feel that we can give him the support and stability he needs to achieve everything he is capable of achieving. We look forward to seeing Ben progress and succeed on Yamaha.”

Hans Corvers: “We are happy to sign Ben. I have been watching him for many years, but really closely for the last 12 months. I have seen that he has some good qualities. He has the speed, he gets good starts but for whatever reason, up until now, something has been missing. I believe that we, the bLU cRU and Yamaha can offer him what he has been missing and this is something I look forward to seeing.”