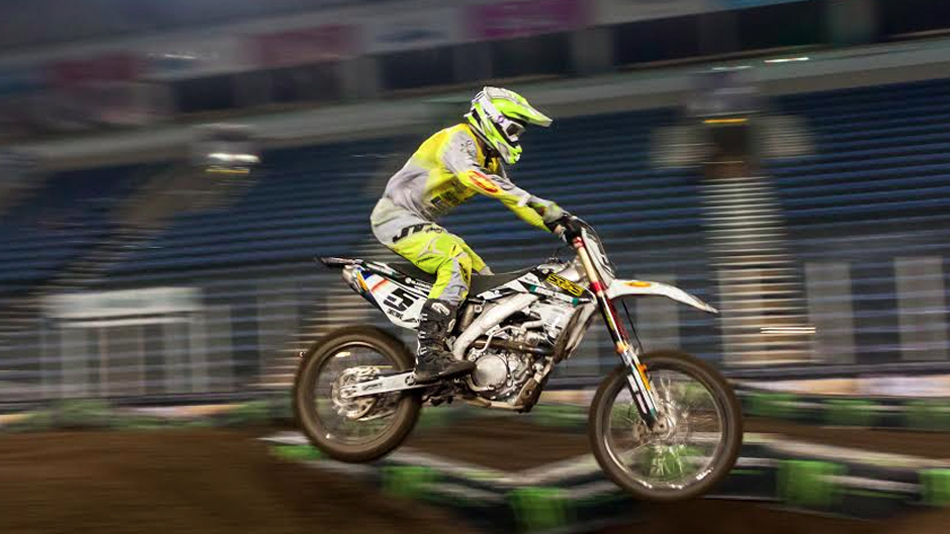 The biggest story of practice was the track itself. After three laps of the first practice of the day it was apparent that dealing with ruts would be an issue.

The track crew where having to bring the machinery out after nearly every practice to take away the ruts on the triple so it will be interesting to see how they handle it tonight as there won’t be time to do that after every race.

The riders I spoke to also weren’t overly happy with the just how soft the track was, but they all admitted that was the way it as going to be and they just have to get one with it. The riders were already down to the plywood in places in practice creating an even bigger challenge coming out of the turns.

As Steven Clarke explained, the layout itself is good but the soil just isn’t hard enough and it’s almost like a sand race.

But the positive for spectators at least is that the nature of the circuit will mean lots of mistakes from the riders and passing should be easier than it as last year.  The whoops especially are proving a challenge with the soft dirt just making a load of ruts.

Onto the riders, and Kristian Whatley was impressive right from first practice. He hit the track with aggression immediately and was one of the first guys to nail the whoop section. Whatley has podium potential tonight.

Another impressive British based rider was Neville Bradshaw. He looks so comfortable on the indoor circuit and despite the difficult conditions looked to be enjoying himself.

Home rider Gordon Crockard had a nightmare. He didn’t even get to go out in the first qualifying practice after bike problems and despite attempting the second qualifying session, was still experiencing machine trouble and is in a rush to get the machine ready for tonight – Gordon is already playing catch up.

The boys to beat though could be the foreigners. Frenchmen Cyrille Coulon and especially Fabien Izoird are looking great, while Angelo Pellegrini and Loic Rombaut were at the front of group one in the second timed session and were logging consistent laps.

It is hard to get used to seeing Elliott Banks-Browne on the 450 Thorpe Honda but he was looking solid out there as was Jamie Law and Steven Clarke.

Tyler Villopoto was very aggressive but whether he will be able run the pace in the night show remains to be seen.  Daniel McCoy was sketchy! The Aussie was all over the place, had a few close calls and fell a couple of times, however each lap he came back with the same throttle happy enthusiasm he had the lap before.

Brad Anderson was good out there and already got involved in a bit of contact so expect Ando to be ready to fight for every place tonight!

Special mention to James Harrison who acquitted himself well in the pro class, he could even qualify for the final if things go his way. He certainly isn’t out of place out there.

In the Rookies class Kellett, Harrison and McCormick look to be the guys to beat.

So that’s it for practice, the real things begins at 7pm tonight and it should be entertaining because we still are no closer to knowing who could win – the whole thing is wide open!