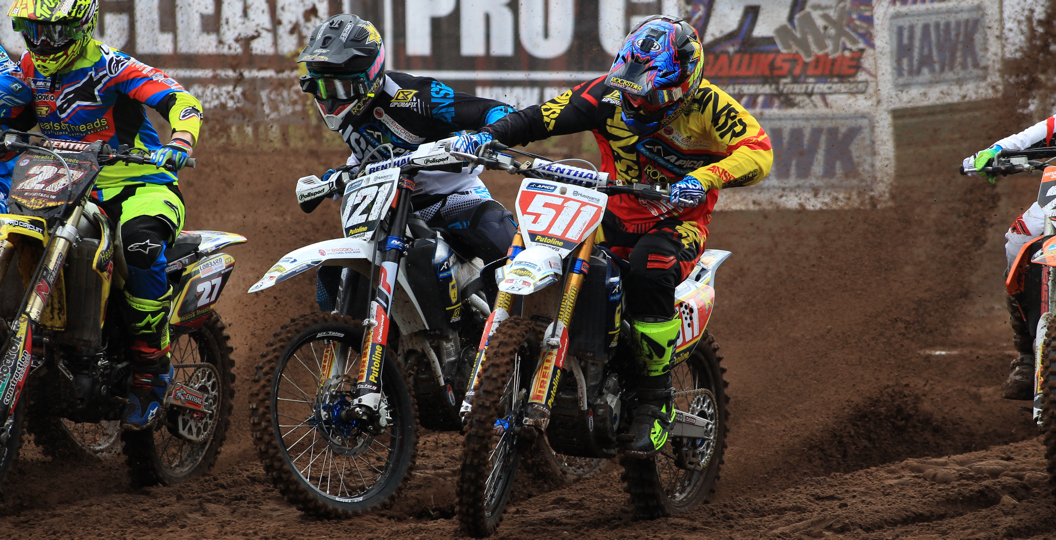 The third round of the Maxxis ACU British Championship supported by Pro Clean saw the Apico Husqvarna head to their home round of the series at the famous Hawkstone Park. The team arrived leading both the MX2 and MXY2 championship but unfortunately young Alexander Brown was forced to miss the event due to his recent injuries.

Light overnight rain meant the track surface was in great shape before the morning practice and qualifying sessions. In the MX2 class Bryan MacKenzie on the Apico Husqvarna was the fastest of the pair in fourth place ahead of team mate and Championship leader Steven Clarke in fifth.

After the lunch break in was time for the first MX2 race of the day and when the gate dropped Bryan MacKenzie got out front for the early race lead ahead Clarke fourth. As the race continued, MacKenzie started to pull a healthy gap at the front, while Clarke moved into third. At the halfway point Clarke made a couple of mistakes and would slip back to fourth. MacKenzie rounded off a great opening race to claim a start to finish race win with Clarke in fourth.

The second of the MX2 races would see Clarke make a good jump out of the gate but was forced close to the fencing around the first turn which dropped him outside the top ten. MacKenzie also suffered bad luck on the opening lap and would have to mount a charge from outside the top 25 to recover into ninth place at the finish. For Clarke a crash on second lap hampered his progress further but the Apico Husqvarna rider battled back to claim a well-deserved third place with MacKenzie finishing in ninth.

Clarke’s 4 -3 scorecard gave him third overall on the day, meaning he is only trailing the championship lead by six points. Race one winner Bryan MacKenzie finished fourth overall and moved up to third in the Championship. In the MXY2 class Alexander Brown slipped to fifth in the championship and is just 28 points of the lead.

The team now have three weeks before they head to Desertmartin in Northern Ireland for the fourth round.

Steven Clarke: “It’s been an up and down day and I’m gutted too have lost the Red Plate as it looked really good on the Husky. I’m happy with the second moto as I terrible start with hitting the fence and then crashing on the second lap to come back and finish third. It shows that I’m in this for a fight and not going to give up. I wish I rode better in the first race as I was riding tight and using bad lines made it hard work for fourth. But all things aside I’m fit and healthy and ready to go again at the next round.”

Bryan MacKenzie: “I was surprised to do as well as I did today as I’ve had food poisoning this week and I was just looking to survive the weekend. In qualifying I never set the world on fire with fourth. The plan for the first race was to ride steady but when the gate dropped I was in a good position from the start and just rode a smart race to get my first win in two years. The second race I had a bad start then get caught in a crash on the first lap and from then it was just a hard race to get back to 9th. Overall it has been a good day with a win in the first race and moving up to third in the championship.”

Stuart Summers (Chief Technician): “It’s been up and down today with Bryan getting his first race win, but Steven suffering arm pump and slipping back to fourth behind title rival Martin Barr. The second race saw Bryan suffer the bad luck and have to come from a first lap crash to finish 9th and Steven was also on a damage limitation race after a bad opening lap but recovered to 3rd. Overall it’s been a good day considering the bad luck that we had at times but we will come back stronger again at the next round.”