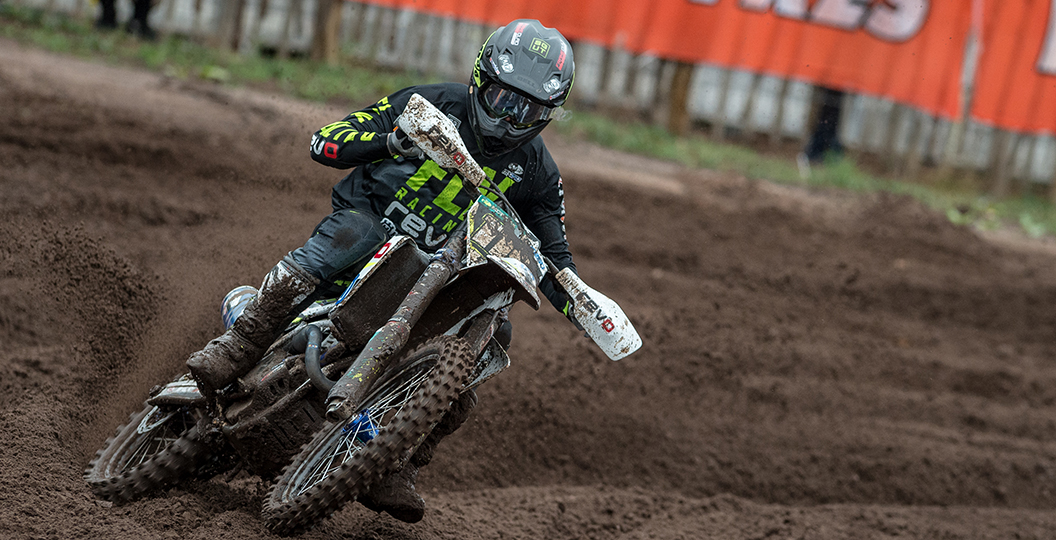 The sixth round of the Maxxis British Championship, not seventh, is in the rear-view mirror, now that all of the races have been run at Hawkstone Park in Shropshire. It is actually a miracle that all of the races were completed, because most anticipated a tricky day. Torrential rain battered the circuit on Saturday, first of all, and then things were not supposed to be much better on race day.

There was a bit of drizzle on Sunday morning, not that it made a difference to the conditions or mood at the facility. There was a downpour during the final MXY2 moto, which acted as a stark reminder of what could have been, but everything was fine. Perhaps the threat of rain was what drove so many fans away? There were not a lot of spectators at the venue, just as most saw in the GoPro footage that Tommy Searle captured, which left some perplexed. There are many fans who feel as though the FIM Motocross World Championship needs to visit Hawkstone Park, yet they do not support the circuit when the domestic scene rolls into town.

It is unlikely that this caused fans to turn away, as it seems that fans were not aware that this was going to happen, but it cost more to enter Hawkstone Park than any other Maxxis British Championship round. Twenty-five pounds was the entry price for adults, as opposed to twenty pounds at every other event on the calendar. What was the reason for this? The ACU confirmed that this was nothing to do with them, as the club made that decision, but a representative from the club was not available for a quote at the time of writing. It only cost twenty pounds at Hawkstone Park last year, so this was new and, based on the attendance figures, is something that may be scrapped.

Honestly, based on data that has been collected in recent years, the prices and weather probably did not drive too many fans away. It was sunny and cost less to enter last year, yet there was still no one there. It was earlier in the season as well! Everything was different twelve months ago and, despite those factors, the outcome just ended up being the same. One could argue that Hawkstone is one of those rounds that does not attract as many fans as some other stops on the domestic tour, but they do not have an issue when it comes to pulling people into the international event in February. There are some who desperately want answers to these questions.

Those who did not make the trip to Hawkstone Park missed out on some action that turned things upside down. The MX2 class is probably the most intriguing now, seeing as that thing is really up in the air. Conrad Mewse will continue to be the favourite to win, if he can race the penultimate round at Foxhill in around five weeks, but there is no firm answer on that currently. It sounds like a finger injury is the greatest issue and why he travelled to hospital immediately following the moto, as there was a fear of ligament damage. It is tough to delve too much into that topic without knowing the extent of that injury that he sustained.

It is just heart-breaking that this happened to Mewse. It seems as though he made a bit of a breakthrough ahead of the Grand Prix of Belgium, which was run last weekend, as he admitted exclusively to MX Vice that he has not been dedicating his life to the sport and that would change from this point on. It was quite clear that he was ready to knuckle down and had just one thing on his mind. Now, one week on, he faces some uncertainty and may not get an opportunity to prove a point. Confirmation on his plans moving forward should be released within the next twenty-four hours or so, so stay tuned to MX Vice.

Say Conrad Mewse is going to miss a round or even the rest of the season, it is going to be an all-out duel to the final chequered flag between Josh Gilbert and Mel Pocock. The pair are separated by a single point now and have traded momentum on many occasions. It is difficult to figure out who has the edge in that fight. It would be quite the story if either rider pulls it off and takes the title though. Everyone knows about the hurdles that Pocock has overcome to get back to this level and how incredible it would be for him to hoist a gold plate in the air, something that he has not done in the Maxxis British Championship.

It would be inspiring for Pocock to match the level that he was at before his injury and even go quite far beyond that. It is a story that fans across the globe would want a piece of and acknowledge. Speaking of the level that he was before his injury, when was the last time that he managed to win two rounds of the Maxxis British Championship in a row? Pocock was on the top step of the podium at Desertmartin (3-1-1) and then Hawkstone Park (1-4-7) in 2012. Two thousand two hundred and six days passed between that event and the round on Sunday. A movie could be made about everything that went on in that time.

If Mel Pocock is going to overhaul Conrad Mewse in the points, he has to go through Josh Gilbert, who still runs second with two rounds remaining. It would also be amazing if he clinches the championship, but for very different reasons, as who would have predicted that? Had someone gone to Las Vegas and put money done on him clinching the title this year, the return would be incredible. There is a long way to go to get that point though. Hawkstone Park was actually a bit of a missed opportunity, as he could have taken the red plate had he put himself in better positions out of the gate.

The speed that Josh Gilbert showed around halfway into race one was really impressive. It was not enough to match the times that Conrad Mewse was posting, unsurprisingly, but he was a tad better than his competition. The same could not be said in moto two and, whilst a third and a sixth were not disastrous, it could have been so much better. Starts were the problem and a small mechanical problem in that second moto was a part of the reason why he nursed the CRF250R home in sixth. Twelve points were lost to Mel Pocock on the day. It was interesting to hear Dave Thorpe mention his disdain for concrete starts post-race. Perhaps it is time to eliminate some of those and implement some consistency?

Although the start was not kind to Josh Gilbert on Sunday, Jake Nicholls used it to put himself in amazing positions in each moto. The second start was not quite good as the first moto, as he had to watch Tommy Searle ride off into the distance, but who cares? Nicholls gained twenty-seven points on Bobryshev, his title rival, in one day and that is all that matters. It is so rare for someone to gain so much in just one day. This thing seems to be over now, unless disaster strikes. Nicholls could take fourth in the last four motos and that would be enough to clinch.

Winning the Maxxis British Championship is a goal that Jake Nicholls has worked towards for so long and finally achieving that goal, after making the greatest transition of his career, would be so poignant. Bearing that in mind though, would travelling to the USA a week before the final round really be the best way to prepare for such a big weekend? The Motocross of Nations, which takes a lot out of a rider both physically and mentally, is one week before the reserve round. Admittedly, that point is almost irrelevant now that he has such a comfortable cushion and could even wrap this thing up at Foxhill. There are a lot of riders who would put a lot of thought into that whole situation though.

Evgeny Bobryshev and Graeme Irwin can head over to Motocross of Nations with no worries, as it currently stands anyway, seeing as they face such a significant deficit in the points. It is actually unknown whether either rider will make it there though. Bobryshev told MX Vice exclusively that Russia may not make it to RedBud, because of funding, and then Irwin is currently dealing with back issues that need to be checked out. “I have a bulging disc in my back and I am in agony,” Irwin said in a statement. “I need to go and see a doctor and get it sorted. It is such a shame because the last few rounds have been going so well, excluding Duns that is. That was a nightmare.”

Considering that he managed to finish less than a second down on Jake Nicholls in moto one with a bulging disc in his back, Graeme Irwin deserves recognition. There were a few times where he would lose a second or two and then, just one lap later, he would be nipping at the rear wheel of the CRF450R again. There is no doubt that he is riding better than ever with Hitachi ASA KTM UK, even though the results may not look quite as glamorous as they did last year. That is the strangest thing about the Maxxis British Championship though. The number of high-level riders changes so much from one year to another, so it is tough to make comparisons.

Riders like Gert Krestinov are another perfect example of it. Winning races and landing on the podium became normality twelve months ago and now, with the same team, he is floundering in the lower half of the top ten. Does that mean that he has regressed? Not at all. It is just that riders like Jake Nicholls, Tommy Searle and Evgeny Bobryshev have been inserted in front of him. Those riders would have beaten him last year as well. It is unreasonable to expect Krestinov, who has had limited success at the world’s highest level, to run with those guys consistently, yet he is judged solely by how the results look on paper.

It is always important to delve beneath the surface and Hawkstone Park was no different. Tommy Searle was so fast in both motos, as well as qualifying, but missed out on the overall victory after crashing at the start of the first moto. To claw his way back up to third in that race, despite facing a hefty deficit and having to work through much slower traffic, deserved more credit than it got. Does that say something about the field as well? Nicholls and Searle effectively lapped up to the top ten in each race on a track that has exceptionally long lap times. What would have happened if it was regular track and each lap was thirty seconds shorter?

Anyway, back to Tommy Searle. The way in which he dropped everyone in that second moto and posted times that were three or four seconds a lap quicker than his competition was just mind-blowing. It is so obvious what he can do on an incident-free weekend and, with good tracks coming up on the FIM Motocross World Championship calendar, it will be interesting to see how the rest of August goes. Frauenfeld-Gachnang and Sevlievo should be great for him, then it looks like Afyonkarahisar could be similar. Now, about that Motocross of Nations spot…