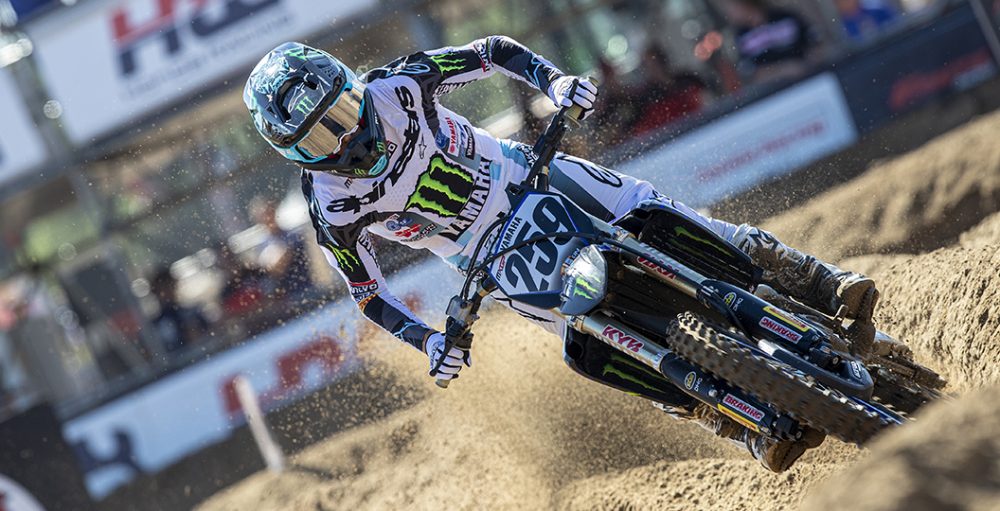 Having ended the 2022 MXGP campaign with a largely excellent run of results, Glenn Coldenhoff will be keen to carry this momentum into 2023.

Entering his third, and potentially final, year under the coveted Monster Energy Yamaha Factory awning, the Dutchman will be eager to hit the ground running and immediately impose himself.

Although he finished a notable fifth in the standings last term behind only champion Tim Gajser, Jeremy Seewer, Jorge Prado and Maxime Renaux, some difficulty in a couple of the early rounds and at the end prevented him from soaring higher.

Getting his 2022 crusade off to a promising start by going 9-3 for fifth overall at Matterley Basin, this was a solid opener indeed that was accentuated by his two blistering starts, especially considering he suffered heavy arm-pump in the first moto.

Heading to Mantova next, a venue he’d enjoyed plentiful success at previously, Coldenhoff endured a weekend to forget. Unable to find his rhythm or feel at ease on the bike, the Dutchman could only muster 17-14 finishes for an unsatisfactory 17th overall.

“I didn’t feel great today. I was struggling quite a bit, only the practice sessions were good, but from that moment on I felt like the track got really sketchy. No excuses though, I just didn’t feel right. We tried hard to get comfortable, but it didn’t work in the first moto, and it was a little bit better in the second, but if you look at the results, I am disappointed,” he lamented on the Yamaha website.

After a solid outing in the Dutch championship prior to the MXGP of Argentina, where he was able to make strides towards feeling better on his Yamaha YZ450FM, he performed far better at the scenic Villa La Angostura circuit.

Securing an improved fifth overall by virtue of his 8-6 moto scores, much positivity could be found from the way he handled the fast, sketchy conditions, made ground on suspension settings and how he fought through to sixth from the back of the field in the second race.

His efforts would serve as a catalyst for an uptick in fortunes, for he was superb in Portugal, with him strikingly winning the qualifying race before picking up brilliant 4-3 finishes on raceday to secure fourth overall, just two points shy of the podium.

Following that up with further top five overalls at Trentino (fifth) and in Latvia (fourth), where he logged moto scores of 2-11-5-3, this was further evidence that he was gathering momentum and finding some crucial consistency. Not bad at all considering he faced adversity in the form of two crashes at Pietramurata and a broken shifter in the qualifying race at Kegums.

While the #259 couldn’t transfer his form into a muddy, treacherous Maggiora, with 10th overall all he could muster, he bounced back admirably in the sandy confines of Sardegna.

Riding expertly at the draining, deep Riola Sardo track, his experience and nous shone brightly on his way capturing third to bag his first overall podium of the term. Forced to come from the back in the opening moto, Coldenhoff’s valiant charge saw him come home in eighth. Then, in the second, the way he managed the sweltering heat and exacting surface was extremely impressive, with him eventually claiming second behind the imperious Calvin Vlaanderen, who went 1-1.

Recalibrating his focus to the hard pack of Spain, there was much to like about his efforts here too, which saw him not only win another qualifying race but also produce two accomplished rides on the Sunday to go 5-2 for second overall.

Coldenhoff then made it three consecutive overall podiums, with his triumph in the second moto at Ernee after a frustrating first moto that featured multiple crashes, propelling him to third overall.

Things took a downturn in the next couple of rounds in Germany and Indonesia to halt his progress, with an off day in the former and illness in the latter, ensuring 10th and fifth was the best he could do.

Back ready to put his best foot forward at Loket even if he wasn’t feeling 100%, going 4-4 for fourth overall was definitely the uplifting outcome he needed, which instilled him with the confidence he needed to embark on a fantastic purple patch.

Still under the weather heading into the famous Lommel, there’d be no denying the masterful Monster Energy Yamaha star, however, for he doggedly battled on to achieve a phenomenal second moto victory to accompany his fourth in the opener to bank third overall.

“It’s been a tough week. I have been sick and didn’t do anything all week. Normally when you go into a GP in Lommel, you are prepared, motivated and confident you can win. I didn’t feel like that this time. My energy was low. I knew I had to preserve my energy in race one or I would have nothing left for race two. I managed to still finish fourth and knew that with a little bit of luck I could still take the overall win. But it didn’t happen that way. I have to be happy, and to take a moto win here in Lommel is also pretty special,” he insisted in his post-race comments.

Making the trip to Sweden hoping to replicate his GP win from 2019, a back healthy again Coldenhoff rode with polish and composure once more. While he couldn’t elevate himself to the top step, grabbing third overall was a fitting reward for his measured riding.

His undoubted highpoint of the season then happened in Finland, as he claimed his first overall victory in the testing sand of Hyvinkaa. Underlining what a force to be reckoned with he is in these conditions, Coldenhoff rose to the challenge to flex his muscles against his adversaries in the blistering heat, with his triumph in the second moto particularly special, where he took the holeshot and scorched off to a commanding win.

“It was a good weekend. I have waited way too long for this. I have always believed in myself, and I know I am capable of being here and doing this. I am just really happy,” he declared after clinching his first overall triumph in roughly two years, on a day where Yamaha also remarkably filled all the podium spots.

“This is my first win with the Yamaha as well, and it’s really nice to pay them back with this victory. They have put in a big effort to help me get here, and in the last few weeks it has really paid off.”

Holding third in the championship entering the last two rounds, all eyes were focused on his battle with Prado and Renaux to see who’d come out trumps. Disappointingly for Coldenhoff, though, the Spaniard and his teammate pipped him due to the Dutchman’s issues with starts and untimely mistakes at St Jean d’Angely and in Turkiye.

Ultimately settling for a credible fifth in the standings, this was a handy return for what was a consistent crusade aboard his Yamaha that saw him achieve three race wins, a grand prix win, six podiums and two qualifying race wins.

To close out his year, Coldenhoff was selected for the 10th time to represent the Netherlands at the Motocross of Nations, an event he’s previously enjoyed immense success at both individually and collectively. But it wasn’t to be this time around for him, with an incident-filled weekend, that featured a frustrating crash and him being landed on, meaning he had to settle for 13th in his class.

Signing on for another year under the Monster Energy Yamaha awning, where he feels right at home and knows he has the support to compete at the highest level, Coldenhoff’s ready for a big 2023. “I’m really happy. I’ve been with Yamaha for two years, and this season, I feel like we have made some big improvements,” he asserted.

“I am looking forward to keeping the same group of people around me. We have built such a strong relationship in a short time, and they have always stood behind me, so I really appreciate that. I like the setup and the people we have around us from the osteopath to the trainer, all these things contribute something, and I think this is important. Here, I have everything I need, and we have some even better things coming, so I look forward to it, and I am ready to go for it again next year.”

Already getting valuable time on the new bike and well aware he has what it takes to mix it with the many elite pilots in MXGP on a variety of surfaces, next season looms as a terrific opportunity for him to build on his consistent 2022.

Not a man to be underestimated or written off even though he’s in the twilight of his career, it wouldn’t be a surprise at all to see the vastly experienced star contending for wins and podiums again.

While much of the attention will focus on the return of Jeffrey Herlings, reigning champ Gajser and a fully fit Romain Febvre to see if they can resume their captivating duel from 2021, it’s certainly worth keeping an eye on the silky smooth, technically gifted Coldenhoff, who’s proven over the years what a class act he is and that he can well and truly match it with the best of them on his day.