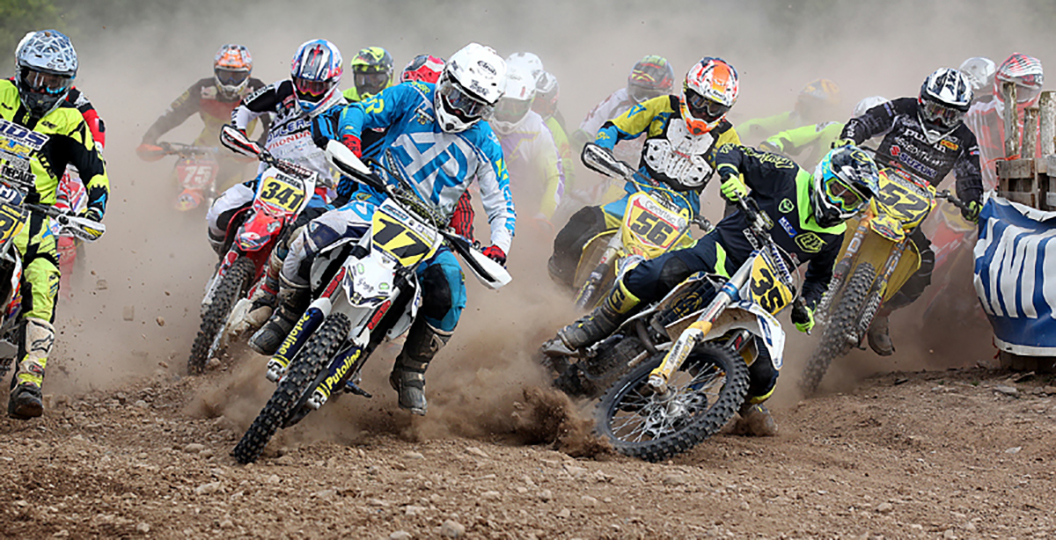 In what has been a truly enthralling Datatag AMCA British Motocross Championship supported by Dunlop, the race for the 2015 titles took another dramatic twist during round 5 held at Shobdon, Herefordshire on Sunday. Going into the event, Richard Cannings had held a 16 point advantage at the top of the MX1 standings ahead of Luke Dean. It’s now though Dean leading the way with a clear 81 points advantage after Cannings crashed in moto two and was then ruled out of the final clash of the day. Taking full advantage, Dean romped to a maximum points haul, joined on the podium by Ed Briscoe and Luke Meredith. Over in MX2 there’s a simply stunning tussle for the title unfolding with Luke Burton and Josh Waterman now locked together on 767 points apiece. At Shobdon the super-fast and stylish Burton took the overall win with Waterman and Lewis King also on the podium for the third consecutive round running.

The very exciting MX2 class were first up at Shobdon and what a supersonic start the series leader Josh Waterman was to make, leading the charge with Lewis King, Jansen Day, Matt Ridgway, Zac Stealey and Dean Swift chasing hard whilst title contender Luke Burton was down in 7th. Burton though was on a major charge and by lap six he had moved up to pass King for 2nd, the race was now well and truly on. For the next three circuits, the rapid FUS AMS KTM pilot reeled Waterman in before making his pass with just two laps remaining. Waterman though refused to be beat and took the fight all the way to the flag , being just over 1 second down on completion and showing his clear frustration at just missing out by banging his KTM’s handlebars as he crossed the line! As King took a lonely 3rd and Day produced another hugely impressive ride in 4th the main battle in moto one was for 5th spot. Ridgway, Stealey, Lewis Meadows and Aled Bellis locked horns in a great tussle which Ridgway eventually won as Adam Cook and Mark Young rounded out the top ten.

In the second MX2 contest, Waterman was again very fast out of the traps with King in 2nd as Burton had it all to do after gating in 13th place. By lap four, Burton had brilliantly managed to recover back to 3rd but with leaders Waterman and King already holding a strong advantage, could he reel them in? From here onwards, Burton took a further six laps to catch King, eventually making his pass on the final circuit, finishing just over 4 seconds behind winner Waterman. Also in the frame this time around were Stealey in 4th, Jack Gardner 5th, Cory McShane 6th, Bradley Wheeler 7th, Bellis 8th, Ryan Jones 9th and Ridgway 10th.

So in the final MX2 clash, there was not only vital Championship points at stake but also the overall verdict on the day as Waterman and Burton went head to head. When that gate dropped yet again Waterman found the speed to lead the charge with Burton in 5th behind Day, King and Gardner. In another quality, frantic affair the leaderboard was continually changing and by lap four Burton was now in 2nd and already chasing down Waterman as King held 3rd, Gardner 4th and Day 5th. As Gardner then crashed when losing the front end of his machine on the stony surface, dropping down to an eventual 23rd place finish in the process, all eyes were on the battle for victory as Burton scorched past Waterman just three laps from home. Desperate to earn that podium top step, Waterman though immediately fought back and in a thrilling, nail biting finish was just yards short of reclaiming the win, great stuff from two very talented riders. For the third time of asking, King had to settle for being the next finisher home with Ryan Jones having a super ride in 4th and just infront of Day, Stealey, Meadows, Swift, Lee Truman and Cook. The battle for the 2015 MX2 title reconvenes on Sunday, August 30th at Hawkstone Park, what a thriller it promises to be!

Buoyed by two podium topping performances, Luke Dean led the opening MX1 clash at Shobdon from start to finish as series leader Richard Cannings passed defending Champion Luke Mellows on lap four and thus chase Dean home. With the top three placings in this moto pretty much sorted, what a scrap there was to be for 4th featuring Andrew Smart, Brandon Benjamin, Ed Briscoe, Clinton Barrs and Sam Smith. Eventually Benjamin was to get that particular verdict with a great effort, but what a moto he endured! Gating in 5th, Brandon then dropped down to 11th before recovering back up the leaderboard. Earlier in the moto, Luke Meredith had also been going well before falling twice and going from an early 4th down to a 8th place finish. Completing the top ten in this opener was John May, having his first Championship outing of the season after recovering from a badly broken arm.

Moto two and Dean grabbed the holeshot but within one lap Cannings was through and the race was now most definitely on! However just one circuit later came that potentially title deciding moment as Cannings then relinquished the advantage when crashing in the whoops section. Dazed and grazed, Cannings remounted right down in 28th spot as Dean regained control at the front before racing onto another vital win. Getting home in 2nd this time around was Mellows with May 3rd after being forced to work very hard to see off a determined Briscoe. With  another solid ride, Benjamin took 5th from Jamie Dobson 6th and Meredith a superb 7th, coming all the way from last in the early stages! After the moto, Cannings received medical attention in the pits before being ruled out of the rest of the meeting, the race for the MX1 title had now been well and truly turned on its head!

Going into the final MX1 clash of the day, whilst Dean appeared just about nailed on for the overall win, the question was now who would join him on the podium. Favourites at this stage were the Park Lane IDS KTM duo of Mellows and Benjamin but when the gate dropped both of the orange pilots encountered indifferent starts and so found themselves well downfield  in the early exchanges. It then got worse for Mellows when he fell and was forced to stop and straighten his KTM’s handlebars. Meanwhile upfront, John May had grabbed the holeshot ahead of Dean, Meredith, Briscoe and Smart. Two laps in and Dean moved into pole position as the unlucky May was then forced out with a broken chain. So it was to be victory and maximum points for Dean as Meredith passed Briscoe for 2nd with Clinton Barrs, Dobson, Smith and Scott Bates also in the mix. Following their earlier problems, Benjamin got home in 9th and Mellows 24th. On the box though it was Briscoe and Meredith joining winner Dean. Not only did the top three pick up their silverware but also some high quality Champagne kindly donated by Tesco of Ludlow, a very nice touch from a major National company!

In the Shobdon support action, James Lane swapped his 250cc two-stroke KTM for a 450F mount before then duly blasting to maximum points win ahead of Richard Tudor and his brother Simon Lane in a combined Championship Non Qualifiers/Experts class. One day license rider Ben Bird also bagged a full house on his way to Seniors success as Taylor Baston topped the Juniors.