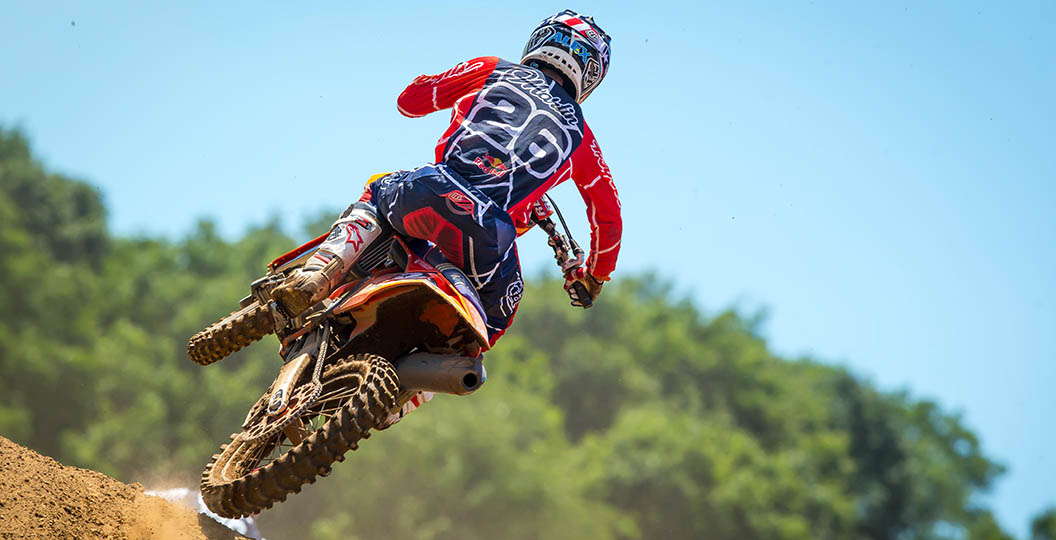 The Lucas Oil Pro Motocross Championship picks back up this weekend over here in the USA with round eight of twelve. Millville, Minnesota is the spot and while one title hunt got less interesting after round seven, one got a hell of a lot more exciting. Let’s empty out our notebooks on things to watch this weekend, yeah?

– First off, a nod to Millville being the best track on the circuit. I know it is very subjective but trust me, I have been around a few times. I also have the most time on Millville with a dirt bike under me but still, the tracks got it all. RedBud gets the hype and it’s very good, don’t get me wrong, but Millville gets the crown as the best circuit. It’s not the best for viewing, but it’s a real challenge. It has got the infamous sand whoops that challenge riders and suspension, it has got huge hills, great dirt and a gnarly start. All the things that great tracks need. RedBud does not have the hills and that hurts it. Millville is so the best track, RedBud tried to copy it with its own sand whoop section! Let the debate end: Millville, Minnesota is the best track on the circuit.

– Last year at Millville, Red Bull KTM’s Marvin Musquin began his charge to the title with great 1-1 rides. It was the start of a late season push that saw him get close to Monster Energy Kawasaki’s Eli Tomac, but ultimately come up a bit short. This year, thanks to Tomac’s bike-induced DNF and then crash-induced ninth at RedBud, he comes in with a small three-point cushion. The pressure has switched to the #25 KTM now as he has got to try and pad his lead. Tomac, who I think has been the better rider for most of this year and I hope you would all agree with me, now has himself a title fight on his hands. His moto-winning streak and overall-winning streak must now seem to be so far in the past.

Here is the thing though; Eli just has to do what he has been doing and he will get the lead back in this title chase. Crashes (Southwick moto two) and bike issues (RedBud moto one) have robbed him of his lead, not speed. For the most part, Eli Tomac has been the better rider than Marvin Musquin this outdoor season and it is that belief he has got to have if he wants to win this. Don’t think about what has been wasted, just be confident in your speed and skills and that should, SHOULD, be enough. One thing for sure is Musquin will be very, very consistent from here on out and Tomac’s got to remember that.

– In the 250MX class, Aaron Plessinger’s lead looks secure with just ten motos left. Two of those are going to be in Indiana, which is a track he is very, very good at. This weekend is Millville where Alex Martin grew up riding and has had great results there before for obvious reasons though. Martin HAS to win this weekend and preferably with a 1-1. He just cannot lose to Plessinger if he wants to win this title; he has got to win both motos and hope AP cannot go 2-2. I think Martin can do that, as he has certainly shown speed and fitness all-year long, but if the two racers leave Martin’s home track with only a few points lost or gained between them, well this thing may be over real soon. Big weekend for Alex Martin and the TLD KTM team.

-Speaking of big weekends, one has to think that JGR Suzuki’s Justin Bogle will show us his moto-winning speed soon, right? It has been an unbelievably tough 2018 for Justin with pre-season injuries, SX injuries and now a comeback to the nationals that has, frankly, shocked me in how uncompetitive it has been. Three holeshots out of four motos and no moto finishes higher than an eighteenth. Do you how hard it is for a rider of Bogle’s skill to holeshot and then get eighteenth? Man, I hope he can figure it out and start getting near the top ten. With his talent and bike/team, he is way better than what he has been showing. It is amazing how easy it is in our sport to fall off the tip of the spear. It was less than twelve months ago that Justin won a 450MX overall. Let’s hope he can get some good showings here shortly.