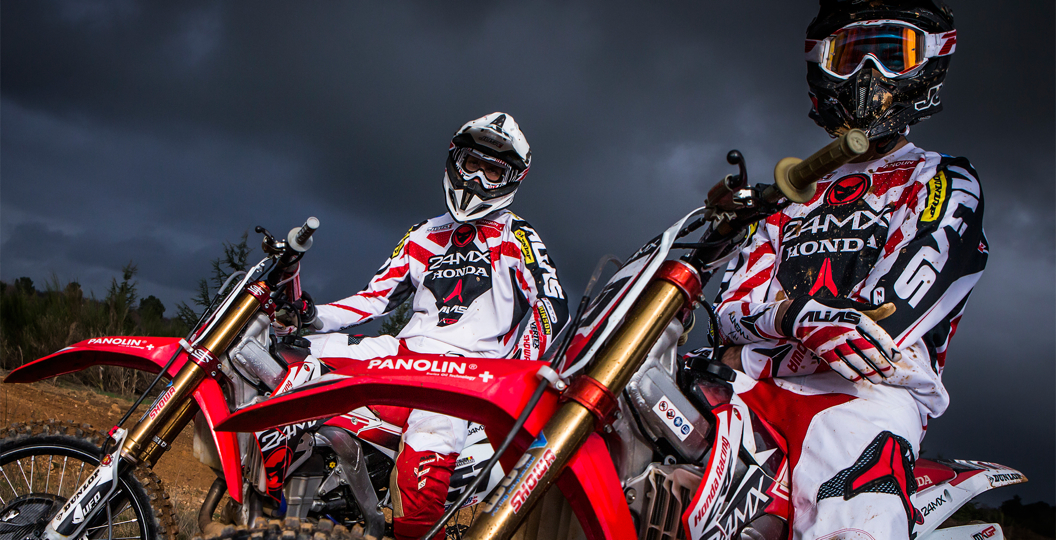 With the 2014 MXGP season done and dusted, we take a few minutes to catch up with Davy Dousselaere, Honda Motor Europe Off-Road Manager, to get the latest on Honda Motor Europe’s plans for next year and the manufacturer’s new rider signings.

What can you tell us about Honda Motor Europe’s rider signings for the 2015 season?

Davy Dousselaere: “I’m very happy with the deals that we have signed for next year. In MXGP we have Filip Bengtsson and Christophe Charlier in the 24MX Honda Racing Team. At JTech Honda we have Vsevolod Brylyakov confirmed for MX2, as we have already announced, and are close to finalising the second seat. Then we have Albie Wilkie, the Honda 150 European Champion, in EMX250, and alongside him we have some options for a second rider but we’ve still to decide.”

What can you say about the new MXGP riders?

Dousselaere: “With Filip I believe we can absolutely have some good results in the sand; even really good results after what he showed this year in Finland with fastest in qualifying. We are confident that if we work with him in the winter he will be even better next year and if we work with him on the physical side then he can stay longer at the front. He became also the Swedish champion, and Sweden is an important market for us.

Then with Christophe it will be his first year on a 450cc bike. From a physical point of view we think he’s more a 450 rider so he could surprise many people next year. It’s also important that we work hard in the winter with him. We will do an extensive testing programme with both riders, and we are confident that they can both show some really good results next year.”

What is the strategy for next year?

Dousselaere: “The team structure is very clear. The focus for 24MX Honda Racing is on the MXGP class with the CRF450R, and for JTech Honda the focus is on MX2 and EMX250 with the CRF250R. In MXGP, 24MX Honda Racing have shown in the past and will continue to show next year that it’s possible to perform really well on a non-factory bike – a standard CRF450R just with race suspension to demonstrate how good the 2015 production model is. For 2015 we have made a major step with the 2015 model and we are confident that with a standard bike with just a few race modifications that everybody can buy, we can perform really well.

This is also the same for the CRF250R. The 2015 model has fewer changes than the 450 but it has an incredible SHOWA SFF-TAC air front fork on it that we will use in race-spec. We are excited to demonstrate with JTech Honda the performance of the bike that is based on the production machine, especially as we are more focused than ever on EMX250 and MX2.”

Why are the MX2 and EMX250 categories so important for Honda?

Dousselaere: “The CRF250R is a very important bike for us next year in MX2 and EMX250. We want to strengthen our position with the CRF250R and we are investing more in nurturing and developing youth talent, such as Albie. As we are also demonstrating with Vsevolod and the second MX2 and EMX250 riders, developing youth talent is very important for us. This is crucial in the decision for JTech Honda to focus on the CRF250R with a four-rider line-up.

We are showing that we are investing in a clear path for new motocross talent, and that with Honda you can go from the Honda 150 European Championship as an 11-14 year-old to EMX250, then up to MX2, and finally into MXGP. This is the central strategy of our commitment to motocross – helping young riders grow with Honda and making the clear possibility for talented riders to get all the way to the top.”

What are the next steps in preparation for next year?

Dousselaere: “With the CRF250R we have made a big step forward with the bike and engine in the period after the MXGP of Belgium, and hopefully we will see the result of this at the Motocross of Nations on 28 September. We’re also looking forward to using the new air suspension next year, as available on the production bike.

We will start testing after the Nations with all our new riders. All Honda riders will also have a group test at the start of next year in Sardinia, so we have everyone from the factory riders to our EMX250 signings all testing together and learning from one another as one big family – a key part of our approach.”

Dousselaere: “I’m looking forward to taking another step forward in 2015 in terms of performance across the EMX250, MX2 and MXGP classes, and I’m confident that we have great bikes in the 2015 CRF450R and CRF250R and the right riders and team structure to be able to achieve this. I’d like to really thank all of the Honda-supported teams and riders for all their efforts, commitment and determination this season as we work ever more closely together. We are building a clear Honda support network and career ladder for new motocross talent that will take some time, but we are all working very well together, we all share the same goal, and I believe we have the right mix of teams and riders in place to build strongly upon our work this season in 2015.”