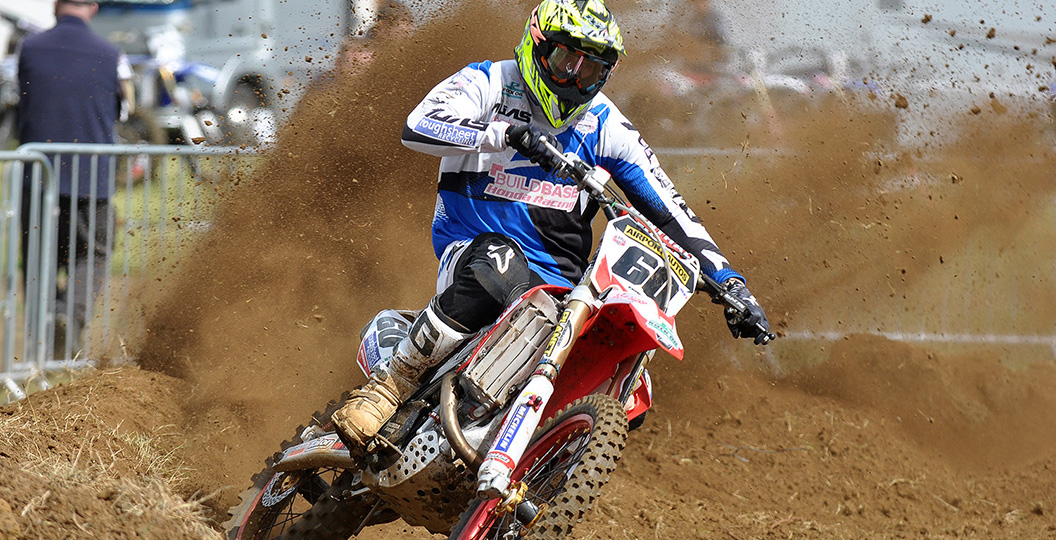 Brad Anderson has been steadily improving throughout the year. The Buildbase Honda has been right around third, fourth and fifth for a lot of the season and is hoping to be on the podium consistently in the coming weeks and in 2015 aboard an MBO Sport Yamaha. We caught up with Anderson to discuss his season, as well as his new team for next year.

MX Vice: Coming into the season Brad, what were you trying to achieve in the Maxxis British Championship and MX Nationals?

Brad Anderson: My expectations were to be top three. After coming back from Australia it was a bit tough for me, but I put my head down and got to where I wanted to be. This year has been tough; I think I sometimes try too hard and end up coming off or doing something stupid – it’s so hard to make that time back up. I’m running third in the championship in the British championship now, so it’s not as bad as I thought, but I still want to be getting better results.

MX Vice: You’ve had a solid year and have been grinding out results all year, which is typical of Brad Anderson and separates you from a lot of riders. Would you agree?

Brad Anderson: Yeah, I always give one hundred and ten percent. I’ve been getting fifths and sixths all year, but it’s not where I want to be, as I said, I want to be top three. I need to try and work on that for next year. I believe I’ve still got it, which is why I want to give it one more big push next year and see what I can get out of it.

MX Vice: Speaking of next year, it looks like you’re going to be switching over to the MBO Sport Yamaha team, where you’ve obviously been before. What is your relationship like with Roy [Emberson]?

Brad Anderson: Roy is a straight-talking guy. If I agree on something, I don’t go back no my word and he is the same. If he says he’s going to get me something, he does. I think that’s what we like about each other. Obviously he has bulldogs and loves pets, and I’ve got a bulldog and stuff. I think our relationship has been going on since I’ve been on his team. I rode for him in 2005, 2006 and 2007. It was a good time, and we got some good results out of it. We haven’t signed anything, but I’ve agreed to ride for the team next year.

MX Vice: Yamaha seem to have a great bike at the moment. Are you excited to get on it and have a change?

Brad Anderson: Yeah, I’ve been with Honda since 2009, and then I had a little switch but went back to Honda. I think it’s good to have a bit of fresh air and a new goal. Roy’s team looks very professional. Obviously Kristian [Whatley] is going to Honda and I’m going to Yamaha, so it’ll be interesting to see how we both do. Honda is professional, but I think it’s good to make a switch.

MX Vice: Will it be the Maxxis British Championship and the MX Nationals that you are looking to ride next year? Obviously Ken Winstanley is coming back as well.

Brad Anderson: We haven’t discussed that, as we’ve just agreed on a ride – all of that needs to be sorted out.