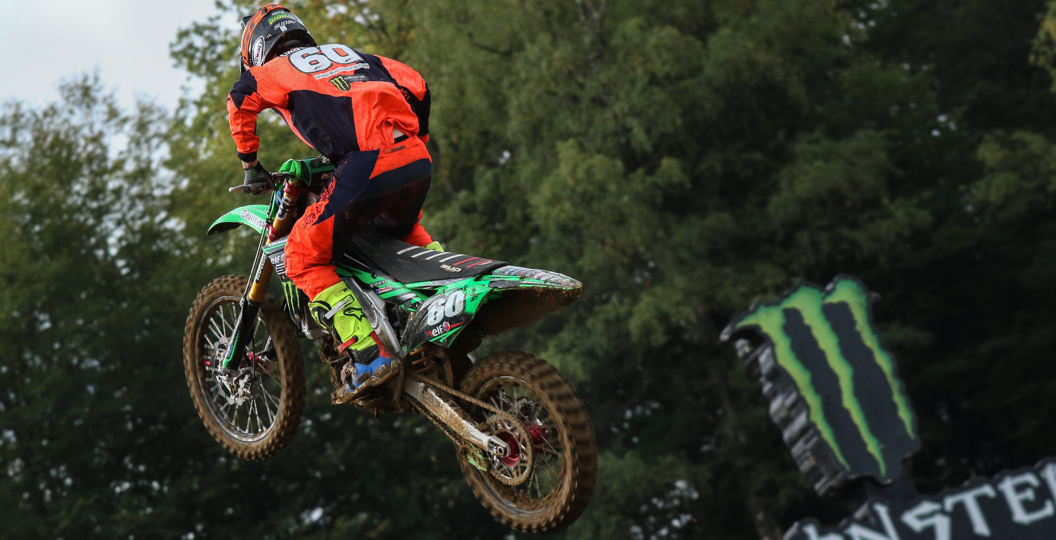 Support classes are typically uninteresting, one may argue, but that is certainly not the case at a round of the FIM Motocross World Championship. The various EMX classes feature some of the brightest talent from around the globe, then there is the WMX category on top of that. The EMX250 and WMX classes are racing alongside the big hitters this weekend, so we’ll use this report to ensure that you are kept up to date.

The first of two qualifying sessions featured the deepest talent pool; Morgan Lesiardo, Tristan Charboneau, Ruben Fernandez, Todd Kellett, Lars van Berkel, Jago Geerts and more were featured. Fernandez, who really came alive during wildcard outings in the MX2 class, set the fastest time, but it was fairly close at the top. A second separated the top eight riders! Just the top fifteen transferred directly from this session to moto one, but a majority of the big hitters slid through. Van Berkel, on the other hand, must face the last-chance qualifier, as he only mustered up the twenty-first fastest time. For full results from this session, just tap the link directly below this text.

Well, the second session was full of interesting titbits. Roan Van De Moosdijk topped the times, which was not surprising at all, but Josh Spinks was just three tenths adrift. How many riders are reaching for their programmes to try and figure out who ‘180’ is? Heavy hitters completed the top five, including James Dunn on a two-stroke. A handful of heavy hitters did not quite make the cut in this group; Simone Zecchina was eighteenth, Dylan Woodcock was twenty-fourth and Dylan Walsh was twenty-sixth. Those three will race in the last-chance qualifier later today.

The first blows have been exchanged in the WMX division! Kiara Fontanesi, who is fourth and five points down on the current series leader, effectively has nothing to lose and laid it all on the line in qualifying at Villars sous Ecot. Fontanesi was more than a second quicker than Courtney Duncan and two seconds faster than Nancy Van De Ven in third. Livia Lancelot, the home favourite, was even further down in fourth, which was somewhat of a surprise. All of the heavy hitters are right where they need to be though and, based on the lap times of those behind them, will be alone out front.

Conditions were fairly normal when the WMX riders set off to tackle their first moto. That soon changed, however, as a massive storm rolled in and turned things into a game of survival. A lot happened, but there was some confusion post-race. Kiara Fontanesi crossed the finish line in first and was interviewed on television as the winner. The results, however, showed that Courtney Duncan won. Why? Duncan was leading with a lap to go, but then got caught up when there was a wall of bikes stranded on one of the trickiest parts of the track.

The results were then counted back a lap in the end, but then further changes were made. Footage was reviewed by the race director and it was deemed that the original results should stand. That is now official and those can be found below.

A muddy circuit often prompts mistakes. Tristan Charboneau was a picture of consistency in the first EMX250 moto though, despite the horrid conditions, as he led every single lap. James Dunn closed in at points, but was no match for Charboneau in the end. Josh Spinks put in another noteworthy ride for fourth, so is undoubtedly popping up on radars across the paddock, whilst some high-profile names failed to even finish. Jago Geerts, Brian Strubhart-Moreau and Josiah Natzke all withdrew around the halfway point.

Morgan Lesiardo had an awful start, as he bobbled right out of the gate, but still claimed thirteenth in the race. That was more than enough for him to claim the EMX250 title for the Monster Energy KRT MX2 team, in what is their final season in the FIM Motocross World Championship.