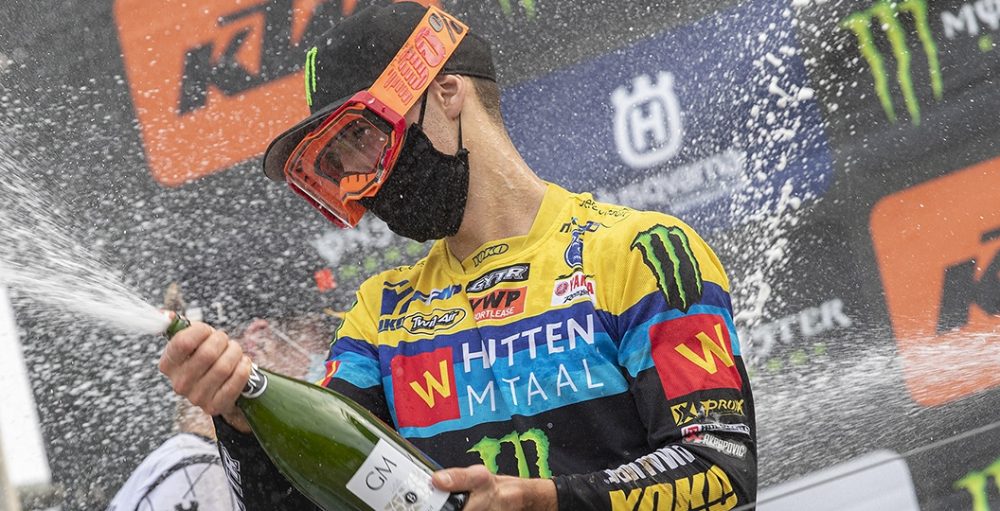 The EMX250 class is undoubtedly one of the exciting parts of the 2020 FIM Motocross World Championship currently, as the title battle between Thibault Benistant and Mattia Guadagnini is coming down to the wire! You may care about that, but not have much interest in the rest of the EMX fraternity, and that is fine! This rapid-fire report will tell you everything that you need to know about what happened in the support classes at the Monster Energy MXGP of Flanders.

– A lot was said about Thibault Benistant entering the Monster Energy MXGP of Flanders – it was thought that he would have the upper hand over Mattia Guadagnini, because he rides for a Dutch squad and is in the sand a lot more than his title rival. Guadagnini actually won the EMX125 overall at this venue in 2018 though, so is not as shabby as one might have presumed. The results obviously prove that pundits were right to rate Benistant so highly though.

– EMX250 riders have tackled Lommel six times now, yet there has not been a repeat victor once in that time. Brian Bogers, Lars van Berkel, Bas Vaessen, Mel Pocock and Roan Van De Moosdijk have had their share of success in the class at Lommel. That also means that Benistant is just the second guy not from The Netherlands to claim an EMX250 win in the sand. Who would have thought? There is not going to be an opportunity for him to repeat that win, as he is off to MX2 in 2021!

– Mattia Guadagnini could have gained ground on his title rival, yet a mistake on the opening lap of moto two left him facing a mountainous task. Guadagnini did put on an impressive charge, to his credit, and reeled off the fastest laps of the race around the halfway mark. Another mistake scuppered his chances at stopping Benistant and he looked dejected from that point. A pair of runner-up finishes is great, but just not what he needed. It seems unlikely that he will take the crown now.

– Gianluca Facchetti, the second rider on Hutten Metaal Yamaha Racing, crashed on the first lap of both motos and then later withdrew. This is the third season in succession that he has competed in EMX250, making him a veteran of sorts, yet things are not quite coming together. Still, he is on for his best result in the category. The problem is that is just on the cusp of the top ten. There is no word on what Hutten Metaal will do for 2021 just yet.

– Hakon Fredriksen was a factor through the day, even though he did not feature in the race for the win. Fredriksen was effectively last in moto two (officially thirtieth at the end of lap one) and charged all of the way back to fourth in what was an incredible ride that will go unnoticed. That should not really be much of a surprise though – he was ninth in a moto at the Motocross of Nations a year ago! Watch out for him on Tuesday.

– The RFME GASGAS Junior team has had a strong presence in EMX125 this season, hence why it is quite a surprise that they only just took their first win with Guillem Farres. Farres actually mirrored the moto scores that his teammate, David Braceras, had, but won by virtue of a better second-moto score. Farres now has a shot at fourth in the championship, whilst his teammate has jumped up to second now. The fight for the championship is effectively over now though.

– Andrea Bonacorsi was not very comfortable in the bottomless sand of Lommel and had a horrific time of it in qualifying. Bonacorsi rebounded by taking sixth on the day and now leads the championship by forty-four points. The EMX125 riders have two rounds left, so one more than the EMX250 guys, but he should be able to hold onto that advantage. It is a very chunky gap with just one hundred points up for grabs now.

Thibault Benistant (P1 in EMX250): “I am really happy to win both races today. It was my goal. I was never really thinking about the championship though – I am just taking it race-by-race to give my best every time. I am really happy to be on top of the box. I feel really good going into the last round: I know I have got the speed and physical fitness to do the same again!”

Mattia Guadagnini (P2 in EMX250): “It was not so good. I had good speed, but in the first race I had a bad start and made my way to the front. I was closing down the gap and I made a mistake, so I took second. I had a great start in the second race, took the holeshot and then made a little mistake. I tried to start as soon as possible and made my way to second position again, and I was a little bit faster. I had a little problem with the goggles and another crash. I tried my best and finished with two second places, but it was not what I was hoping for today.”

Guillem Farres (P1 in EMX125): “Right now I still cannot believe it, but we did it. I struggled a little bit in the first race, because I did not get the start that I wanted and after I fought with Haakon [Osterhagen]. In the second race I was able to take a better start – I was second and managed to pass Haakon. I went for the first position and I was first for all the whole race. I’m really happy about that. I’m feeling that Im being more and more consistent race-by-race and also more confident. It is strange that Spanish guys are together on the podium here in Lommel.”

– Major changes have been made to the Lommel circuit for the Monster Energy MXGP of Flanders. There are some new turns, the start straight has been moved and there is a section of twelve waves that will strike fear into the hearts of most guys by the end of the weekend. It is positive to see a new layout – the good news does not stop there though. It seems as though significant changes will be made before each round of the Lommel triple header. That will spice things up a fair bit!

– The new first turn at Lommel is much fairer than the previous one, as guys are going to be able to take the holeshot from anywhere around the middle of the starting line. The ninety-degree turn has actually caused first-turn crashes in every EMX moto today, as everyone pushes wide and those on the outside just have nowhere to go. That is something to look out for tomorrow – carnage on lap one would make the title fights even juicier.

– Belgium and The Netherlands, where most of the Grand Prix contingent stay, are being placed in partial lockdowns, which means that no restaurants or bars can be open at any point. Will this have an impact on the next two Grands Prix at Lommel? It sounds as though Wednesday will be fine. There are a couple of rumours floating around about next weekend’s event, but then those same people yelled that Spain would not be able to run. Best advice is to keep calm, carry on enjoying Lommel and hope for the best.

– The schedule a week from now will be lighter than it was today. The YZ bLU cRU class was going to sit alongside EMX125 action on that day, but that event was cancelled for obvious reasons. Extending the EMX250 stint at Lommel by another round would have caused outrage, as doing that could change the outcome of the title fight, so there will be a single class on October 24. It will be all about EMX125 guys next weekend! That will be their final round.