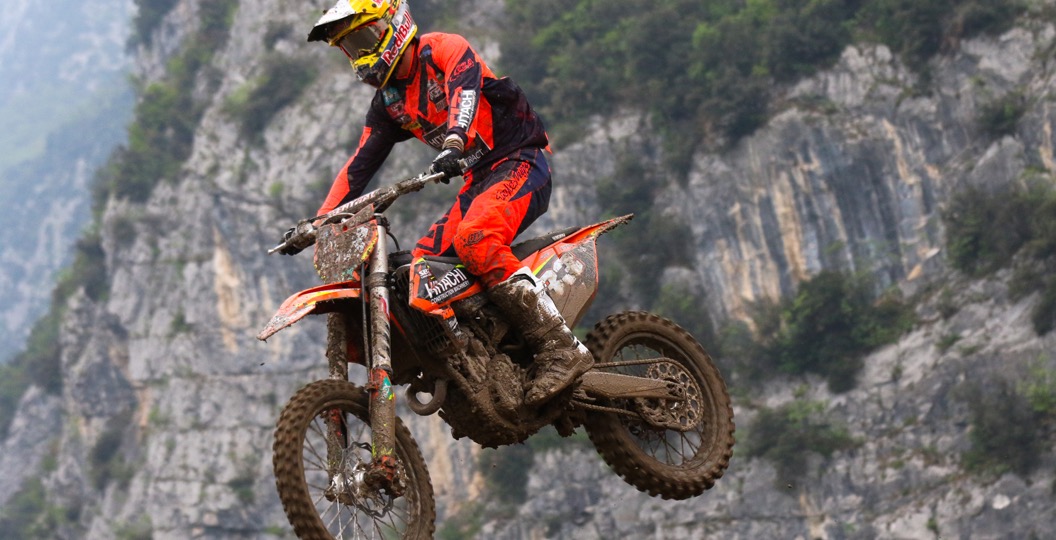 Support classes are typically uninteresting, to be brutally honest. That is certainly not the case at a round of the FIM Motocross World Championship, however, as the various EMX classes feature some of the brightest talent from around the globe! The EMX250 division will fire into life this weekend, alongside the WMX class, so we’ll use this report to ensure that you are up to date.

The first of two EMX250 qualifying sessions was undoubtedly the most stacked, as a majority of the favourites tackled the fresh circuit. It was a surprise quantity, however, who topped the times, as Simone Furlotti romped to a 1:46.044. He was tenth in the MX2 qualifying race here a year ago, so perhaps it is not too shocking? It is most intriguing that Furlotti and Brad Todd, who was the next-fastest rider, recorded their lap times earlier than those who also qualified. Perhaps the track conditions at that point worked in their favour?

There were not as many stories in the second and final EMX250 qualifying session. Stephen Rubini, who has dropped down from MX2, and Jago Geerts were the riders who most focussed on. Karlis Sabulis, who had a career-best moto finish of fifth at Teutschenthal last year, topped the times with relative ease. The top eighteen from each session advance directly to the motos, then the rest must partake in the last chance qualifying race at midday.

Italian fans rejoice! Kiara Fontanesi, who currently sits fifth in the WMX class, gave her fans something to cheer about in the qualifying session. First she topped free practice by three tenths, then romped to pole position by more than a second. Courtney Duncan, the current series leader, was relatively close, but then there was a significant gap to the rest of the field. Fontanesi set her fastest time on the first lap, when conditions were almost identical to the final EMX250 session. Where would her lap have put her in that session? Thirty-seventh!

The EMX250 LCQ went exactly as planned, as a majority of the riders who were expected to prevail did. Marshal Weltin, racing his first event from beneath the Bud Racing Kawasaki awning, just squeezed into the main programme. Rene De Jong stole the headlines though, as he charged from thirtieth to third in the thirteen-lap race and recorded a lap time that was five-seconds faster than anyone else on the track! The Dutchman crossed the line just five seconds down on Davide Cislaghi, the eventual winner.

Courtney Duncan stole the lead from Nancy Van De Ven on the first lap of the opening WMX encounter, so most presumed that the race for the win was over at that point. Duncan threw it away whilst alone out front, however, and was lucky to escape uninjured. Kiara Fontanesi took the lead at that point, much to the delight of the crowd, and rode to a clear victory. Duncan made a couple of passes to salvage a runner-up finish, but was ten seconds down on her title rival at the end.

The first of two EMX250 motos was all about Simone Furlotti. The Italian, who romped to the fastest time in qualifying, took the early lead and was unchallenged from that point on. The results that are online are not actually correct, however, as he only won by twenty-two seconds. Karlis Sabulis finished second, following a tussle in the final turn with Alberto Forato. Miro Sihvonen, in fourth, was thirty-one seconds back, rather than two minute and twenty-three seconds back like some of the results indicate. Ken Bengtson was listen as third online, but actually finished eighth.

What else happened? Brad Todd crashed and crossed the line in fifteenth, which was just two spots ahead of Mel Pocock. Pocock crashed twice throughout the race, so should have more to give in the second and final moto. Why is Marshal Weltin not listed on any of the results? The American was disqualified for course cutting.

The WMX riders kicked off proceedings on the final day at the MXGP of Trentino and, unsurprisingly, the way that the race played out was quite similar to the previous day. Nancy Van De Ven took the holeshot again and actually held onto the lead for four laps this time around. Courtney Duncan, who started third, pounced at that point and then begun to throw the hammer down. Another mistake caused her to forfeit the lead though, so she dropped back to fourth and handed the top spot back to Van De Ven.

It seemed the race for the win was over that point, but then she made her own mistake with two to go and let Livia Lancelot slip into first. Lancelot managed to hold onto it, but was not quite in contention for the overall after a mediocre first moto. Kiara Fontanesi stood atop the podium in front of her home fans, after steadily progressing to second in moto two, and was joined on the box by Courtney Duncan (2-3) and Livia Lancelot (5-1).

The EMX250 riders completed their second moto at the convenient time of midday. Morgan Lesiardo controlled proceedings this time around, as he logged some consistent times to lead every lap and eventually cross the line eight seconds up on Miro Sihvonen. Simone Furlotti, the first-moto winner, moved from sixth to third during the sixteen-lap race, but also posted the fastest lap. A first-turn crash claimed Mel Pocock, Brad Todd and Jed Beaton, hence why their results were lacklustre. Tristan Charboneau dropped out with suspected bike issues.