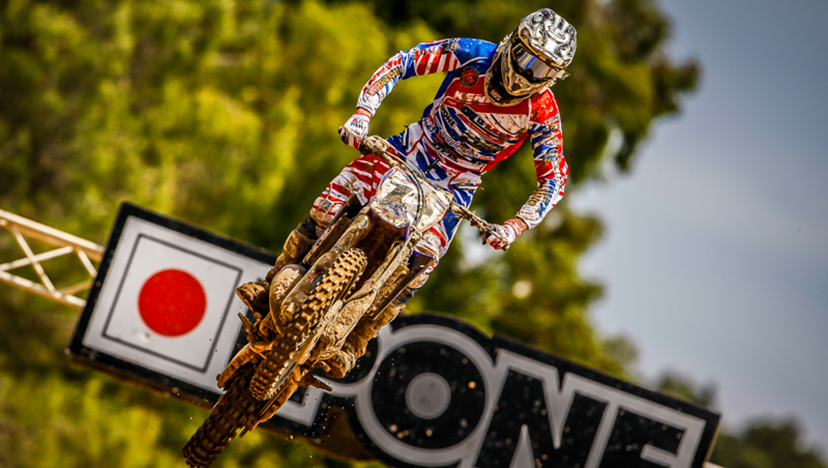 TALAVERA DE LA REINA (Spain), 11 May 2014 – The old school track of Talevera de la Reina which had been lathered with water in order to keep the dust down in the sizzling hot temperatures, proved to be a challenge for the second rounds of the European Championships EMX250 and EMX300 classes. Proving they’ve got a solid base on traditional style tracks, Bud Racing Kawasaki’s Sullivan Jaulin andGL12 Racing’s Lewis Gregory had their lines dialed to win their first European Championship rounds of their careers.

Henry Jacobi, who at one stage of the race had a gap of five seconds over the Brits race one winner Steven Clarke and red plate holder Ben Watson, soon began to come undone dropping back to fourth with only two laps to go. Meanwhile the battle of the Brits raged on as the duo Clarke and Sterry continued to bang bars while another Brit in the form of Wilvo Forkrent KTM’s Adam Sterry was laying the pressure on German Jacobi.

While Jaulin brought home his first win of the season to win round two of the European Championship EMX250 on his debut appearance, it was a nail biting final lap for the four that followed. Clarke held on for second only marginally ahead of his fellow countryman Watson, to tie with Jaulin for the win but was forced to be happy with second overall for the round due to Jaulin having the best result in the second race. Meanwhile KTM Sarholz’ Henry Jacobi got the job done for fourth only just fending off a charging Wilvo Forkrent KTM’s Adam Sterry who settled for fifth which in combination with his seventh place yesterday landed him on the third step of the podium.

Local talent Jorge Zaragoza who took a hard fought third place in race one yesterday, struggled to find traction out on the slippery hills here in his homeland of Spain. A few spills and a lot of mistakes saw the likeable Spaniard struggle his way to a nineteenth place finish.

Jaulin mentioned before taking to the top step of the podium, “It is not so easy in this heat but it was ok for me. Yeah, I was tired in the heat at the end of the race, but I got a good start and took the holeshot and pulled a gap from eight seconds so it was ok. I am happy and I will finish out the rest of the European Championship with Bud Racing Kawasaki”.

The sweet smell of pre-mixed smoke filled the air as the EMX300 gate got set to drop and when it did it was Team Maddii Racing’s Marco Maddii who got off to a ripper of a start taking the holeshot and running away with his first race win of the season. Meanwhile, the red plate holder TM Racing Team’s Samuele Bernardini had a better grip on the track today, setting the fastest lap time of the race on lap five and redeeming himself after yesterdays errors to take second ahead of race one winner GL12 Racing’s Lewis Gregory.

Chasing the top three CEC I.S Racing’s Toms Macuks found a way around Wilvo Forkrent KTM’s Kenny Vandueren around mid race and started reeling in Gregory for third. Upon approach with two laps to go, the Latvian Macuks buried the front end in a sticky section while trying to pass Gregory and went down. With his chances of a top three more or less out the window, he decided to ride easy for the remainder of the race to take home an easy fourth ahead of Vandueren.

Wrapped with his career best finish, Gregory said, “I’m over the moon, I’m a little bit lost for words a little bit. Yesterday I got out of the gate good and just rode good and today I knew I just had to be mistake free and I stood a chance. I’m just so happy right now, I want to thank all my sponsors and every one that helps me”