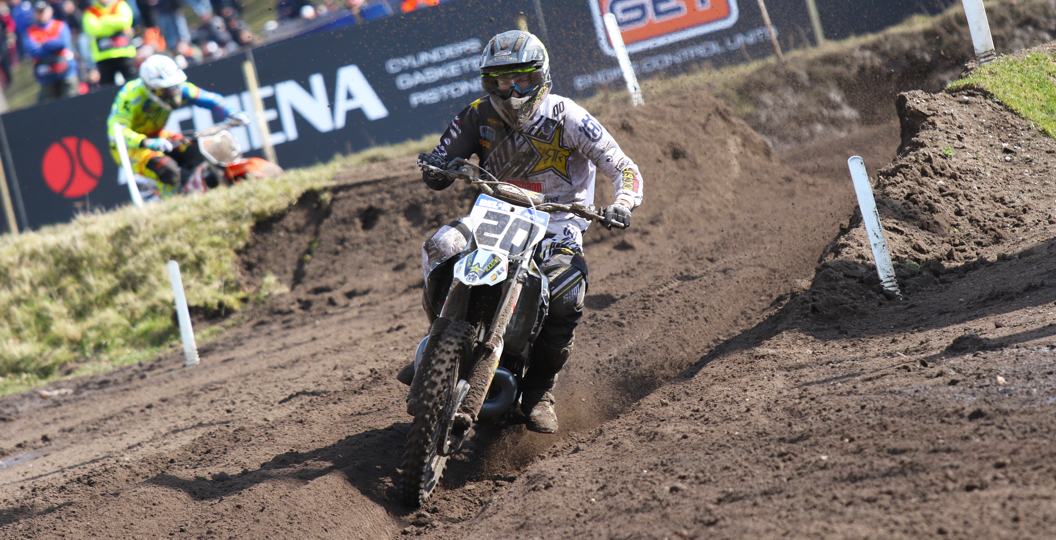 MXGP and MX2 aren’t the only classes taking to the track this weekend, as EMX250, EMX300 and WMX are filling the supporting role. We’ll be updating this page regularly, with reports from their motos.

The EMX300 riders were the first to tackle the power-sapping sand in anger, as their opening moto took off at midday. Mike Kras, who dominated here one year ago, was undeniably the favourite coming in, so it wasn’t exactly surprising when he took off early on. Yentel Martens, who was cruelly robbed of the two-stroke title last season, was coming though; he hunted down Kras and made a pass stick. The Belgian quickly set about establishing an advantage at the front, but a mistake as he came back onto the start straight cost him a position.

Although he gave it a go, Martens couldn’t make up for the time lost and ultimately had to settle for second. Kras took the win, with Mike Vanderstraeten rounding out the top three. Lewis Gregory held third for a long time, but dropped back to fourth in the closing stages and did more than enough to manage the gap over Antonio Utrilla in fifth. Brad Anderson was a lonely sixth, one minute and seven seconds adrift of the leader.

This one was all about Conrad Mewse from start to finish. Mewse, who admits that he has struggled with starts the past two years, rocketed out the gate and had a couple of bike lengths on his competition entering turn one. The Rockstar Energy Husqvarna Factory Racing rider led every lap to win. Hunter Lawrence, an Australian import, was the next to cross the line and looked good, despite his limited experience in Dutch sand. That has to bode well for the future, right? Thomas Kjer Olsen, Even Heibye, Anton Lundgren, Kevin Wouts, Darian Sanayei (who made good progress) and Nick Kouwenberg rounded out the top eight.

All eyes were on Courtney Duncan entering the first moto of the women’s race, as most were keen to see how the New Zealander would adapt to the sand. The answer to that is pretty well; she took the early lead, despite not taking the holeshot. A nasty crash at the halfway mark cost her a handful of positions, however, so she ended up crossing the line in fourth. Nancy Van De Ven took advantage of the fall and eventually won by sixteen seconds over Kiara Fontanesi. Livia Lancelot finished third.

The second and final EMX300 moto was the first race on Monday and took place under cloudy skies, but fortunately they just about managed to avoid the rain. Yentel Martens was much more refined in this one, as he shot out to the early lead and was almost faultless whilst on his way to the win. Mike Kras crashed very early on and came all the way back to sixth, which was just enough for third overall. Lewis Gregory was second in this one, twenty-eight seconds adrift, and also occupied the same spot in the overall classification. Patrick Vos rounded out the top three in the moto. It is worth noting that Brad Anderson withdrew whilst running fourth with a suspected bike issue.

Even Heibye took the holeshot in the second EMX250 moto, but Conrad Mewse broke into the top spot within two laps. Mewse looked set to runaway with it, but Hunter Lawrence charged through the field after starting fifth and took the lead on lap six. The Australian’s time up front was short-lived, however, as a mistake a lap later dropped him back to third. Even Heibye took the lead at that point, but Conrad hunted him down again and eventually took the position with three to go. Three seconds was his advantage when he crossed the line, which was more than enough to hand him the overall victory and red plate.

Courtney Duncan was seemingly keen to not make the same mistake as she did in moto one, as she got out front early on in the second WMX encounter and never looked back. The New Zealander crossed the line twenty-five seconds clear of her closest rival, Livia Lancelot. Nancy Van De Ven was third, after swapping positions with Lancelot and Verstappen a few times, which was good enough to hand her the overall at her home GP! Duncan lost out by two points, but will have the red plate again at round three in May.