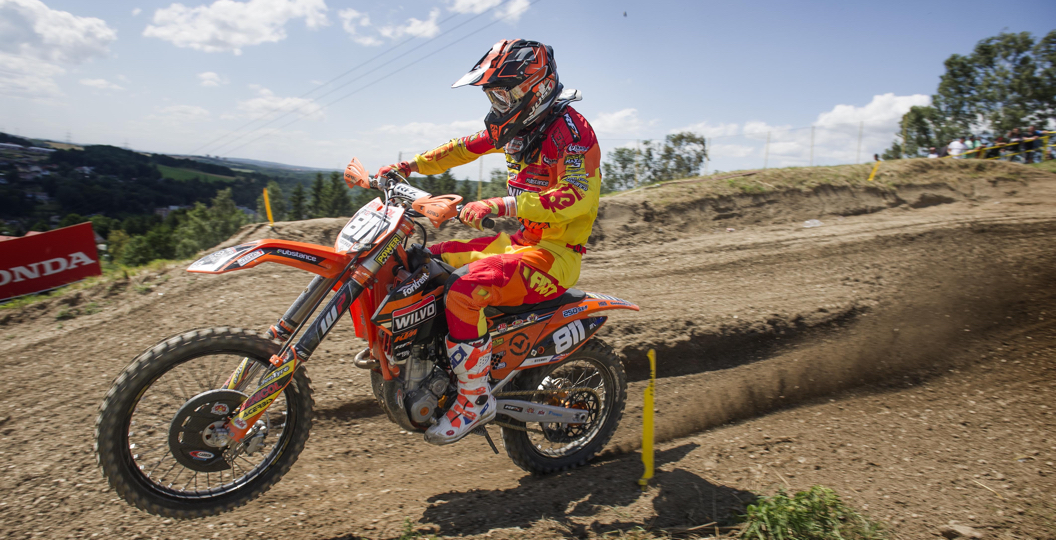 You are in for a treat this weekend if you believe in that sentiment, as every EMX class will be taking to the track across the two days. Breaks? Who needs them?

The EMX250 class is arguably the most successful and important class, as it acts as an important stepping stone to the MX2 class and is often where factory teams pluck their next rising star from. Lommel will serve as the penultimate round for those riders (as it will for EMX150 and EMX125 also), so it is all to play for! Nick Kouwenberg, who has been a model of consistency thus far, sits atop the standings with a fifteen-point advantage over Damon Graulus. Sterry is thirty-three back in third, with Desprey a further five back.

If this were a normal series, I would say that all of those riders are pretty set in their positions. There have been so many twists and turns, however, so I wouldn’t be surprised if someone like Sterry is thrown a lifeline this weekend. When the series has visited the sand this year; Sterry, Kouwenberg and Desprey have proven to be up to scratch in the soft stuff and consequently enter this weekend as the most likely podium candidates.

Desprey, on the other hand, has floundered and for that reason I would rule him out of the title chase. You can rule Sterry out too, unless he sweeps both motos this weekend – that isn’t unrealistic. I would pick the Wilvo Forkrent KTM rider as my favourite for the win, actually.

Brian Hsu and Bas Vaessen could enter the fray and steal points from the contenders, as they have really come on in recent weeks. Hsu especially has found his feet on the four-stroke. Olsen, van Berkel, Ostlund and Bengtsson should also be duking it out for a spot inside of the top five. It is also worth noting that, despite what the original press release stated, Steven Clarke is not going to take part in any of the remaining EMX250 rounds.

It has been a long time, almost two months, since we last saw (or heard) forty 125 riders ripping around an MXGP track. The EMX125 class will return this weekend, however, for another chapter of the thrilling title fight that sees the top four separated by just fourteen points. Maxime Renaux, Josiah Natzke and Jorge Prado are right in the thick of the championship hunt, and there is really no telling who will thrive as we enter the sandy terrain of Belgium. None of the three strike us as a ‘sand specialist’. You can be sure that both Natzke and Prado have put in a lot of time training with Everts though, so expect them to be ready.

It seems that Conrad Mewse, who is under the watchful eye of Everts also, has transformed over the break after working with Jamie Dobb. He was certainly much improved at the Junior World Championship and is also stronger in the sand, so it’ll be interesting to see what he has to offer this weekend. Miro Sihvonen was a revelation when the class last raced in the sand at Valkenswaard, also, so could also be one to watch as we enter the penultimate round.

With his Czech win, Albin Larsen has pulled to within three points of Emil Weckman in the points. However, the Swede stated that he wasn’t exactly looking forward to Lommel; whether he will be able to maintain this challenge is unknown. The championship hasn’t actually visited a sand track yet, so who will thrive and falter is hard to say. Jack Bintcliffe is in need of a good weekend, as he is just eight points down in the championship. If he could just pull a little closer, his fate will be in his hands when the series enters the finale.

Undoubtedly the most predictable of the four EMX classes, EMX300 will enter its final round this weekend. There is a title up for grabs, but something ridiculous would have to happen for Marco Maddii to not clinch it. He has a thirty-nine-point lead over Matt Moffat, who effectively sits second with Martens out, so could just bring it home with two sensible motos. It’ll be interesting to see what Moffat can do this weekend, actually, as he is looking to end the series with a bang.

In order to win he would have to go through Brad Anderson, however, who will once again fill a wildcard berth for the GL12 Racing squad. Will he be able to replicate his Czech form in the deep, energy-sapping sand? Time will tell, but I wouldn’t be surprised if some Belgians show up for one round only and impress.