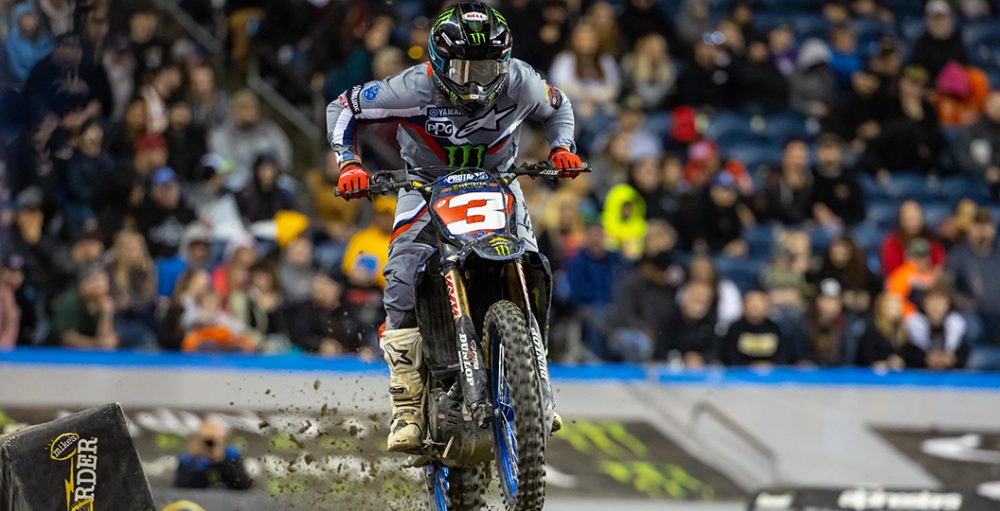 Eli Tomac continues to march towards his second premier-class title in the Monster Energy Supercross series! Tomac dominated proceedings in Seattle, the twelfth stop of the current term, and clinched the forty-fourth victory of his career. The impressive win helped him extended his championship lead to 54 points, so everything seems to be trending in one direction for the Monster Energy Star Racing Yamaha pilot. It’s extremely hard to pinpoint a weakness in his programme.

Tomac sat down and discussed his evening at Lumen Field with the press immediately following the event. There were countless talking points in the media event; championship management, breaking records, dominant rides, big lines and the upcoming break were tackled. Tomac’s words from the post-race press conference have been transcribed below, for those who would rather read than watch or listen. Enjoy!

Press Conference: You have got a lead in the championship, so there is a lot of talk about management and how you approach it. It does not seem like you are buying into that at all. Is that true?

Eli Tomac: Yeah, I am still looking for wins. Before tonight, was there six [rounds] left or whatever we are at? There is just too many to pump the brakes at. When you do that a lot of times then something happens and you get out of rhythm. I am just trying to keep what we have going on going.

This is how you would like to do it, right? Get out start, get out front and put together a perfect race like that. These ones are obviously rare, so are they extra special?

Yeah, it was off to an awesome start. These shelfs off the start are a little bit funky and I was terrible the last time that we had it, but this time I was good with going off the shelf there. We were clicking to that third gear. I got the holeshot and put the big sprint on early. The track was really nice early on, but then it turned into a beast. There was like two different tracks tonight, I thought, between the first half to the last half.

I am sure that you are sick of talking about this: You had a one-year deal with Star Racing and an option. If you win three more then you are one behind Ricky [Carmichael]. How much does that play into your decision to come back again, if at all?

No, it does not. It will be whether or not I still want to keep doing it. I have told myself that as long as I enjoy it and have a chance at winning then I will keep going. That is all I tell myself! That is not going to matter, whether I am one away from RC or whatever from James [Stewart].

Is there any kind of timeline on that decision?

I have no idea right now. It will come later on. I do not know when that is!

This is your fifth win in a row and one of the best sequences in your supercross career. Thinking back to 2017, when you were on a tear and winning races at will, where would you rate your comfort bike on the bike now compared to where you were back then?

Well, when you can string them together like this then I would say that it is a similar feeling. Things just go your way and everything feels right. I feel good on the bike and the motorcycle – that is the way that it has been. I have bene able to execute good starts and get to the front of the pack that way. When you can do that many in a row then it is just a good feeling.

I know that you squashed the management question, by pushing the way that you did. When you have a ten to fifteen-second lead, I know that pushing it and being in that zone is important. Quadding out of that corner though… Do you have to do that? Is it something you want to do just to stay in your rhythm?

Yeah, I was trying to do it as much as I could. There were times when I missed it though. That was the benefit of having a gap. I was able to bail to a double-double line or go on and off. I did the quad a handful of times in the last half [of the race]. I was more thankful to have that gap for the whoops – they were gnarly. I was getting them good in the first half, but then they were just cupped out and crazy in the second half. That line was cool. We have not had a big line out of a turn like that in a while.

You guys have been on this thing for twelve weeks. The work will not stop, but will you have a chance to take a breather next weekend or will you work straight through it?

Yeah, a weekend off is nice at this point. Travel is what it is. I am not doing anything special, other than not travelling. That is a win.