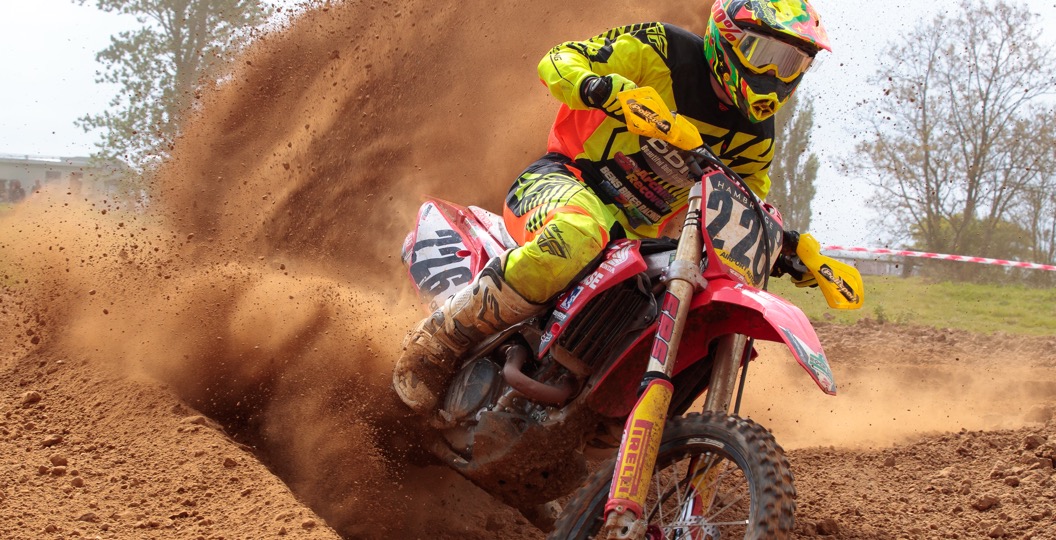 Dust. I think that’s a fair way to summarise my day trackside, snapping photographs of all of you whilst you spat dust and dirt up at me. Thanks. On a more serious note, there were a number of factors pitted against the committee last weekend. Yet, through the thick and thin, EKSSC still pulled off a meeting to rival the season openers. Altering gradients, cambered corners and a nice variety of jumps left riders eager to tackle the circuit. Despite the dust there is definitely an enjoyable flow to the circuit, which resonates with rider and spectator alike. With the introductions out of the way, let’s talk racing!

If you have read any of the previous reports or seen the Open/AMX class perform this season, it will come as no surprise to you that Troy Beck once again clinched the overall. This petite little ginger fellow clearly has a set of big balls on him. Maybe that’s why he is never sat down on his Honda? Beck soared around the circuit like the majestic eagle he is, pulling off in first at the end of every moto and comfortably assuming the top step of the podium at day’s end.

What about Ben Lambert-Williams? He’s not a bird, not a plane, just an absolute tank riding a KX450F. I’m glad I’m not the guy he decided to fall on in the first moto! Buried down the pack in moto one, Lambert-Williams then charged like a rhino through the field and moved up from thirteenth to second! The pace was there, all he needed to do was get the start to position himself within striking distance of Beck.

Race two gave Lambert-Williams the opportunity to mount an attack, but ‘226’ responded with lap times that no rider could rival. Laying down a 1:34.684, Beck stretched out a lead over Lambert-Williams of just under twenty seconds in the second moto. Ben settled for a trio of second place finishes along with second overall, remaining consistent may be vital in his championship hunt come the end of the 2017 season.

By now you surely must know what to expect from the Clubman class? Loving and caring guys, all riding sensibly and with due diligence, hence why a few of them decided to have a cuddle on the ground in the first corner of the first moto. Splendid group of lads. The most splendid lad of them all? David Cecy!

Adding to his win list with a further two moto victories and a second, Cecy once again left with the overall and the MBO Holeshot Award. The ‘550’ machine of Lee White snatched both the win in moto one and second overall (not quite sure how he ended up with his goggles stuck in his chain guide in one moto though).

Danny King polished off the podium, going 4-2-3 ahead of a stacked line-up. King hung with the big boys at the front, yet was unable to get the job done. Expect to see this guy contending for a moto victory at some point in the future, as his unorthodox style is definitely capable of producing results in the Clubman class. Watch out Cecy, King is coming for your crown!

Seniors? Believe me, the class that sounds like a category for OAPs is in reality quite the opposite! A group full of adolescents preparing for their venture into the adult classes in their interim year, without exception produces a spectacle at every meeting. Ebby Elliot stole the limelight once again, grabbing the MBO holeshot award and three-out-of-three wins with ease. The KX250F rider undoubtedly has bucket loads of finesse, as he kept composed throughout the motos to storm to the top step of the podium.

Daniel Sultana and Jake Swann each took a second and a third in the opening two motos, leaving the remaining steps of the podium undecided, as either rider had the potential to claim the runner-up prize. However, the ‘93’ machine of Sultana roared past the chequered flag in the final moto ahead of the (promiscuously numbered) ‘69’ machine of Jake Swann, gifting him second overall whilst Jake seized third.

Henry Rogers looked more than promising in the Seniors class before going down hard over the triple, witnessing it first-hand I honestly can say it was a nasty one! We all wish Henry a speedy recovery here at EKSSC. Get well soon, mate!

The Big Wheel class… another clean sweep. Delivering an ‘Odds’ verdict as Mason easily rang his two-stroke up and down the hills of Iden to victory! Behind him Jack Dade showed his aggression, remorselessly charging to the chequered flag in each moto for 3-2-2 for second overall. Benjamin Causer had a rough start in moto one, having to battle through the pack to secure fourth. Accompanied by two third place finishes in the final motos, Causer was able to salvage third overall. However, having spoken to him at the close of play, I know he expects better performances in the future and we look forward to seeing them!

Finally! Bassett made it stick! A clean sweep for the Holeshot2Win rider and deservedly so! The Small Wheel class experienced decapitation, as ‘34’ headed the pack and left his closest rivals in every moto to pilfer the overall uncontested. Jack Anderson, this week’s MBO holeshot award winner, rode his way on to the second podium step, proving the value of a consistent day of finishing in the top three. The final step was claimed by none other than Aiden Monks. After a mixed bag of results Monks was able to accumulate enough points at Iden to plant himself firmly in the top three with Bassett and Anderson, at the expense of riders such as Harrison Borg and Jake Cappa.

The Juniors were next to brave the flowing hills and dust plains that all riders found themselves subject to. Some admirable exhibitions from the class in its entirety, however, as with all racing, only one rider could walk away triumphant. Riley Ingram championed the class, despite all of the podium finishers claiming a moto win. Ingram scored 127 points, whilst Ashley John-Matthews clocked 125 and Harrison Bowles 123. Fiercely contested, each moto delivered an outcome distinguishable from the last, it was merely a matter of consistency at the head of the pack that allowed ‘121’ to emerge victorious at the close of play.

The little guys then lined up in front of the gates. Aboard their 50cc machines, the auto riders focused their sights on the first corner as they snapped their throttles and charged for the holeshot. Jacob Francis cleaned up the class with a triad of moto wins, permitting Francis to herald himself as the ‘Tiniest Champion of Iden!’ Archie Edwards came home second overall following three consecutive second-place finishes, whilst Oliver Easdown rounded off the auto podium with a trio of thirds.

Check out statements from some of the riders below! They explain their experiences at the track first hand, offering an interesting insight into the mind of an EKSSC member at Iden.

“The track was very sketchy in places. I rode a little too cautious, but I’m happy with my result. I was beaten by the better man this week. It was a shame the water bowser broke on Saturday, because it is a good track. It would have created some good lines and the racing would have been a little better. Well done to the committee for the effort put in on Sunday to keep racing going ahead,” said Ben Lambert-Williams (Open class).

“The track was enjoyable, but it could have done with being prepped a little better. But on the whole it was pretty awesome; I felt good on the bike and I think my results reflect that. I’m looking forward to the next meet,” said Troy Beck (Open class).

“The toughest conditions I’ve ridden in a while, but the key to doing well was simply staying on the bike. It was my first holeshot in a while and my first on the 85. The gate dropped, I saw my gap and I took it without letting off the gas! Having moved up to second in the championship this weekend, I’m looking forward to progressing and trying to see if I can put some pressure on Josh [Bassett] for the top spot,” said Jack Anderson (Small Wheels).

Jump on board with Ben Lambert-Williams in the final Open/AMX moto at Iden Motocross track. Lambert-Williams shows us what it takes to snatch a podium place in EKSSC’s premier class aboard his KX450F!

This week’s ‘MX Vice Rider of the Meeting’ award goes to Jamie Thorpe! The auto rider, mounting his Yamaha PW50, displayed a sensational amount of courage, braving a circuit that even the older riders expressed difficulty in tackling. Well done, little guy! 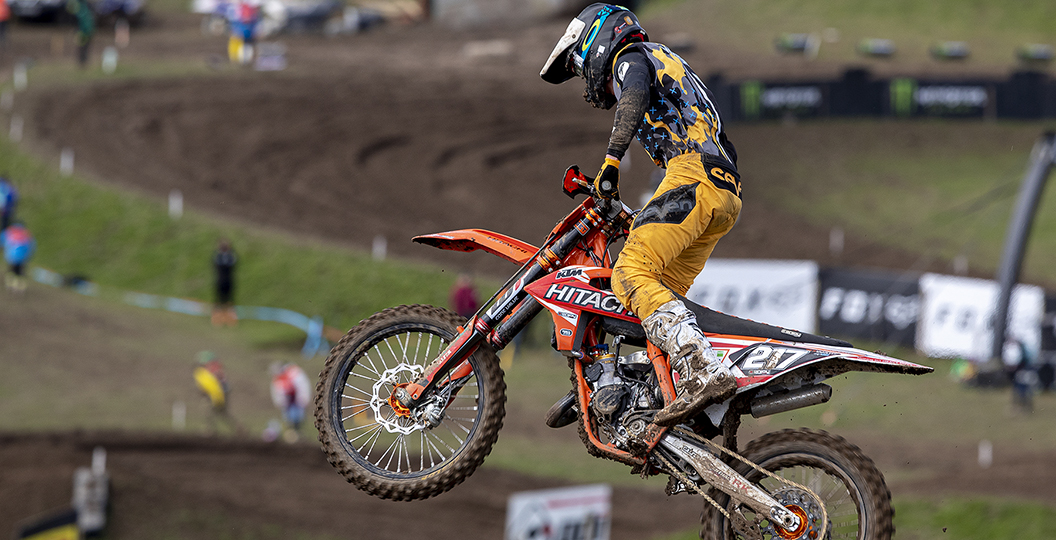