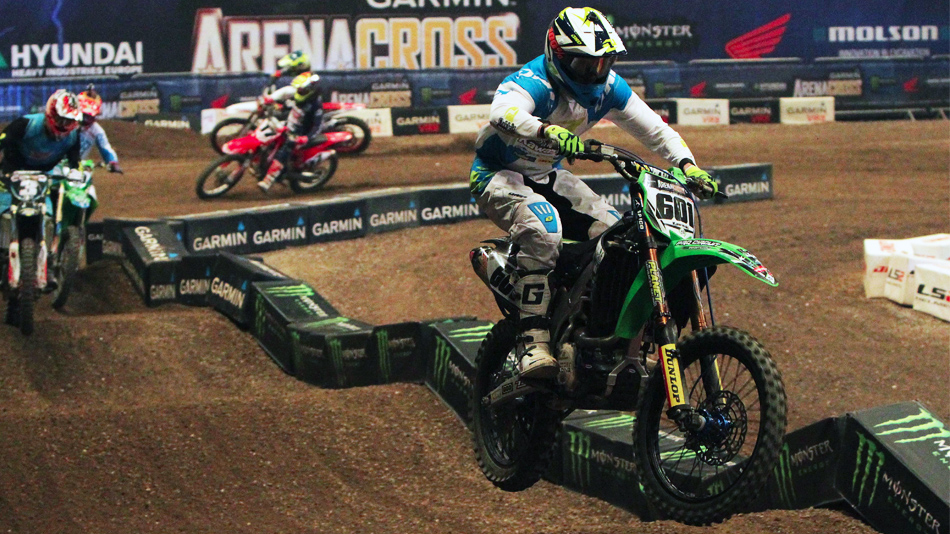 After a week’s break, the Garmin Arenacross Tour returned to London for its grand finale. With the championship already decided, it was now a scrabble for positions further along the standings. Saturday morning dawned bright and sunny, and the weather also remained like this throughout the day, making it a grand day out for many. For Oakleaf Kawasaki, it also meant the return of rider Tyler Villopoto.

The morning’s qualifying sessions got underway on time; at the end, riders Romain Biela and Villopoto qualified in tenth and fourteenth respectively.

For Villopoto, this round was a last shot at redemption. His first heat got off to a blinder of a start; third in the first lap, he soon moved into second, where he remained until two laps from the end, when two rivals forced their way past him. The second heat saw him end in sixth after an early mistake cost him two places and he played catch-up. The final ranking saw him tied for tenth and relegated to the LCQ. Just like much of the series, the LCQ also did not go to plan. He found himself in fourth, and with a lap to go, he ended on the sidelines. The DNF spelled the end of his evening.

Biela on the other hand improved his luck throughout the evening’s events. After a bad start in the first heat, he recovered to seventh. He then improved on that in his second heat with a fantastic third place at the finish flag, after starting in the back of the pack and battling hard throughout the race. Once in the main event, Biela found himself unable to make much more progress against other rivals, finishing the event eighth and taking home an eleventh place in the championship.

Separately, Oakleaf Academy rider Ben White also improved his position by the end of the evening. After qualifying last, he finished his main event in a solid tenth despite a mistake at the beginning of the race that cost him several places. With his results throughout the tour consistently in the top ten, he was also able to take tenth in the Small Wheel 85 championship.

“Well, for most following the team there is probably a lot of disappointment, this has been a hard task to adjust to for sure, we have had injuries, fill-in riders, highs and lows but we gave it our best shot and done everything that has been demanded from the promoters. Tyler and Romain have been great riders to work with and both have gained experience in how hard British racing can be. I can’t fault the show one bit, the atmosphere has been great, but trying to adjust to the indoor conditions just hasn’t worked out for sure. Some you win, some you lose; this has made the team stronger mentally and I would just like to thank all involved with the team.”

“Wembley was a good race for me, apart from a fall in the first heat. You needed to have a good start, and I was not too successful. An eighth place finish is good; I proved that I had the speed by finishing third in heat 2. I would like to thank the whole Oakleaf Kawasaki team, which is like a big family and I felt good there. I will train hard in France and hopefully be back in 2015.”

“It was a repeat of the last round. Four people tied for points, and I ended up being the guy who didn’t make it. I went to the LCQ and spun on the start, and in the LCQ and any moto out there it’s down to the start, it just wasn’t my season, it wasn’t my night, at least I wasn’t on the ground. I qualified decent, had decent heat races and rode quite well, and in the LCQ got taken out by a little dude, but it’s part of it, that’s racing. I’m in one piece and got to race the next outdoor season, so we’ll go from there. I might be back next year, and hopefully redeem myself over here.”

“I got a fairly good start, which was different for me, I got pushed wide on the corner, but I battled on and a few people dropped it which pushed me up, so I finished tenth. I could’ve had a ninth, which would’ve been better, but I’m not going to leave here disappointed, I think I’ve done fairly well.”my