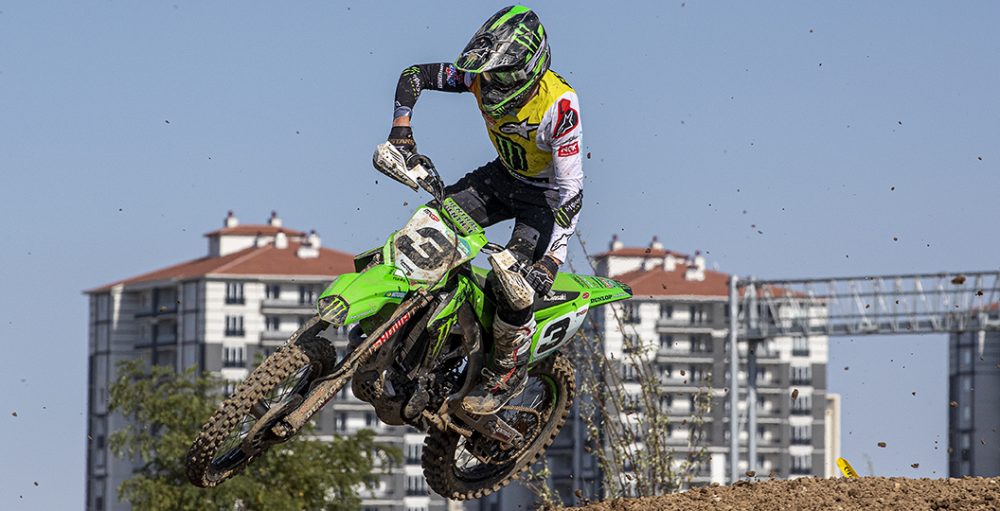 Editor Note: The Next Move

Kawasaki made a poignant announcement in the three-week summer break that the Grand Prix contingent has just worked through. Romain Febvre, who has steered his green machine to one Grand Prix victory thus far this season, has signed a two-year deal with Kawasaki Heavy Industries, thus ending all speculation that he was heading elsewhere.

It is known that Febvre did indeed have another offer that was quite tempting and then the changes to the Kawasaki factory effort complicated things further. There was a lot of speculation running rife through the paddock, for reasons such as those, and Kawasaki made this news public to curb that. Febvre can focus on the task at hand now, delivering a world title for Kawasaki. Success has escaped the Japanese manufacturer in the modern era and he could be the one to change that. Well, that is the hope!

This is also why signing Febvre was such a crucial move for them. Kawasaki race for wins in every discipline, like indoors and outdoors in the USA, and that is the expectation in the FIM Motocross World Championship each year. Had they not secured the services of Febvre, who would they have possibly signed as a lead guy? Calvin Vlaanderen is on the market, as is Arminas Jasikonis, and those are elite riders, but going racing with those two would mean that trophies would be few and far between.

Kawasaki will remain interested, now that a win is possible on any given weekend, and that is a relief. There has always been a sense in the paddock that Kawasaki would be the next manufacturer to follow Suzuki to the exit. This is almost confirmation that they are committed to this thing. Hurrah! Moving the factory team elsewhere (heavily rumoured to be operated by the Finnish IceOne crew) is yet another sign that Kawasaki are rather eager to become more of a force in the paddock. Heck, they need to do that.

The Grand Prix victory that Romain Febvre secured at the Flanders-Belgium event was the twenty-third for Kawasaki since the KX450-SR was first introduced. A respectable figure, of course, but both Suzuki (28) and Honda (49) have so much more. Yamaha (68) and then KTM (120) are in another league. There is not a true explanation as to why they have struggled to amass multiple wins in a single term in Grands Prix – the bike has arguably been the most dominant over in the United States.

Kawasaki have a promising plan for the future now, which is most important. There is no word on who their second rider will be, but it is thought that someone has already signed there and that effectively pulls them out of any silly season chatter. The entire paddock was waiting for the Febvre domino to fall and, now that it has, other contracts can be done. Jorge Prado is another guy who most have been waiting on, but it now sounds as though he is going to stick with the Claudio De Carli squad and move to GASGAS.

Prado confirmed just that to MX Vice in an exclusive chat at the Turkish Grand Prix, stating that the rumours were simply uninformed people getting carried away. Prado does have a KTM Factory Racing contract until the end of 2023 – there is not much to say beyond that. There is still some uncertainty over at De Carli though, as it remains to be seen what Antonio Cairoli is going to do next term. There is a press conference in Rome on September 14 that should reveal more about his future. Time will tell.

Now that both Febvre and Prado have their futures set, there are two riders who are undoubtedly the most promising free agents. Ben Watson has an option with Monster Energy Yamaha Factory MXGP for next year – it is up to the team to decide what they want to do – and no one knows what is going to unfold there. It does seem to be trending in one direction, but if he is dropped from the factory effort then there is no doubt that he deserves a factory seat.

There are potentially spots at GASGAS, Husqvarna and Kawasaki. Calvin Vlaanderen is another rider who is almost a guarantee for one of those positions based on current form, as he has proven that he has top-five potential on multiple occasions with the Gebben Van Venrooy Yamaha team. If either Watson or Vlaanderen miss out on a factory seat then it would be diabolical – there are spots out there and managers should be banging on their doors to secure signatures.

Put simply, there is such a long way to go in the Grand Prix series. Ben Watson, Calvin Vlaanderen, Arminas Jasikonis, Brent Van Doninck, Henry Jacobi, Arnaud Tonus (it sounds as though Hostettler Yamaha are going to close their doors) and more remain on the market. There were some decisions made in Turkey, so there could be announcements as soon as next week, but the Grand Prix of Sardinia will be crucial for more than rider.