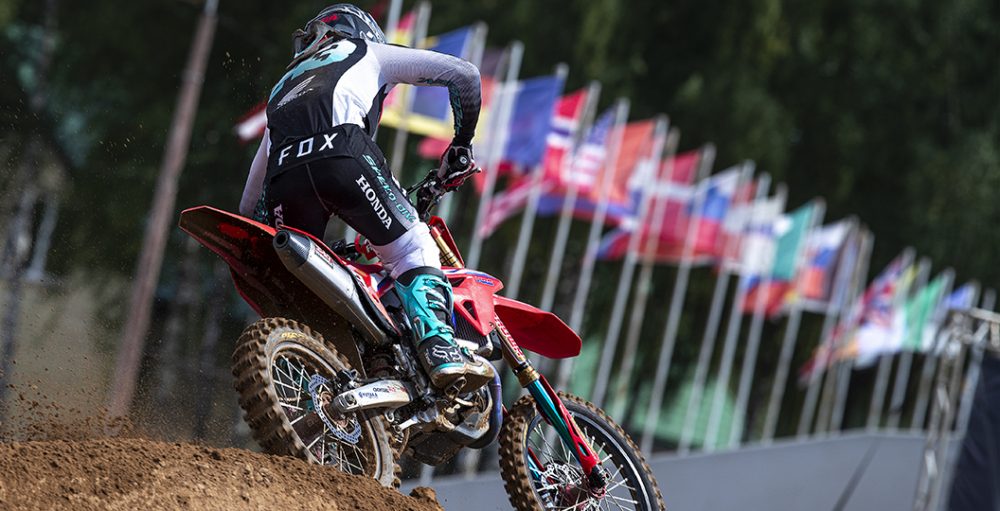 It has been fairly tricky to pick a favourite through the first seven rounds of the 2021 FIM Motocross World Championship, as momentum has changed hands so much over the last two months. Antonio Cairoli, Jorge Prado, Jeffrey Herlings, Romain Febvre and Tim Gajser have all been considered ‘the guy to beat’ at different points. It has been odd, in a sense, seeing as the red plate has been locked onto the CRF450RW that Gajser pilots since the very start of the season.

The way that Gajser performed at the first round, the Grand Prix of Russia, was phenomenal. It would have been extremely tricky for anyone to beat him, had he maintained that level in the races that followed. That has proven to be tricky though and, amazingly, he has not actually won a moto since the second event back in June. It has been two months since he was the first rider to reach the chequered flag. There have been two more Grand Prix victories since then though – those coming from consistency (a 3-2 scorecard at Oss and then a 2-2 scorecard at Kegums) rather than dominance.

Gajser is the only rider to win more than one Grand Prix this term, has not relinquished the red plate at all and is sat on a lead of 13 points following round seven. Yet it does not quite feel like he has a grasp on this thing and that is a fact that is undoubtedly fuelling his competitors, the four riders mentioned at the top of this article, in this three-week hiatus. There is a reason for each of those guys to believe that they have the current championship leader covered – it is that sentiment that is making this on-track fight a historic one. Parity like this has never been seen before.

It does feel as though Gajser is aware of that fact, despite his commanding statistics, as even he mentioned that the pressure started to get to him at rounds five and six. Gajser was coming off of a Grand Prix win and had a 23-point advantage at that point, so on paper there was no reason for him to be overthinking the situation and piling the pressure on. The on-track action tends to tell a different story to the results though – that is why he was eager to stake his claim before the break. A win at the Grand Prix of Latvia helped him do just that, right?

It is debatable. Gajser was seemingly relieved to get back on top and claim momentum, but he was not the fastest guy at that round. The bonus cheque will still cash and he can take some comfort from the fact that his championship advantage went back into double digits, but his peers had the ability to ride away from him and that must linger in his mind. The quickest rider does not always win and consistency is a valuable trait, of course, but it is still so early in the season and there are many contenders. It is far too early to play that game.

The Grand Prix of Turkey is going to be poignant for that very reason. It is the start of a long stretch of races in a row, so momentum is suddenly going to become much more crucial. Afyonkarahisar is a track that fits the skillset that Gajser possesses rather well. It does not have elevation like Orlyonok in Russia, but the soil is not too dissimilar and it is a jump-laden layout. There are going to be many fans who expect him to make a statement at the eighth stop and doing so would remind everyone why he has sole possession of the red plate. If he flounders in fourth or fifth, however, then that would be another chink in his armour.

There is more to come from the 2021 FIM Motocross World Championship. There have been so many twists and turns across the first seven rounds and a case could be made for any of the ‘big five’ being the favourite. There are others, who are not quite in title contention, like Jeremy Seewer and Glenn Coldenhoff too! A season has not been as unpredictable as this since 2008. Bring on the second half.