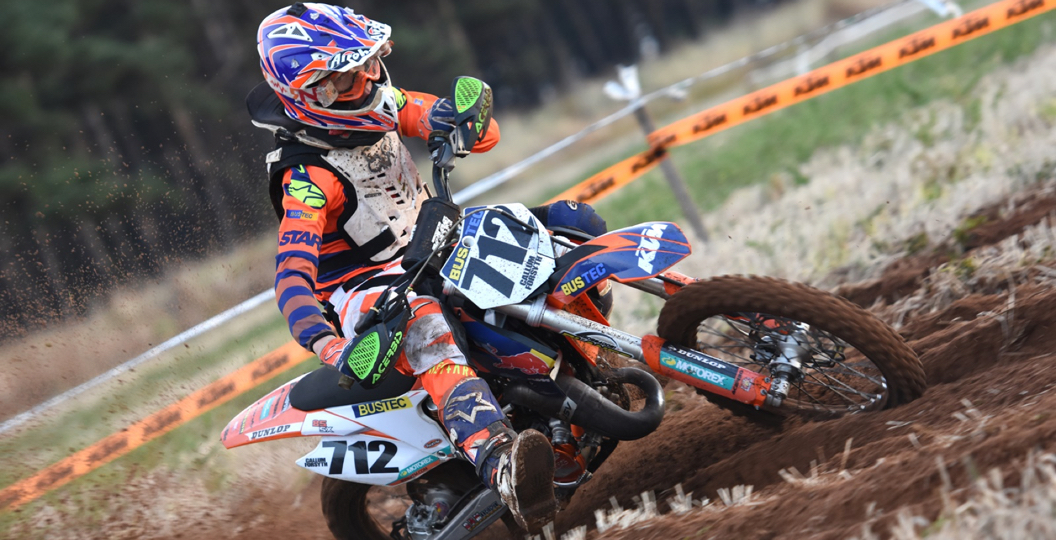 The opening round of the Ecosse XC Winter Series on Sunday the 3rd of December, sponsored by Drysdale Motorcycles, Wulfsport and Rock Oil, welcomed almost 200 riders to the deep sandy circuit of Dunbar on the south east coast of Scotland. With a blue sky and a good crowd of family and friends, racing for the eight packed classes, from 65cc through the ranks to Vets, got underway on time and ran trouble-free until dusk.

In the Adult A class, Carlton Husband on his Phoenix Tools Honda ran away with all with three motos, winning by a country mile – no one got close. Behind him a cracking battle down to fifth place was unfolding throughout the day. Nathan Claugan, who has just stepped up from the schoolboys, pushed Jay Hague hard and took advantage of the older rider’s slip up in the first race to take second place, with Hague in third. Hague’s experience shone through, however, and he bounced back to finish second in the next two motos and second overall. Scott Patterson kept out of the Hague/Claugan tussle to finish fourth overall and Reece Wilson, a professional Downhill MTB racer, took the fifth spot. In class of 450 and 250 four-strokes, the sole 125cc rider Andrew Bisset, riding his enduro bike, managed to achieve his ambition of breaking into the top 10, with a ninth place overall.

The largest entry, with 38 starters, was the Adult B class. Robin Bertram won the class with a win, a second and another win, whilst Paul Benham’s second in the final moto was enough to earn him second overall, beating Steven Lennie by one point.

The Adult C’s also had a healthy turn out and in the first two races, eventual winner John Lamont and second-placed Stephen Cowan enjoyed a set of closely-fought battles, often just a tenth of a second apart. Gordon Peterson finished a steady third.

Due to the large number of entries, the club introduced a Vets class and this group ran with the rookies;

Scott Murray had great day with three out of three but was pushed closely in the final race by holeshot artist Ian Wilson who had decided to give his new bike a run out. Wilson finished third overall with two thirds and a second and Alan Thain a strong second, with two seconds and a third. Wulfsport’s Bill Brown put in an appearance on track but a DNF in the final moto saw him placed down in 25th.

The Rookies were set off 10 seconds behind the Vets but the young schoolboys were very quick and didn’t stay behind for long. Gregor Campbell put in a stand out performance and won the overall Rookie class, despite a losing time in the final when his brake seized. Dominic Stevenson pulled out all the stops in the last race to take the overall combined win from 10 seconds down.

In the youth 85s groups, Sam Atkinson won all three big-wheel classes and Ollie Colmer did the same in the small-wheel category. In the former; Atkinson was closely followed by Ayden Smith with three seconds and the Logan Ferguson in third who had raced hard with Jack Winthrop. Colmer, who has just moved up from the 65s dominated the small-wheels but was chased home by Jay Cheel with two seconds and a third, and Jack Fletcher with a second, third and fourth. Flying the flag for the girls was Cristina Palmer, racing for the first time after breaking her wrists earlier in the year; after a couple of DNFs due to machine failure she got out for the final race and finished a valiant fifth.

Ryan Waggot took the overall win in the smallest capacity class with a third and two wins. Opening moto winner Graham Haddow couldn’t keep up with dominant Waggot in the second two and Conner Smith was third overall with a consistent set of finishes; second and two thirds.

The next round of the Ecosse XC Winter Series will again take place at Dunbar on the 7th of January 2018. Prior to that, the club is running a practice day on the 27th of December using the same track and set up.