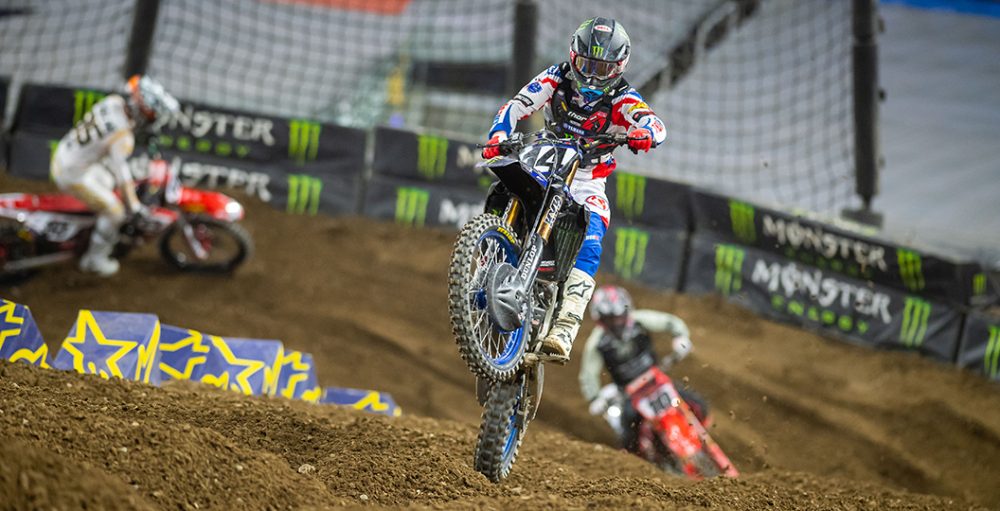 Dylan Ferrandis has had a turbulent time of it since the 2022 Monster Energy Supercross series begun in Angel Stadium on the first weekend in February. Mediocre starts have stopped him from fulfilling his potential indoors and also prompted him to get caught up in some wild incidents, leaving him battered and bruised. Those regular mishaps have prompted some back pain that restricted him in the main event in Minneapolis, round seven of the current season, as he revealed on social media.

“Unfortunately tonight I experimented [sic] some violent back pain after only a few laps in the main event, the crashes I had the last rounds finally got me. Some rest this coming week and I’ll be back.”

Ferrandis still finished ninth – his fifth finish in the top ten in seven rounds – in the premier-class main event in Minneapolis. Ending the first lap in eleventh ensured that he was unable to do much on a track that made it tricky  for even the very best riders to push. Although the results show that Ferrandis ended ninth, the series standings tell a rather different story. Ferrandis was docked four points following the main event for jumping on a red-cross flag. 10 points were received rather than 14.

Ninth is the spot that Ferrandis currently occupies in the premier-class standings. 24 points separate him from the reigning champion, Cooper Webb, in fifth. 49 points is the deficit that he faces to the series leader after just seven rounds. Ferrandis’ season is remarkably similar to his first aboard the YZ450F season; he had one podium at this point last year and just five points less than he does now. Unfortunately, he was tipped to achieve much more after winning the 450MX title in Lucas Oil Pro Motocross in his first attempt.