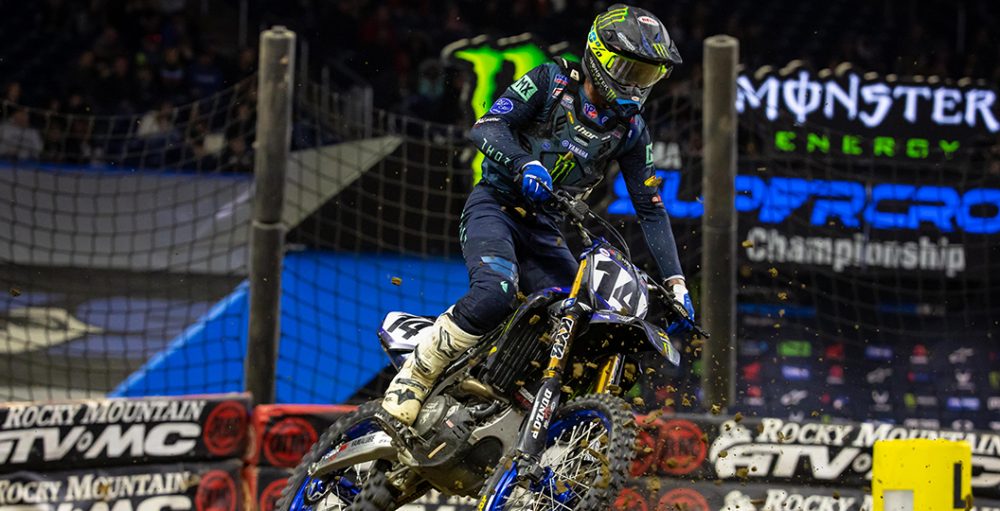 Incredibly, both Cooper Webb and Chase Sexton will be at this weekend’s Indianapolis Supercross. Those riders were able to escape unscathed from the brutal crash that ruled them out of the Detroit main event prematurely. Dylan Ferrandis, who did not actually fall, has been sidelined though. Ferrandis was seen rolling off the track just a couple of laps from the end, as he jammed his wrist and was in too much pain to continue. Said pain is set to rule him out of round eleven, Indianapolis, as well.

“Unfortunately, I will not line up at Indy this weekend. During the main event in Detroit I took a deep rut on the on-off jump and landed too short on the front wheel, didn’t crash but my right wrist absorbed all the impact and I had to withdraw from the race. Diagnosis shows nothing is broken, just bone bruise luckily, but the pain and soreness will not allow me to ride at the level I am suppose to. It’s been a tough first part of the season so far and I am very frustrated to have not been able to show yet what I am capable of, but it’s part of racing. Glad I have a good team and people around me to be supportive in this difficult time.”

Ferrandis has had a turbulent time of it in 2022 Monster Energy Supercross. Struggling to establish consistency in his sophomore season, he is currently eighth in the championship standings and has just one podium finish to his name. Ferrandis has three top-five finishes through eleven rounds and has been outside of the top ten three times. Few expected such poor results from a man that some had tipped to be a championship contender, off the back of his outdoor success.