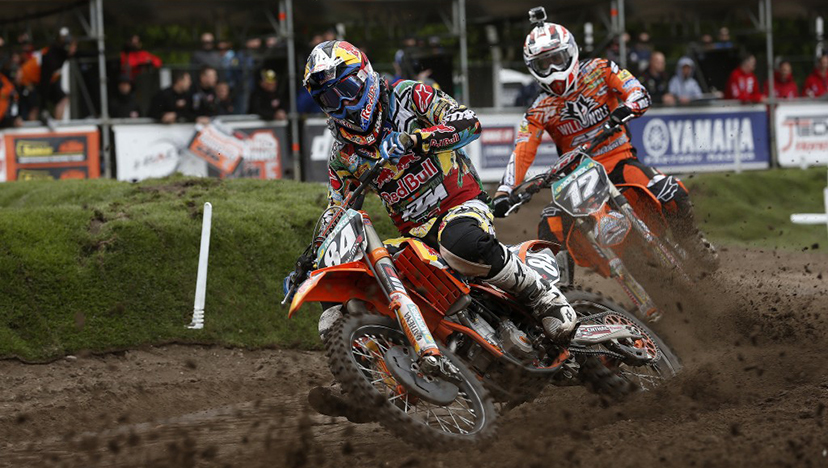 Red Bull KTM Factory Racing’s duo Antonio Cairoli of Italy and Dutch rider Jeffrey Herlings were in top form on the Dutch sand track at Valkenswaard on Sunday winning their respective MXGP and MX2 GPs in Round Six of the World Championship.

Tony Cairoli is six times undefeated at Valkenswaard and Jeffrey Herlings has now claimed his fifth consecutive victory at this track. Both leave the venue with the red plate as championship leaders.

Jordi Tixier, the KTM factory team’s French MX2 rider continued to show a return to form by picking up his second podium in two consecutive GPs. Cairoli’s MXGP teammate Ken de Dycker had a tentative return to racing after a very long injury break and while it was great to see Keeno back in action, it was more a training ride for the Belgian rider. Doctors only cleared him to ride late last week and he still has to recover fitness and race practice. His last race was at the MX of Nations in 2013.

Herlings unstoppable in Valkenswaard
Herlings got the action underway on his KTM 250 SX-F at the Dutch circuit in front of a sell-out crowd, many of whom came to see him work his magic on his home circuit. Jeffrey did not disappoint. He sealed the first moto by a winning margin of 1:07 minute and the second by almost 46 seconds even after slowing down in the final lap to acknowledge the crowd. Herlings has never dropped a point in his five consecutive wins here for the Red Bull KTM Factory Racing Team.

Herlings: “It was a great weekend. I won my qualifying heat and both motos. I took two okay starts and we went from minus four points to plus 15 in the championship. We’re back on the red plate and hope to keep it. I’m Looking forward to Spain and hope to get another win there.” Herlings said he always got an extra boost at his home GP. “I know these tracks and to win here for the fifth time is just amazing.”

Tixier too was in blistering form in his opening moto and started with the holeshot in his second outing. Two crashes in his second race dropped him down to fifth in race two but still allowed him to take the third podium spot.

Tixier: “This is my second podium in a row and its always pretty good to be on the box. I had a good start in the first race, my rhythm was good and so was my speed. I got the holeshot in the second moto but then I crashed twice. My handlebars were a bit twisted and I have a little bit of pain in my wrist. I managed to finish fifth. Its not what I expected but I’m quite happy with my weekend.”

Cairoli impressive in MXGP
With Herlings having set the tone for the Orange factory team in MX2, championship leader Tony Cairoli made no mistake about his intentions in his opening MXGP moto and quickly stormed into an impressive lead. He looked effortless on the sand track but about three laps before the end of the race he started to have difficulties with his front wheel. He dropped off the pace and made a masterly job of nursing the bike home in third place.

His second moto was a trouble free triumph on his KTM 350 SX-F from gate drop to checkered flag and his 3-1 result put him on the top step and earned him more valuable championship points. He now has a 31-point lead.

Cairoli: “For sure it was my goal to win here today and I’m happy with my 3-1 and especially for the championship. I was going for my sixth win here and Jeffery was going for his fifth. We both love riding in the sand and we really enjoy this kind of surface.” Cairoli was also safely out in front and unaffected by a pileup of riders in the second moto that took out his close rival Gautier Paulin. “I am sorry that Gautier went out and I hope he will be back racing very soon,” he said. Asked if he had taken risks in nursing the bike home in the first moto, Cairoli said: “It could have been dangerous on the landing on sum of the jumps but I was trying to control it and hoping that everything was going to go well.”

Another highlight on Sunday was a victory in the EMX125 by young Dutch KTM rider Davy Pootje, who took an impressive and decisive victory in his races to underline that the next generation of top KTM riders is being properly nurtured.

Pootje: “It was really special to win my first European GP at home in Holland. I wasn’t riding that good in the first moto but I went really well in the second moto and I’m happy with it. The crowd was awesome.”