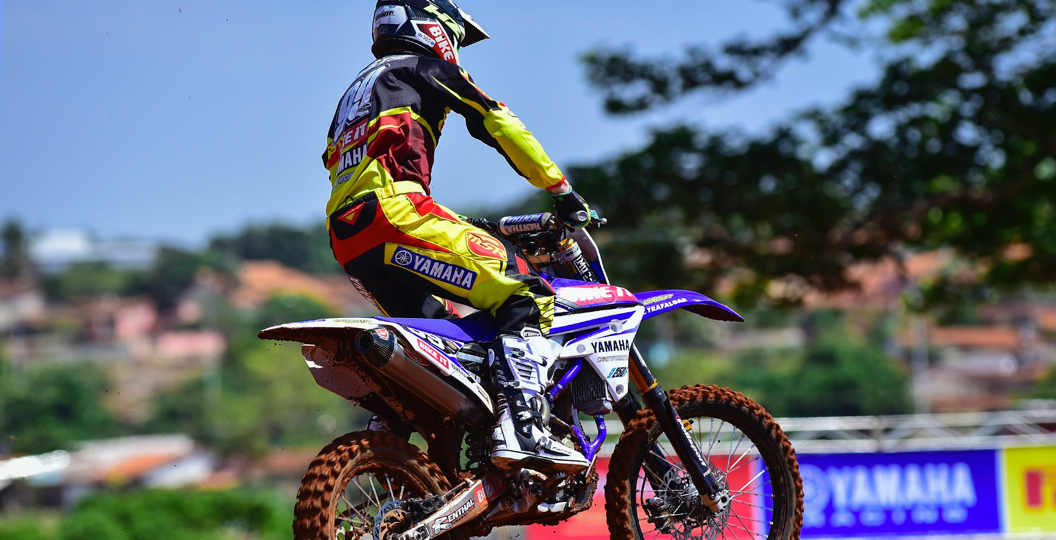 The Grand Prix of Goias at the new and impressive Trindade circuit brought the 2014 FIM Motocross World Championship near to a conclusion for the Yamaha athletes and teams of the MX2 category. The sixteenth round of seventeen was played out on the hard-pack red dirt close to the city of Goiânia and under blazing sunshine Yamaha Factory Racing’s Christophe Charlier was the top YZ250F runner with eighth place overall and two positions in front of Bike it Yamaha Cosworth’s Max Anstie.

Jumps and more jumps: Trindade was as spectacular as it was demanding through the concentration it required and the plus-thirty degree temperatures. Twenty-five thousand spectators sought shade in the grandstands for the second Grand Prix of the year to take place on Brazilian soil.

Charlier had the speed to trouble the top ten and threaten the leading group but the Corsican could not master his starts on Sunday. An unspectacular first moto resulted in eighth place but the former European Champion was more attacking in the second dash and moved up from a first lap slot of eleventh to scoop seventh by the flag. Mexico next week will represent his last meeting in MX2 before moving to MXGP for 2015.

Anstie, winner of the previous round in the sand of Lommel and the first rider to give the 2014 YZ250F its spurs at FIM MXGP level, was also handicapped by his lack of prowess out of the gate and the British team couldn’t quite optimise the ideal setting to assist his launches for the two thirty minute and two lap motos. Anstie rode steadily and determinedly but could do no better than twelfth and ninth for tenth overall. The Englishman is currently eleventh in the MX2 standings as the FIM Motocross World Championship moves north and west to Mexico for the final Grand Prix of the season next week.

Christophe Charlier: “I didn’t start well today and it was hard to pass on this track. There are a lot of big jumps so it was difficult to make the time. Overall not such a good day and now I hope it will go better in Mexico.”

Max Anstie: “It was my starts today that held us back. We didn’t quite find the right setting to get off the line and when you get out near the front then you run at the front. The bike worked fine and I could feel the work we’ve done in the break and since Lommel. I think I just missed a bit of that confidence by being able to get in the mix from the beginning. I rode my laps and tried to make positions but a lot of people were at the same pace. Anyway, one more to go, and we’ll look towards the box again in Mexico.”