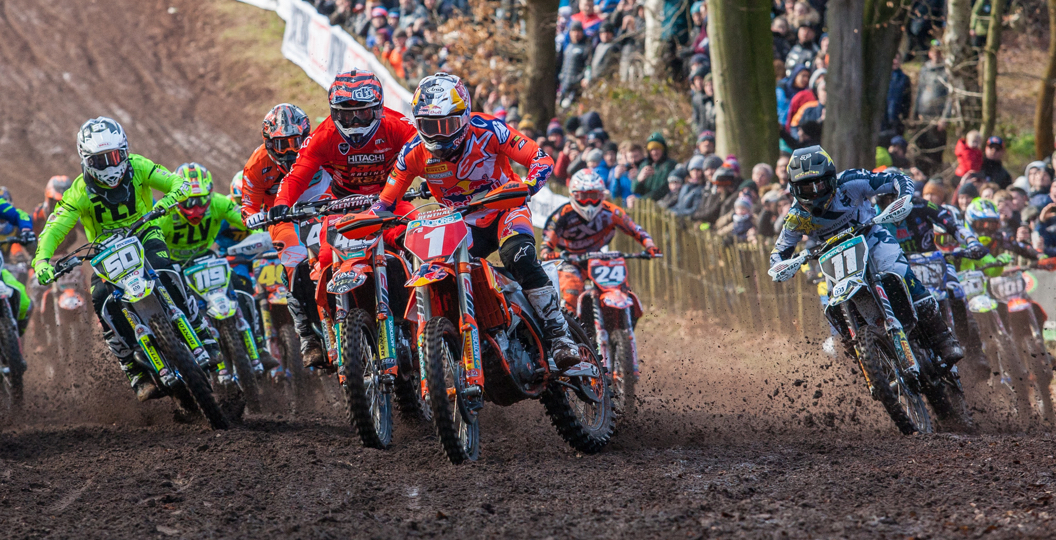 There were so many intriguing stories to follow at the Hawkstone International. Jeffrey Herlings emerged as the overall victor when it was all said and done, however, which was not overly surprising. There is no way that one could call him dominant though, as Glenn Coldenhoff and the Rockstar Energy Husqvarna Factory Racing duo kept things close all day. The greatest advantage that Herlings had was just over two seconds and that paints a picture of intense racing. It was more like a chess match than a titanic duel though, because the track did not exactly allow for multiple passes.

It did not get as rough as normal, for reasons that no one really understood, and that just produced a one-lined layout. Perhaps that was why Jeffrey Herlings was so reserved through the opening laps? It was so difficult to pass that he was just waiting for an opportunity to open up before pouncing or for his teammate to tire and make small mistakes. After doing some digging and talking to those on the track crew, it seems that even they are confused why it ended up that way. The weather was not great in the days prior to the race, of course, but it was not like it was frozen or a swamp either. One guy even remarked that he had never seen Hawkstone Park like that before.

There was a point where Max Anstie pushed past Glenn Coldenhoff and then lost the position moments later, but that was only because the latter really forced the issue. It just had to be done with the state of the track. In fact, times were so close that there is no doubt that the start dictated how the race was going to go. Max Anstie was more than capable in moto one of three and probably could have beaten Herlings, had he started ahead of him, but there just were not areas to make up time. The table below paints the picture.

Glenn Coldenhoff was undoubtedly the biggest surprise and turned everything upside down really. What does this mean? Is he now on the same level as Jeffrey Herlings? Was Herlings not firing on all cylinders? Did it just come down to the fact that the track did not allow the elite riders to shine through? There may be some weight in the latter, but then the top four were often a minute ahead of the rider in fifth. There was clearly separation there. Another pre-season international is in the books and, much like at Riola Sardo, more questions than answers have emerged.

Tommy Searle improved every time that he hit the track, which was positive after a so-so first moto, and even latched onto the leading riders towards the end of the day. There were even points where his lap times were really competitive. It has been well-documented at this stage that a track such as Hawkstone Park is not necessarily where he shines, so recording a performance that was quietly positive was certainly encouraging. That is undoubtedly the best way to categorise his ride – it is unlikely that anyone left the track raving about how great he looked.

The premier division had the biggest names over the weekend, but it was very top heavy. Things dropped off rather quickly once you reached eighth or ninth. Evgeny Bobryshev, Graeme Irwin and Nathan Watson kind of floated between the elite guys and then the rest. It created an odd dynamic. There were a handful of domestic riders who managed to shine through, because of that, such as Ryan Houghton or Mickey Eccles. The latter even kept Tommy Searle on his toes through a portion of the first encounter. Nathan Dixon deserves some recognition for a promising debut aboard the bigger bike too, although most would have failed to respect the valiant effort that he registered.

Speaking of the British riders, the battle that is currently brewing in the MX2 division is extremely exciting. Ben Watson, Adam Sterry and Conrad Mewse are all at a point where they need to make that next step up in their respective careers. It is obviously going to be difficult for all three of those guys to do, seeing as spots on the podium are so hard to come by, so who is going to be the one to grab this thing by the reigns and charge forward? The first blows were exchanged at Hawkstone Park and it is actually difficult to determine who performed the best.

Conrad Mewse was the quickest rider at this specific race, out of this group, and he probably would have finished third in that second encounter, had there been a little more time. A brace of fourths left him third overall on the day though and it was just a positive outing all around. Whilst hunting Adam Sterry down in moto two, Mewse was actually the fastest guy on track by a considerable margin. The times that he recorded are below.

It would be easy for someone to argue that Pauls Jonass had backed it down, as he was out front and had the race under control, but the table above starts at the halfway point and Thomas Kjer Olsen was nipping at his heels at that point. It did still seem as though Jonass could have turned it up had he needed too though – his performance was remarkably similar to that of Jeffrey Herlings. It was actually encouraging to see, as he got a little ragged in Italy last weekend and started to look like his former self. It certainly was not the same composed guy who charged to countless podium finishes a year ago. Perhaps the level of competition at Hawkstone Park had something to do with that?

Heading into the race, one would have presumed that Thomas Kjer Olsen would give Pauls Jonass all that he could handle. Olsen is expecting to go after the title this season, after all, and will have to go through the reigning champion. Things just did not seem to gel until that second moto though. The fact that he spent Saturday in hospital undoubtedly had something to do with that, as he got off the plane and was doubled over with severe stomach pains. It sounds as though that was not even a factor during the motos. However, even if that was the case, it would not leave you in a great place mentally.

Thomas Kjer Olsen is undoubtedly going to be in the mix in the FIM Motocross World Championship this year and win races. Is he going to be a legitimate title contender though? It is difficult to put him on the same level as Pauls Jonass, Hunter Lawrence, Jorge Prado or even Thomas Covington and Hawkstone perhaps reinforces that. There is no doubt that he is right behind that group though. It would actually not be surprising at all to see KTM and Husqvarna win an overwhelming majority of the rounds, thanks to those four guys, as Hunter Lawrence appears to be the only one stopping them from complete domination.

One of the most intriguing aspects of these pre-season internationals has been seeing how some of the EMX250 stars compare to the established MX2 riders. Mikkel Haarup immediately stole headlines in qualifying on Sunday, as he slotted into second in qualifying and was just three tenths slower than the reigning world champion. The rest of the field were almost two seconds down on his time. Kevin Horgmo was rather impressive too, but Martin Barr really upset the applecart. Barr was extremely competitive and, hey, if he carries that speed into the EMX250 opener then the sky is the limit. Who saw that coming?

Jago Geerts, the third rider on the Kemea Yamaha squad, is struggling with arm pump at the moment. It seems as though that is a recurring theme, so he is working with a physiotherapist on the team to try and sort things out. Geerts is not full-time currently, as he is still finishing school, so that may make it slightly more difficult for him to iron things out. The initial signs are positive though and he is on a three-year deal – the team are in it for the long haul. They actually signed him in April last year, believe it or not, so clearly think that he will turn out to be one of the greats.

A final point to consider. Where was Jordi Tixier? It seems that no one noticed that he did not even start the races, despite registering a competitive qualifying time, but we finally got an answer from the BOS squad. Tixier sustained a thumb injury in the days prior to the Hawkstone International and the pain prevented him from lining up. No specific details have been revealed, but he is not going to race in France this weekend in an effort to get ready for the MXGP of Patagonia-Argentina. There is a little over two weeks to go. 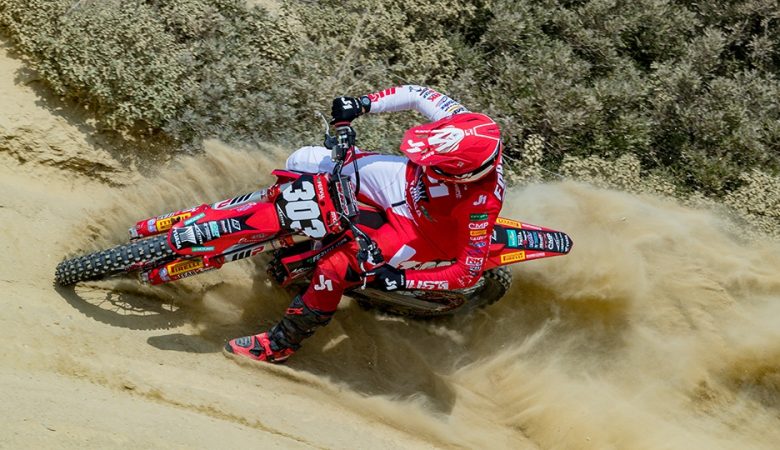 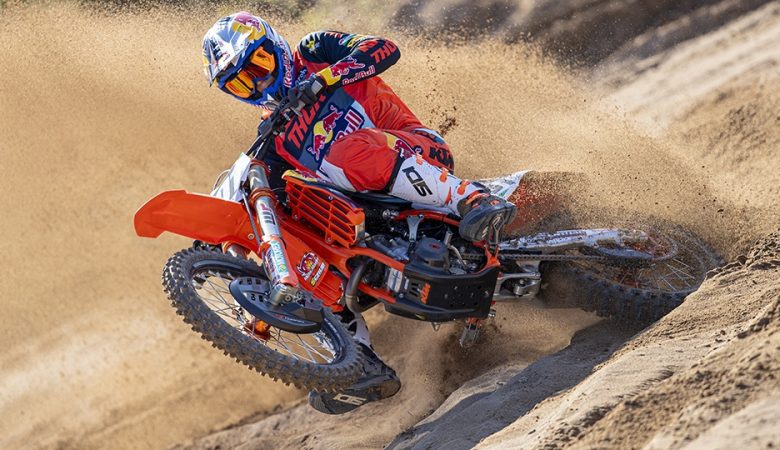 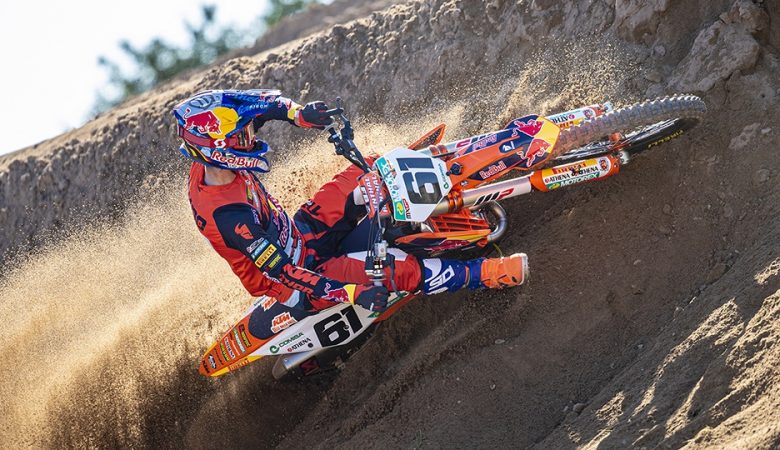 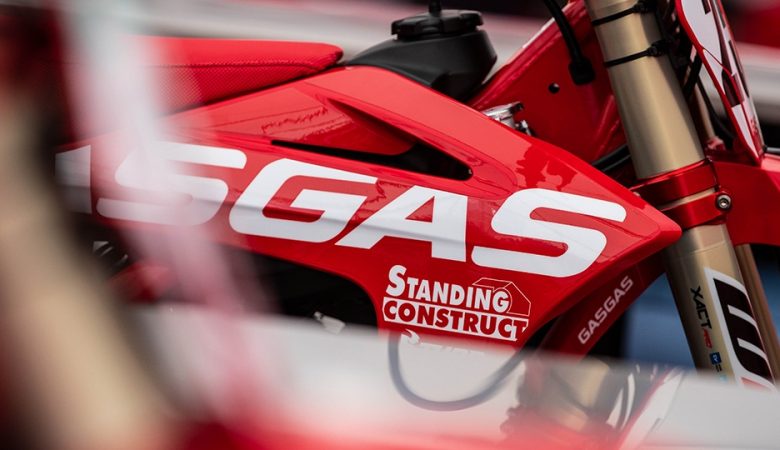